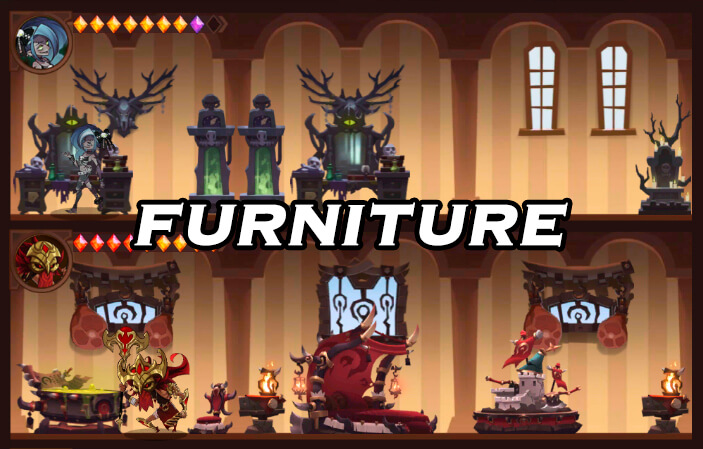 Here is the complete AFK Arena Furniture tier list for both PvE and PvP game modes, coming with a detailed explanation for every single hero in the game for January 2023.

Please do note that this ranking is for Hero Furniture only. For the actual hero ranking, please check out our AFK Arena Heroes Tier List!

You unlock the furniture feature in the Oak Inn as soon as you get your first ascended hero.

The lists below show the best furnitures that you should try to acquire. Put heroes on your hotel wishlist according to the best heroes on that list that you are close to ascending or intend to ascend soon.

As you complete the list above, start investing in the furnitures mentioned below.

As you complete the lists above, start investing in the furnitures mentioned below.

When Should I start building my furniture, and what furniture should I build?

When starting out, save all your Poe coins until you’ve got between 3 and 5 heroes to A. Then I’d look over general priorities and compare them to the heroes that are ascended and those you’re building into.

Try to avoid putting furniture on any heroes low in the tier list, and especially never build a furniture rated very Poor.

When should I use my Yellow/Red Cards?

Use yellow cards primarily on dimensional furniture; It has the lowest drop rate from natural pulls so it’s the technical best value.

For red cards, don’t ever use them on a 3/9 unless you are fully aware it’s not optimal and are doing so for marginal progression.

When using them on a 9/9, make sure two of the furnitures “categories” are filled, this can be seen if you crick on the hero in The Oak Inn.

Should I aim for Duplicates?

Absolutely not, duplicate furniture gives small star bonuses that are extremely weak compared to the raw effects of a new fumiture even on a weaker hero.

A f2p will likely never need to consider aiming for duplicates.

Why is Rowan in Meta if his furniture is weak? Does that mean I build it anyway?

Rowan is a meta hero, he’s known as within the nip 3 in the game constantly, but he is not benevolent. The hero is placed in meta for his performance in every mode of play, but he has an extraordinarily weak set of furniture that should never go over +3, and even validating the +3 shouldn’t be until later on. 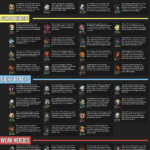 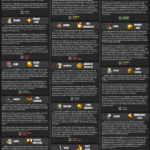 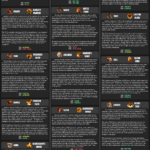 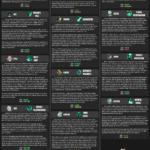 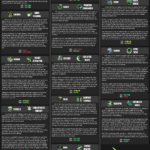 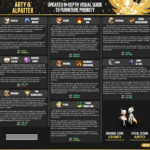 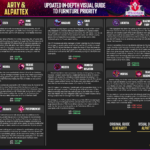 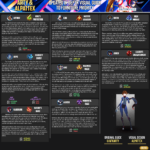 As such, the best time to use them would be when your hero is at 7/9 since that’s the point when a player is most likely to get a dupe for their hero from regular pulls.

I also get the occasional messages asking about furniture after 9/9 or even if any furniture is worth it for the stats.

As it is, while some stats greatly benefit the hero, stats, in general, haven’t been proven substantial enough as consideration for PvE.

As such, it is generally not worth it to go beyond 9/9 as free to play.

That said, it is significant in Legends’ Championship and we might see new information surface as more people test them

White furniture is primarily used to unlock enhancements to core abilities on our heroes, it also serves as an additional source of stats (hero attribute enhancements). This guide analyses the impact of strengthening mythic (M) furniture for stats.

Each furniture can be upgraded up to 3 times, increasing hero specific furniture stats. There are some stats that are unique to furniture i.e. improving your elder tree, gear, or signature item will not provide these.

Crit Amplification (CA) at 30+ (With Abilities)

All fortitude/tank heroes have received healing increased by 6%. For legendary furniture, the improvement is broadly 95%.

All sustenance/support Heroes have HP regen increased by 4.8%. For legendary furniture, the improvement is broadly 95%.

All might / warrior heroes have tenacity, allowing for 44 or 45% chance to resist crowd control effects. This stat is not increased when the furniture is upgraded. For legendary furniture, the improvement is broadly 95%.

Rare Stats that are improved by Furniture

All fortitude/tank and sorcery/mage heroes have haste. Furniture upgrades increase this stat is only increased for these heroes only.

All might / warrior heroes have life leech. Furniture upgrades increase this stat for these heroes only.

Lucretia has 62.4 dodge from fully upgraded furniture. This is an addition to her 50 additional dodge from abilities. Separately, Lucretia has CA from furniture and abilities, tipping her over the 30 threshold.

Rosaline: With fully upgrade furniture, she has a 98.1% increase to her defense, this makes Rosaline the highest defense rating hero in the game.

These 2 effects should stack.

Ukyo + Izold have furniture abilities that scale with the battle, haste has great synergy with this.

Zaphrael, Lorsan, Solise, and Oden gain haste from hero specific attribute boost and from class boost, giving a total of 15 to 17.7 haste.

Belinda furniture ability reduces the enemies’ CR by 35. If this can mean a negative CR rating for the enemy, then her CA would be very valuable.

Athalia’s furniture ability increases damage of normal attacks by up to 80%, 17.7% increased attack speed has great synergy with this.

Link from Twins has the description “Attack, Defense, Crit Ratings, Dodge, Accuracy, and life leech attributes are all increased by 15% of the other union hero’s own attribute values.”.

It does appear from testing that the new attributes introduced by furniture are also passed through the link, for instance, increased attack speed.

This may mean that a Lyca with attack speed furniture enhanced to M+ 3 could outperform other heroes as the link for Saurus vs Wrizz or Soren for example. 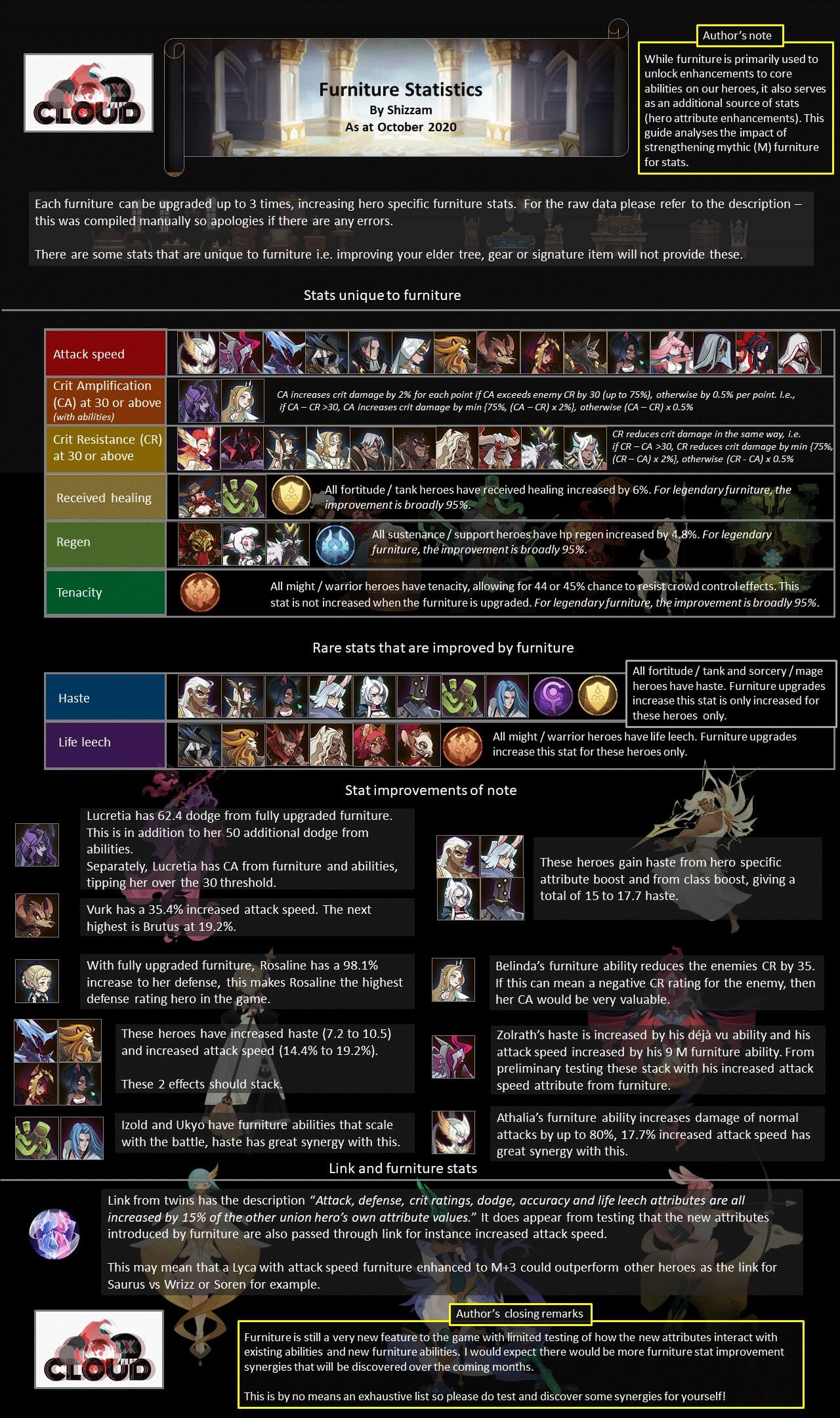