All information regarding Respen, The Windchild, in AFK Arena. 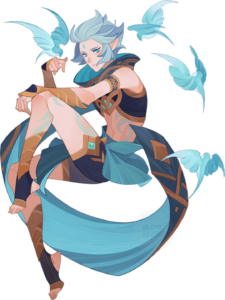 Passive: Respen manifests a Wind Swallow every 3 seconds, which encircle himself up until 5 Swallows exist.

Active: Using his Ultimate ability, Respen sends the enemy with the highest Attack Rating hurtling into the air, dealing 250% damage to them, also stunning them for 3 seconds.

All Wind Swallows manifested by Respen currently on the battlefield will then respectively deal an additional 90% damage to the enemy.

Lvl 2: Damage dealt by manifested Wind Swallows is increased to 120%.

Lvl 3: Damage dealt by manifested Wind Swallows is increased to 150%.

Ability is only activated when a Wind Swallow is next to Respen. Respen commands a Wind Swallow to attack the nearest enemy, dealing 220% damage to them.

If the enemy is not already being encircled by a Swallow, the Swallow will encircle them until the end of the battle.

Lvl 3: Enemies that are encircled by a Wind Swallow have their Accuracy reduced by 80 points and Haste reduced by 25 points.

When Respen is suffering the effects of control abilities, he manifests an additional Wind Swallow that encircles himself, creating a shield that exists for 6 seconds.

The shield has a value equal to 18% of Respen’s own max health. This ability can be used once every 3 seconds.

When an enemy is sent flying into the air, Respen manifests an additional Wind Swallow to attack them, dealing 240% damage to them.

After the attack, the Swallow will return to Respen’s side. This ability can target the same enemy once every 3 seconds.

Signature Item: Mark of the Wild

For every 3 Wind Swallows Respen has manifested, his Attack Rating is increased by 9% and his Crit Amplification is increased by 4 points until the end of battle. Ability can be stacked 4 times.

[+30 Unlocks] After manifesting a total of 6 Wind Swallows, all of the allies will have their Haste increased by 25 points.

3/3 Furniture: 2 Wind Swallows are already encircling Respen when he enters the battle.

9/9 Furniture: Respen commands two Wind Swallows to attack enemies when using his ability “Featured Fury”, if there are no less than 3 Wind Swallows encircling him.