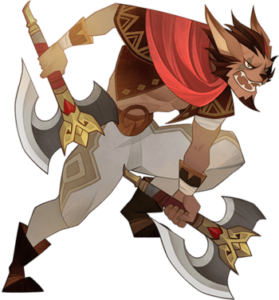 The axes used by Khasos to fell a Mauler chieftain in ritual combat.

Khasos is a versatile hero chosen primarily for his ability to support his allies by granting them all lifesteal, but he also does respectable AoE damage and can tank in a pinch.