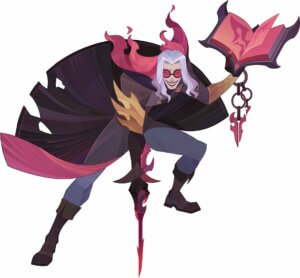 Morrow summons an Eye of Evil that deals 200% damage 5 times to enemies within range. Enemies that are burned are unable to use their Ultimate abilities for 4, seconds.

Morrow summons a spider that cocoons an enemy, dealing 220% damage to them in the process, also preventing them from moving for following 4 seconds.

Morrow releases Korgas behind the enemy that has dealt the highest total amount of damage, and deals 250% damage to them, also manipulating them into attacking their own allies for 6 seconds. While the enemy target is being manipulated, they are unable to use their Ultimate ability and shall not be targeted by the ability “Binding Terror”.

Morrow deals an additional 220% damage to an enemy while attacking them. This ability can only target the same enemy once every 4 seconds.

After releasing Korgas, a murder of crows assail the enemy target, ignoring, their Defense Rating and dealing 100% damage per second to the target until Korgas’ manipulation ends.

3/3: When all non-summoned allies have lost a combined 10% of their health, the duration of debuff effects dealt by Morrow will be extended by 5%, and may be extended up to a maximum of 100%.

9/9: Each time an enemy uses a negative effect on an allied hero, the damaging effects of “Abyssal Retribution shall be dealt to them. Ability may only be triggered once every 4 seconds.