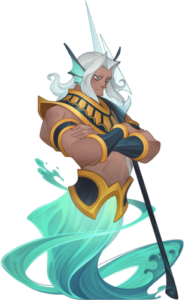 Seirus – Savior of the Sea

A fearsome weapon with the power of crashing waves.

At the beginning of battles Seirus will cause his own max health to increase by 40%, however his current health after the increase will not be at maximum unless restored.