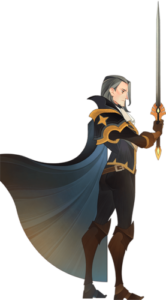 Thane’s damage is increased by 20% if he does not receive damage for 3 seconds.

Thane is a highly elusive Crit-based damage dealer who becomes stronger the higher his crit rate is.

With his ultimate, he deals powerful attacks to random targets while in an invulnerable state, making Thane perform better as the enemies’ numbers dwindle.

He is also the cheapest Guild Hunt damage dealer in the game, capable of dealing consistently high damage and surviving until time out even on minimal investment.

► Skill 3 – Execution: Is a minature version of Thane’s Ultimate skill. This skill descripton is a bit vage but how it basically functions is Thane becomes invulnerable while attacking the enemy 6 times (like his ultimate) except that all attacks hit only 1 enemy. However, unlike his ultimate, this skill only strike up to 6 times (with or without crit). But what makes this skill strong is that it also deals damage equal to 15% of the target’s max hp. This skill is Thane’s single target burst ability and is essential for Thane to be deadly. This skill activates only after Thane have recently hit 4 critical strikes and this skill is not on cooldown. Having a single target version of Thane’s Ultimate makes this Thane’s best Skill as each strike only deal 80% damage so the bonus of dealing 15% of the target’s max hp is Thane’s highest burst damage. When seeking to play Thane, one would be trying to give Thane with as High Crit Rate as possible to trigger this skill consistently and gain the ability to finish off low health enemies as Thane’s Ultimate is too random for it to reliably kill enemies.
Thane’s Ultimate is not his best skill. Skill 3 is his best skill. His ult is only for Thane to safely land crits, healing and set up this skill. So don’t be too disappointed if his ultimate does not deal much damage. It is not meant to be his killing move.

► Before lvl 141: From Early to Mid Game, Thane is almost strictly a Guild Hunt hero due to him being a Fragile Ultimate dependent diver with no energy gain skills. This limits his viability in situations where the frontline is taking alot of damage, which is exactly what the frontline is. If you want to utilize Thane in modes outside Guild Hunt before lvl 141, you will have to utilize heroes who can dive the enemy backline with him(like Silvina) to spread the focus fire, preventing Thane from being attacked by 3 enemies at once from the beginning of the battle. Control type heroes are also good to buy time for Thane’s ult. However, Thane’s ult would not really deal much damage with a single cast so utilize heroes with good focused damage as Thane thrives as the enemies’ numbers dwindle.

► After 141 – SUSTAIN: By the end of Mid Game, Thane jumps from D tier across all non-Guild Hunt modes due to him gaining Healing and Energy gain off crits as before lvl 141, Thane have no way to get healing during his Ultimate skill(even with Khasos), making him a Sweeper with no sustain.

► After 141 – ENERGY: Another issue he had was the lack of focused damage as most of his damage is on his Ultimate skill that distributes the damage randomly accross all targets in the battlefield. This makes him the least effective at picking off single enemies out of all the Sweepers in the game, making his sweep a big gamble early on. However, from lvl 141, he gains 25 Energy off every Crit, granting him a chance to recast his ultimate faster or instanty after an ult cast. This jumps up his AoE damage and Durability exponentially, making him a deadly sweeper that enemies can’t deal with when the RNG is on your side.

► Rarity: Due to Thane being a fragile diver who is also a damage dealer, Thane absolutely needs good rarity to compete outside Guild Hunts. However, he is also the least Rarity dependent DPS in Guild Hunt, making him a great hero to have even at low rarity.

► Low Investment Damage Dealer: Thane deserves the SS Tier due to him requiring little to no investment to deal damage that can rival heroes with 2 rarity ranks above him. Elite Thane can rival Legendary Heroes even with inferior equipments based on experiments. Something other heroes can’t do. It mostly is due to how fast Thane deals damage and his ability to completely dodge the damage of bosses’ skills. Thane is especially effective against Wrizz due to his low damage outside his ult.

► Timing Invulnerability: One can also utilize manual casting to deliberately dodge Wrizz’ Ultimate skill but when playing a Thane below lvl 141, this is not ideal as Thane is too fragile, always the priority target of Wrizz (unless you utilize double dive) and is a hard hero to heal/shield due to his fragility and tendency to be untargettable. But after 141, it is a viable strategy if you are having a hard time surviving until time out on auto.

After 141:
Thane becomes the best Survivalist hero in the game due to him finally gaining Energy Gain and Health Regeneration. This allows him to cast more of his ultimate ability and the sustain makes sure he is (most often) never vulnerable outside his ultimate as he is constantly healed up with every crit damage he lands. This regen also allows his weakness of being unable to gain healing from all heroes of the game negated. He essentially loses all of his weaknesses after lvl 141.

► lvl 141+ vs Wrizz: At this point, Thane is pretty much immortal due to Wrizz damage output being too low to kill Thane outside his ultimate. Wrizz’ ultimate when it hits Thane but doesn’t kill him also restores Thane’s energy to full, allowing Thane to quickly recover whatever health he lost. With 2 Invulnerability skills, a Shield, Health Regen and Faction Advantage, Thane is one of the best heroes to play against Wrizz, being the top 3 highest dmg in mid game and top 1 in the late game.

► lvl 141+ vs Soren: Once again, Thane is immortal against Soren as well even with the faction disadvantage due to the same reasons why he is immortal against Wrizz but also because of how good he is against Soren’s slow damage output and Charm skill. Thane’s Ultimate and Skill 3 are both able to dodge Soren’s Charm and Ultimate, both powerful skills that are often lethal or hindering to most heroes. But Thane can just completely dodge those skills while at the same time dealing high damage. Additionally, since Soren’s Ultimate hits 4x and applies a poison, Thane is often able to fully regain energy on the 2nd Hit of Soren’s Ultimate, thus Thane will then cast his Ultimate, negating the next 2 hits and the poison damage completely. This negates majority of what makes Soren lethal. Additionally, Thane’s skill 2 – Lunge grants Thane amall shield, granting Thane the ability to block 1 Soren charm and continue dealing damage when most other Survivalists cant. And while Thane is dealing damage, Thane can land more crits and be invulnerable once again from the next charm.
Depsite being at a faction disadvantage, Soren will never kill a lvl 141+ Thane. All these makes Thane the best vs Soren hero in the late game.