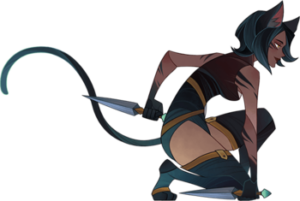 Kaz – Hand of the Wood

A matching pair of obsidian daggers, bringing eternal rest to many foes.

At the beginning of the battle Kaz raises her Dodge by 100 points and Crit Rating by 40 points. The increased attributes will gradually decrease over 20 seconds until they return to normal.