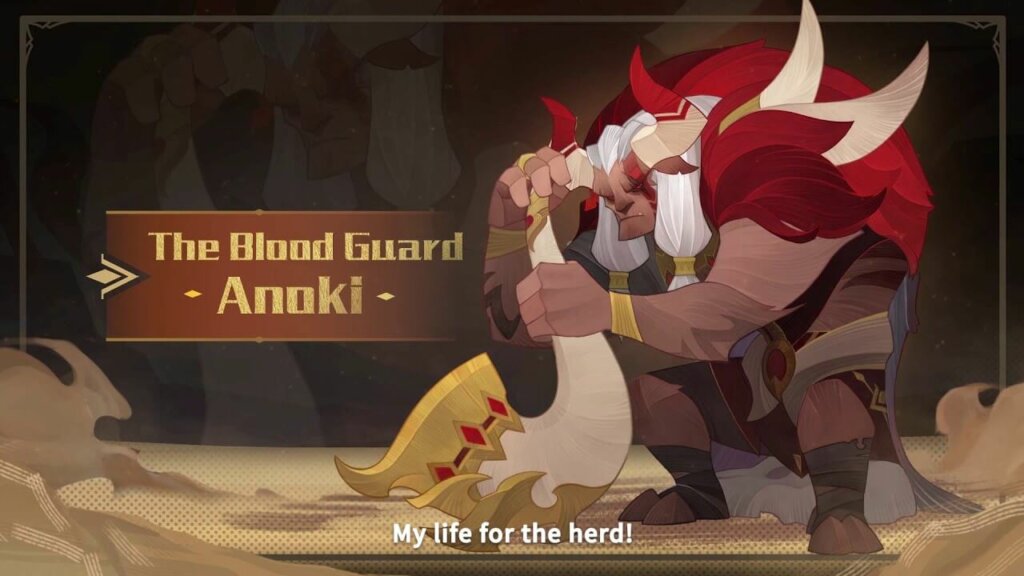 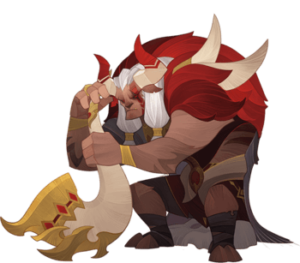 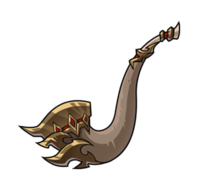 Hefty and colossal, this horn of war has been left scarred by the many battles it was used in. Once again its call shall be heard, ushering in a new era of war.

Anoki grew up with his father, an aloof character offering few words to anyone, and fewer still to his son. His father was a warrior, renowned among their tribe and holding the respect of the Mauler’s Grand Chieftain. He rose through the ranks and became the commander of the Grand Chieftain’s hand-picked elite, known as the Blood Guard. Anoki was resigned to being the son of a great hero, a shadow in his father’s burning glory. His father’s training regimes could have been mistaken for torture, but Anoki had no choice but to take the path laid out before him. The ultimate purpose was for Anoki to one day defeat his father, for only in this way could a calf become a bull. Anoki strove to live up to the task at hand. He wished to be a Blood Guard, to be the youngest ever to be taken into the ranks. He imagined the honor, the awe they would feel when looking upon him. His chance to prove himself, however, was taken away. On an outing with the Grand Chieftain, a flurry of assassin’s arrows struck down a handful of the Blood Guard. Knowing that these had been intended for the Chieftain, the remaining Guard, along with the Chieftain, gave chase to the small group of attackers. They were led straight into an ambush and severely outnumbered. Anoki’s father gave him the last surviving mount and commanded he break free of the encircling enemies to call for more support. When he returned, most of the assailants had been slaughtered and his father stood strong, but the grand chieftain was wounded and teetering on the brink of death. When news of the Grand Chieftain’s death reached the tribes, chaos followed. Some factions broke old truces while other looked to settle old scores. Others broke away entirely, going to forge their own destinies. Anoki’s father was met with much criticism. The great warrior, the proud Blood Guard commander, had failed at his task of protecting his chieftain. Many of his father’s warriors could not bear the dishonor and one by one left his side. The in-fighting amongst the mauler tribes further deepened the guilt Anoki’s father had to bear. The burden of his failure wore on his mind. A wound that wouldn’t heal, the guilt set in like a disease, wrapping itself around his heart. “”I’d rather have died on the battlefield, than like this…”” were his father’s parting words to Anoki, as he gifted his storied war horn to his son. The war horn had been awarded to he himself upon reaching his highest position, a symbol of all he had done for the tribes. Handing over the war horn to Anoki meant that all the expectations now hung over his head, a sword bearing heavily down with the weight of history. After his father’s death, Anoki worked to reunite the disbanded Blood Guard while also working to investigate the assassination of the grand chieftain. On his travels through the Scorched Expanse he came across a tribe of falcons. Getting to know one of the falcons, he learned that the assassination was not as simple as it seemed. After many years and myriad trials, Anoki regained the respect of his father’s old Blood Guard. Once again they would pledge their allegiance to the Grand Chieftain.

“Shoulder the burden and climb to the peak!”