Everything you want to know about Merlin – Seer of Destiny, the second non-limited Dimensional Hero in AFK Arena! 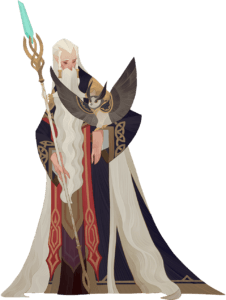 Players can test play Merlin or purchase him for half price. Once the half-price limited-time offer has ended, Merlin can still be purchased for his original price by navigating to “Merchants – Merchant Ship -Dimensional Deals”.

Added a new event that allows players to exchange Merlin. Players will not be able to exchange this hero immediately but shall be able to collect the corresponding tokens beforehand. Once this limited-time exchange event has concluded, players that do not possess Merlin can still acquire him at the Challenger Store by exchanging his Soulstones. Please view the in-game rules for specifics.

Merlin foresees impending danger, allowing him to reduce the damage received by himself and all allies by 25% for 8 seconds.

While Merlin’s premonition is still occurring, if an enemy that is symmetrically positioned uses their Ultimate ability, all allied heroes will receive a runic shield that has a value equal to 180% of their own max health, which exists for 5 seconds.

While the shield exists it prevents enemy control effects and cannot be dispelled. If a premonition is still in effect when Merlin uses his Ultimate ability again, the duration of this ability shall be reset.

Merlin calls upon the forces of magic to heal himself and his most injured ally for 4.5% of max health per second over 8 seconds.

30% of the damage dealt to this injured ally during the healing period is borne by Merlin.

When Merlin is suffering from the effects of an enemy control ability, he dispels the majority of the negative effects currently affecting him and lets loose his Spirit Owl, who proceeds to imprison the source of the effect for 3 seconds, causing them to lose health equal to a 150% of Merlin’s Attack Rating every second.

When Merlin suffers fatal damage for the first time he enters a spirit form and seeks refuge in his Spirit Owl.

While in spirit form, Merlin protects his most injured ally, during which time both Merlin and the ally recover a certain 10% of max health per second over 7 seconds.

When Merlin stops protecting his ally, he reappears in his original position.

If the allied target dies while Merlin is protecting them, Merlin will prematurely reappear in his original position. This ability may only be used when there are surviving allies still on the battlefield.

While the ability “Magical Amelioration” is in effect, 10% of the damage dealt by the protected allied target is converted, into health for both Merlin and the allied target.

[+10 Unlocks] 20% of the damage dealt by the protected allied target is converted into health for both Merlin and the allied target.

[+20 Unlocks] 30% of the damage dealt by the protected allied target is converted into health for both Merlin and the allied target.

[+30 Unlocks] The amount of health Merlin loses as a result of bearing damage for his ally when using the ability “Magical Amelioration” is reduced by half, and the ability now targets 2 allies.

3/3: The duration of the ability “Destiny Foreseen” is extended by 50%.

9/9: Merlin can immediately use the ability “Destiny Foreseen” when he enters the battlefields.