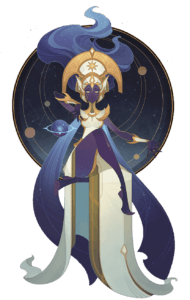 At the start of the battle, Morael creates a Star Core which remains on the battlefield.

When Morael uses her Ultimate ability, a Cosmic Field is generated for 6 seconds by the Star Core, which traps any nearby enemies.

Morael commands her Star Core to move to the most densely concentrated area of enemies, which deals 60% damage to any enemies that are in its way.

During the battle, the Star Core gathers cosmic energy over time from the galaxy.

Once the Star Core has finished gathering energy, it respectively transfers 120 Energy points to Morael and all allies close to it, which consequently exhausts all of the Star Core’s energy.

The Star Core is able to gather 10% of its total energy capacity per second.

Morael charges her Star Core with cosmic power, causing it to explode, dealing 240% damage to nearby enemies.

During battles, each time an enemy hero near the Star Core loses 1% health, the Star Core gathers an extra 0.4% of its total energy capacity.

[+10 Unlocks] When the Star Core is transferring Energy to Morael and her allies, it will also raise their Attack Ratings by 20% for 5 seconds.

[+20 Unlocks] When the Star Core is transferring Energy to Morael and her allies, it will also raise their Haste by 30 points for 5 seconds.

[+30 Unlocks] During battles, each time an enemy hero near the Star Core loses 1% health, the Star Core gathers an extra 0.6% of its total energy capacity.

3/3 furniture ability: If an enemy walks into the Star Core’s s Cosmic Field after it has already been created by Morael’s Ultimate ability, they shall also become trapped. If an enemy leaves the Cosmic Field and is later trapped by it again, the damage dealt this time is reduced by 20%.

9/9 furniture ability: While the Cosmic Field exists, all enemies on the battlefield are pulled towards the Star Core at a certain speed due to its gravitational force.