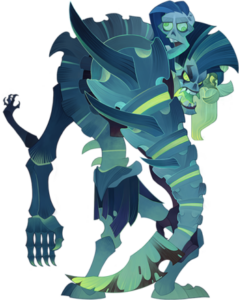 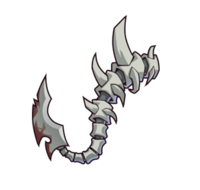 A deadly blade that slices through flesh like a hot knife through butter.

Norwich, Tome, and Porter had come to Rustport trailing a slew of debts and crimes. Their pursuers would not be kind if they were caught, but if there was anywhere that the trio could blend in, it was here. Moreover, the ships that left daily were always in need of more hands and never asked questions. The three were accustomed to harsh conditions and dubious work, and it wasn’t long before they started picking up jobs. The coin never lasted long, however, as there was always another drink to be had, another game of dice to be played, or some other carousing to join. The three made for a usual-looking partnership. Tome, tall and broad with a barrel chest, and Horwich, with his slight frame and darting eyes, would dance clumsy jigs around the deck or in a tavern while the usually taciturn Porter encouraged the pair In their revelries by piping out a jaunty tune. The three pirates were often down on their luck, so when they happened across their captain’s log with information about a buried bounty they made off on their own at the first opportunity. The trio seldom got along for more than a few hours at a time, but each bequeathed the others grudging respect. Old Porter’s rough wisdom, Torne’s impressive brawn, and Norwich’s slippery cunning made for a versatile crew between just the three. In a stolen rowboat, in the dead of night, they made their way to the location described in the captain’s notes. The only sounds were the lapping of waves as their cloth-wrapped paddles dipped soundlessly into the water. Sophisticated series of hand signals replaced speech as they approached a cavern yawning out of the surf. Making their way through the darkness of the cave, they reached dry land and pressed on, now far enough from the mouth to light their torches. Before long they found what they sought. In the back of the cavern was a rotting chest circled with heavy rusted chains. Smashing through the soggy oak, they were greeted with the sound of coins spilling onto the cave floor. The torchlight was reflected in a glittering pile of gold. Before they had the chance to even begin splitting the bounty, something caught their eyes. A crown! I’ll take that and you two can have more of the coinage.” Norwich rasped. “Not so fast, boy.” Porter puffed out his chest and stood straight. “We’d not have made it here without me.” the three were squabbling over the crown when glowing script began to shimmer into shape upon its surface. It read: “Eternal life, with a heavy price. Become what you hate, and never die” Horwich answered immediately. “Well I’ll have an eternity to come to terms with that, and it’ll take forever to spend this loot anyway!” He yanked the crown away and placed it quickly on his head. The torches were snuffed out with a hush. Total darkness enveloped the adventurers. The atmosphere suddenly became so oppressive it seemed to eat sound. After a moment of confused wandering, they realized they were lost in the black. A century later, a hulking shape emerged from the cavern. Massive and covered in twitching limbs, it shielded its milky eyes against the glaring moonlight. The three had merged into one. After a century of cursed and sightless wandering, the thing they hated most was one another. The promises of the crown had been kept.