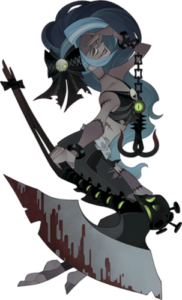 Cruel and graceless. Crafted for butchery and slaughter.