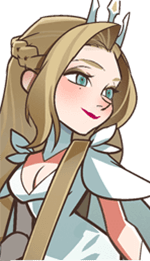 
This guide is shared by GloriouS. Make sure you check out their Discord Channel for more interesting stuffs!

Belinda is a ranged DPS with high burst potential gated by her naturally low energy generation.

► Due to Belinda’s 3rd skill (Brilliance), she has the 2nd highest Crit Rating in the game. This makes the Dura’s Eye Artifact especially potent on her. The attack speed buff from Dura’s Eye also increases Belinda’s energy generation.

► Belinda is one of the best heroes to use with Raine due to the amount of damage her ultimate does in such a short time frame.

► Double Ult: Use with Dura’s Call [Energy] to give her enough energy to use her ultimate right before Wrizz uses his “Bombs Away” attack (the massive AoE), which will fill her energy bar again from the damage dealt, allowing her to use her ultimate twice in quick succession.

► Offensive Support for DPS: +15% Atk and Crit Buff to 1-2 allies. However, because this buff is on a basic skill, she does not always buff allies when they activate their ultimate ability so she is best suited for DPS teams over Double Ult teams.

► With faction disadvantage, can suffer against Soren.