Everything you want to know about Pippa – The Muddled Magician in AFK Arena! 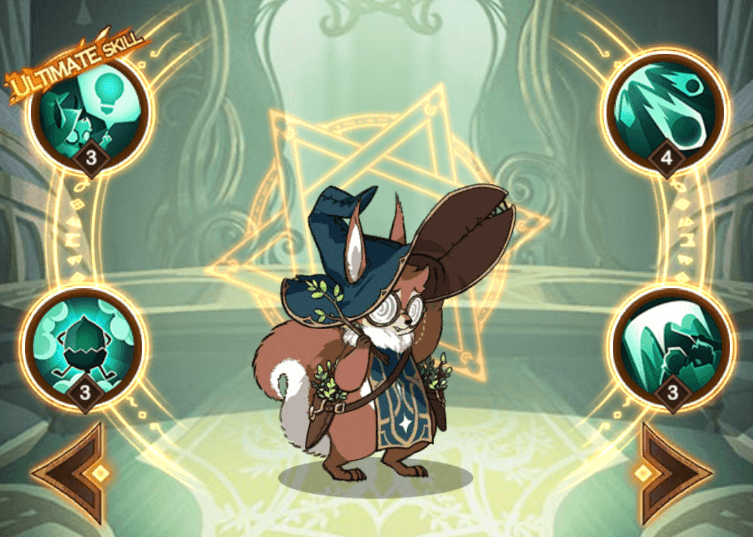 Pippa randomly imitates the base effects of either Nemora‘s, Arden‘s, or Tasi‘s Ultimate ability, which will not require continuous casting. If any of the aforementioned heroes are in the same formation as Pippa, she shall prioritize imitating that hero’s ultimate ability above the others’.

Pippa continuously fires one magic orb every 0.15 seconds, with each orb dealing 90% damage to its target. After firing 4 magic orbs, every subsequent orb fired increases Pippa’s chance of spell failure by 8%. If Pippa fails to fire an orb, she is temporarily stunned and the ability will cease.

Lv.2: Pippa has a 25% chance to fire a yellow magic orb that deals damage and simultaneously reduces its target’s Energy points by 70.

Lv.3: Pippa has a 25% chance to fire a blue magic orb that deals damage and simultaneously reduces its target’s Haste by 60 points for 4 seconds.

Lv.4: Pippa has a 25% chance to fire a green magic orb that deals damage to its target, of which 100% of the damage is converted into Pippa’s health.

Pippa teleports the closest enemy target onto the head of the next closest enemy, dealing 290% AoE damage and causing any enemies within range to become stunned for 3 seconds. Pippa has a 90% chance of cast failure on the first cast. If Pippa fails, her closest frontline ally is teleported on to the top of the farthest enemy target’s head, but her ally shall not be injured or stunned.

Lv.2: Pippa cannot fail to cast this ability when she is positioned at the center of the backline.

Lv.3: Any enemies within range are stunned for 4 seconds.

Pippa deals 270% damage to the enemy with the highest Attack Rating, simultaneously transforming them into an ‘Acorn ‘ which is incapable of attacking for 5 seconds. Pippa has a 25% chance of failing to correctly cast this spell. If Pippa fails, the spell’s effects shall be cast upon herself.

Lv.2: Pippa gains 100 Dodge points while she is in a transformed state.

Lv.3: Pippa gains 200 Dodge points while she is in a transformed state.

Every time Pippa fires a magic orb, she has a 40% chance to fire an additional magic orb at a different random enemy target while using the ability “Pippa’s Pandemonium”.

[+10 Unlocks] Every magic orb fired using “Pippa’s Pandemonium” has a 65°0 chance to produce an additional orb that targets a different random enemy target.

[+20 Unlocks] Pippa’s teleported ally is immune to all damage for 5 seconds after being teleported by the ability “Astral Shift”.

[+30 Unlocks] After using the ability “Transmogrification” a total of 2 times, Pippa will no longer fail to cast this spell, and it will now target the two enemies with the highest Attack Ratings.

Pippa continues to imitate the Ultimate ability which she imitated for the first time throughout the battle, simultaneously improving its effects.

Pippa gains 80 Energy points every time another hero uses their Ultimate ability, and her Attack Rating is also permanently increased by 10% each time. Permanent Attack Rating increase may be stacked up to 12 times.