In this guide, we are going to give you the best advice on building your own PvP teams for different stages of AFK Arena.

At this point, PVP should NEVER be your focus. You should naturally push PVE and have PVP grow as a response.

Do not build heroes only for PVP unless you’re a high-end spender looking to compete at the highest level on your server.

For general team camps, you should always include your carry within your arena team for attack and defense, levels are the single most important thing in early game PvP, when developing an early game PvP team, build around your carry.

Eironn? Try to include

Focus on synergies over ascensions unless the ascensions ALSO include a Level. difference.

And within this basic core, aim for 1-2 heroes who provide Crowd Control skills to the enemies.

Belinda team super early on would be:

There isn’t a ton of CC here but Rowan, Rosaline, and Belinda all have stuns which are impactfuL enough.

Geared more towards the later phases of early PvP, a

This phase of PvP will mostly be dominated by levels so don’t get down if you can’t win tough fights.

Most of this region of PvP is dominated by two heroes,

This is where early and mid-game investments will shine!

A good Eironn comp is near unbeatable at this phase in the game except for raw levels or an even better Ainz camp.

When attempting to counter this team, disrupt Eironn, primarily either through

When attempting to counter this team, try to Lorsan Link the enemy Ainz and use Gywneth or high levels of burst to kill Ainz.

There is currently no strong way to counter these teams besides a better one of your own for mid-game PvP.

However, my suggestion for those with lesser-built carries is to try and stick to the formula of 1 DPS, 3 Support, 1 Tank.

Note that in the meta teams, supports usually also perform the role of tanks.

This is where players tend to actually focus on PvP.

These teams are usually extensions of strong PvE teams, however some may pivot more into PvP for the Legend’s Championship.

The teams start to move up in power level towards budget top PvP options, usuaLLy Looking Like one of these three sets:

When countering this formation use strong damage resistant heroes Like Thoran or Talene, or interrupt Eironn and Gwyneth with early disruption such as Athalia, Nara, or Nakoruru.

When countering this comp, use high burst heroes like Gwyneth paired with a Lorsan link on Ainz to try and immediately shut down the DPS.

When countering this team, mirror the formation but remove Talene for Saurus or use Burst, and DPS the non Talene side.

Challenger’s Arena is basic 3v3 PvP, the goal is to beat two of three teams.

I will go over formation shells in a bit, but I suggest each player as a baseline makes 2 evenly powered teams, and as they progress they can evolve these teams into a solid 3, when attacking, put your strongest against their second strongest, and your second team into their weakest.

If a player puts all their resources into one team, you can simply ignore it.

Help per lineup is on an individual basis, so push this arena every day, and learn your matchups for what counters your specific opponents.

There’s no punishment for losing in challengers.

This is the pinnacle of PvP, the top players in each region battling it out, it’s how many know of masterful players Like Syphon, Fishstix, Nice Face, Hashimaru, YooDumFuk, etc.

The secret to this mode is that it’s locked behind a sturdy paywall to fight for the top, needing high-level top tier heroes, Elder Tree, Signature Items, and Furniture investment.

Still, there are many concepts players can take away as well as meta snapshots for what’s on top of the meta.

First of all, i’ll explain the basic PvP Rock Paper Scissors for Legend Championship. The core principle is:

This formatting applies to most variants of these teams, however, there are a few exceptions, especially with the addition of the new dimensional team.

Alna within energy cycle teams tends to beat burst, so you have to then use a dimensional team to beat it or force burst to remove resources.

This is the most complex part of PvP to grasp, and only a splash of the real thing.

Here is a snapshot of the meta teams as of patch 1.54, aka Alna patch. There will be some changes likely in patch 1.55 with Athalia’s rework as a potential Ainz counter. 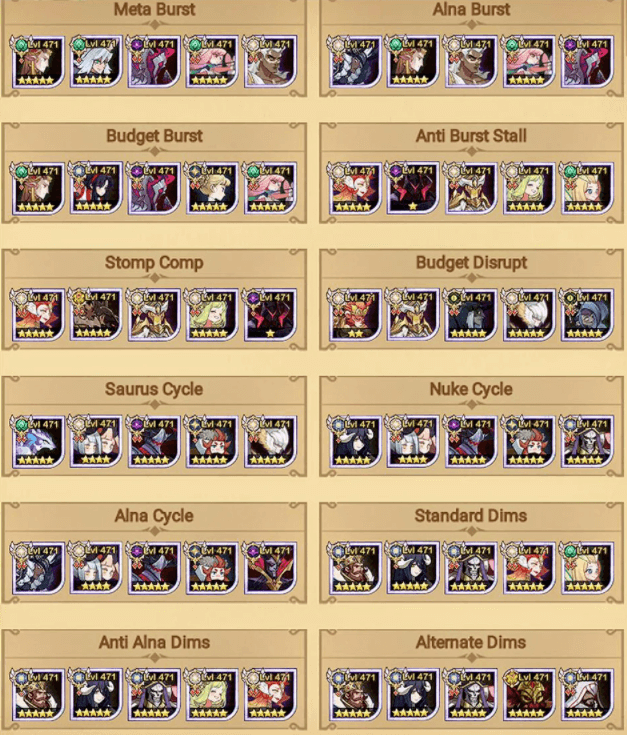 This is what makes up a PvP team, similar to how PvE has .et shells for heroes, as does PvP.

Usually, the shell is a required part of a team, but in some cases, I’ll give budget examples and explain how to round out a team.

These are our key to success in PvP as a whole, including Heroes of Esperia.

This team revolves around the core of

Zolrath, but for many budget players, you’ll instead exclude Zolrath for other common parts of the team.

The goal is to quickly burst down enemies before they have a chance to interact.

You can even turn this team into a Safiya Eironn or 5 Pull Eironn Skriath team.

This team is focused around cycling through ultimate abilities through high rates of energy gain, the core consists of

Oden does moderate as well.

The goal is to not let your opponent ultimate frequently if at all.

Other common additions may include

Some budget DPS like Ferael may also see success.

This team is focused on sustaining and tanking through any burst and winning through higher health bars.

The core generally consists of

Mezoth, however Mezoth can be substituted by another tank such as

The rest of the team is usually rounded out by anti-burst options, such as

Ainz is broken, and this team is simply meant to utilize his nature to force through the opposition!

The core here would be

If you do not have Albedo, Ainz is best meant for the energy cycle.

The rest of the team can be lied out with a multitude of heroes, including all other

This is an older team but still very effective regarding PvP!

The basis of the team is to use

Daimon, or any other forms of disruption.

A bit more niche, this team revolves around the innate mauler synergies, this could just be considered a full mauler comp at its peak.

This core revolves around

Numisu, but any Mauler can fit into this team besides Warek and Khasos, with a special mention to

Kelthur may fit as well.

Although the hero is fantastic in PvE, in PvP Izold tends to struggle a bit.

However, that does not mean he doesn’t work and is a solid attacking option for budget players.

His pairings usually include

This will likely be one of your weaker teams so play around that. Daimon can also fill Izold’s Role.

Nearly a mirror to the common PvE Gwyn comp teams, this team attempts to mirror the exact same concept.

With the core of

Arthur along with common substitutions including

There are other team formations that can function well in PvP!

These are just some of the example cores to help players within their many levels of PvP.

Obviously, the PvP scape is always evolving with new heroes so within say 6 months, parts of this guide may be outdated. The core concepts though still remain.

If you have no idea how to build a PvP team, follow the formulas for each portion of the game.

When should I focus on PvP?

I wouldn’t have PvP as your primary focus until later chapters such as 34+.

Until that point you want as much PvE investment as possible until levels are your primary limiting factor.

The PvP meta is constantly changing. Make sure you check out our tier list to keep being updated!

Just simply keep it to a standard PvE elder tree!