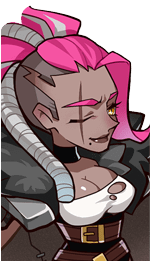 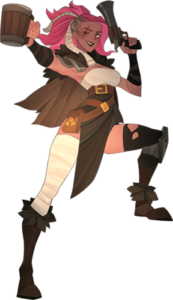 A crossbow, accurate and light. Perfect for a skulking kill or cunning ambush.

Raine is a niche support whose specialty is amplifying the damage of her allies and snowballing one kill into a victory through massive energy regeneration.

Raine is not strictly a Sweeper herself, but rather, her ultimate can turn an ally with a highly damaging ultimate into a Sweeper. As such, both Raine and said ally need to be protected for their Sweeper qualities to manifest.

► Raine’s ultimate is best used alongside a hero who has an ultimate which can secure quick kills, as that hero can consecutively cast their ultimate after each kill. A prime example of this would be Belinda’s ultimate, which has unlimited range and massive burst damage.

► Known for her ability to turn heroes into SS tier depending on the situation.

While Raine herself deals low damage, she applies a debuff on the Boss that causes them to take 15/20% Physical and Magical damage. But what makes this significant is how this debuff is tied to her ultimate ability. This means Raine will always cast her defense reduction at the same time as her allies’ ultimate abilities. This makes her a powerful ally for allies who deal high Ultimate Damage.

When Raine is played with a lvl 121+ Estrilda, Raine is guaranteed to cast her ultimate ability at the same time as the Double Ult Damage Dealer(s). This makes her straight up the best Defense Reduction Support for Double Ult compositions as Raine-Estrilda is always guaranteed to amplify the damage of the first and 2nd ultimate ability, increasing your team’s damage output very significantly