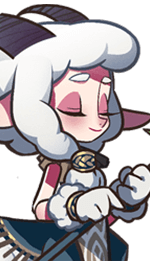 A sharp spear that can cast natural magic. Ideal for any defender of the forest.

Normal attacks heal Nemora’s weakest ally for 60% of her own attack rating.