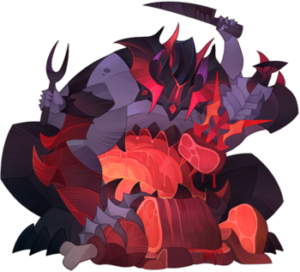 Mezoth cannot be controlled whenever his health is higher than 50%, and the duration for the majority of debuffs affecting him is reduced by 50%. When actively using his Ultimate ability, Mezoth imprisons an enemy up until his energy is completely exhausted. During the imprisonment period, Mezoth loses 70 Energy points per second and the imprisoned enemy loses health equal to 70% of Mezoth’s Attack Rating every second and cannot attack or use any abilities (enemies cannot die as a result of this damage). If affected by an enemy control ability, Mezoth will lose an additional 70 Energy points per 0 .5 seconds. If the enemy target is immune to control abilities, they will not be imprisoned and shall be immediately dealt 480% damage instead. Allied heroes shall prioritize their attacks against enemies that are not imprisoned.

Mezoth attempts to knock down an enemy. If Mezoth successfully knocks down an enemy, he proceeds to strike them multiple times, dealing 70% damage per strike, with the final strike dealing 220% damage to the enemy. Every time Mezoth lands a strike on the enemy, he will recover a proportion of health equal to 8% of the health already lost by the enemy.

Lvl 3: If the enemy is slain by this ability, Mezoth recovers a proportion of health equal to 30% of the enemy’s max health.

Lvl 4: Damage is increased to 8

At the beginning of battles Mezoth’s max health value is increased by 80%, and the percentage of health that he begins the battle with remains unchanged. The increased value of Mezoth’s health will slowly diminish over 50 seconds, starting from the beginning of battles. The diminishing max health value does not affect the current percentage of Mezoth’s overall health.

Lvl 2: Mezoth’s Defense Rating can be increased by up to an additional 100%, based upon the current percentage of his max health. A higher health ratio results in a higher defense rating

Lvl 3: Mezoth’s Defense Rating can be increased by up to an additional 180%, based upon the current percentage of his max health. A higher health ratio results in a higher defense rating

Mezoth gains a shield for 7 seconds that is able to mitigate a damage value equal to 10% of his own max health. Mezoth hacks at enemies that are standing within a certain distance in front of himself, dealing damage equal to 20% of his own current health to them, also causing their Haste to be reduced by 50 points for 7 seconds. 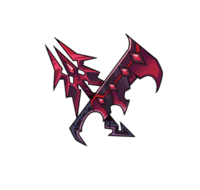 Two vicious tools used exclusively to butcher and maim victims that exist as symbol of Mezoth’s depravity. It is said many poor souls bear the scars of Mezoth’s wrath on their bodies.

Hero gains 200 energy points at the start of battles.