The goal of this guide is to help you reflect on how to build a team, instead of giving pre-ordered compositions.

The examples given are mainly here to illustrate the points explained in General knowledge.

Why are you often suggested to play Shemira with 3 Wilders? What is the main objective and how can you adapt to it? In short, is there any magical solution to go through the content of the game like a breeze?

Like most of the presently available guides for AFK Arena, this guide is purely subjective and therefore not necessarily the absolute reality. Its aim is to help you better understand the game’s mechanics. Up to you on whether to apply my suggestions… or not!

Building a team is based around one carry. This carry represents your main DPS for your team, and your main objective is to build your team around that carry.

Play only one main carry, otherwise, your team may lack inefficiency at a certain point.

You will see on the below examples that positions are quickly taken by supports or tanks that will allow your main carry to do his job, it is then complicated to play with two carries.

How to build around the main carry?

The most important thing is to see if your hero can be played as your main carry or not. Your main carry should be able to get rid of multiple enemies by himself if you give it a proper setup.

Once you have selected your main carry, begin analyzing their toolkit.

Ask yourself as many questions as possible in order to assess their strong and weak points so that you can build your team accordingly around it.

Examples: The Most Used Carries in AFK Arena

In order to put in use the above-mentioned theory in the guide, I will give you some examples on my way of thinking in how building teams that we often see around, thus being the most efficient ones. 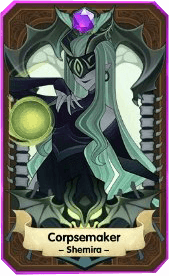 The most used main carry, suggested by everyone due to it being so easy to loot and her huge capability of 1v5

Her toolkit is particularly useful when Shemira is at a higher level than your other heroes, which allows her to carry your team by herself.

How to counter her Weaknesses

As a hero depending on her ultimate, Shemira needs a lot of time to activate it.

This is why Shemira is often seen along with Tasi and Nemora, who bring a huge life to sustain the team. Thanks to their crowd control skills and healings.

Arden as well is an interesting choice to play with Shemira, thanks to his triple root. Beware, though: His level being capped to 160, you have to be wise in his positioning in order to have him surviving as long as possible.

Lyca is often played alongside those heroes to bring some extra movement and attack speed and a bonus of energy at the beginning of the battle that allows your heroes to cast their crowd control spells before the enemies can cast theirs.

And lastly, Brutus is mainly played with this team. Thanks to his invulnerability that allows a short but efficient temporization on one side of the map.

You can think about it the other way around.

Instead of letting Shemira slowly, but surely, gain in energy, we could play supports that boosts your team’s energy so that Shemira can cast her ultimate as quickly as possible.

For that purpose, we are going to look into the Lightbearers, particularly towards Rowan and Rosaline.

Those two heroes provide healing and control spells to your team like Tasi and Nemora.

But what differentiates them from their wilder counterparts is that they have their support skills based on energy gain, most especially Rowan with his Signature Gear that is considered one of the most powerful of the game (enabling heroes to ult upon reaching 600 points of energy instead of 1000).

We can also add Lucius as the main tank, who is dependent on his ultimate skill as well for both his and the team’s survival.

The last hero in this team will vary depending on the enemies you will be facing. You could opt for a Fawkes or Nara for an extra crowd control skill, and Estrilda for an additional energy gain, or finally a Thoran, Hendrick or Grezhul if the enemy possesses burst damage.

Compared to the Wilder team, this composition demands much more heroes to adapt against the many different enemy teams, as well as Rowan’s Signature Gear level at level 20 minimum to work efficiently.

Hence the fact that this team is much tougher to put in place. 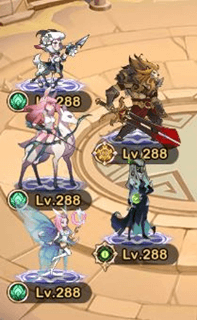 (Beware, Shemira is not protected when Thoran is being resurrected and thus can easily be killed)

Note: Celestials and Hypogeens are not taken into account in order to maximize the accessibility. 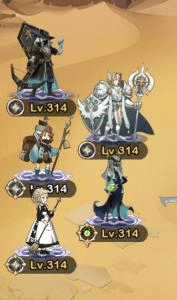 Comments for the Shemira Guide

Shemira is considered as the best character to carry your team until chapter 24 (which in general means that all your team has reached level 240).

Once you have reached this point, it becomes harder to play her at the front line, since she will hardly be able to tank enemies that are at a higher level than her, thus dramatically reducing her energy gain.

She will occasionally be played at this level, and other carries will be taking the priority, especially Ferael or even Eironn, that work perfectly well with the Wilder team composition. 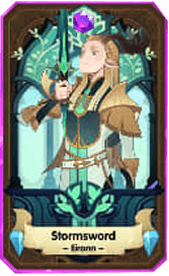 Strongest damage dealer amongst the Wilders

How to counter Eironn’s weaknesses

Lyca, Tasi and Nemora, as usual, bring a lot of sustainability to Eironn’s grab.

The movement speed gain that Lyca offers allows Eironn to have the initiative and to land the crowd control faster, whereas Nemora and Tasi do their usual work by providing healing and crowd control.

Adding to this, Ulmus and Seirus are good choices to be played in front of Eironn. Ulmus would indeed root the enemy in front of him that Eironn will be grabbing towards him when Seirus will land a bump on multiple enemies once they are grouped up.

Lyca’s Signature, especially when level 20 or above, brings a decent damage upgrade to Eironn who already has a high accuracy level.

As usual, Lyca can hardly be separated from her fellow acolytes Tasi and Nemora.

Eironn can also be played alongside Safiya, his grab brings the enemies in Safiya casted zone and offers an extra AoE damage, thus bringing in huge synergy to this team.

Playing Eironn and Safiya puts in the team two carries at the same time, thus being sometimes situational, but the synergy is pretty powerful and can be considered as an exception.

As for the tank, many choices are open. Brutus is mostly chosen thanks to his passive skill (the roar) which nullifies enemies’ dodge and allows Eironn to successfully land the majority of his hits. 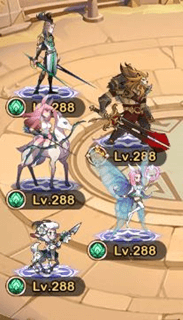 Eironn is quite greedy when it comes to set him up properly :

Eironn will mostly be used as a transition for the late game, having similarities with Shemira’s team composition since they are on the same basis. You can focus his Signature to level 30, being one of the most useful heroes.

In order to help you in your choice of carry, here is a list of heroes that can be used as main carry (we are not talking about viability here, it is up to you to define what is within your reach):

Think carefully about your choices for ascension to build teams as you wish.

As you understood, there are many possible and playable options on AFK Arena, depending on your looting luck and your choice of gameplay.

These examples were merely here to highlight different possible combinations and why it would be viable, but by now you probably understood that there is no real answer to “Is there a God Tier comp I can focus ?”.

We hope we grant you the keys to help you build your dream combo.

Thank you for reading this Guide till the end, don’t hesitate to contact us to interact about it!

Special thanks to all community supporters for these feedbacks and to Fealynn (ID : 1106434 / Discord Tag : Fealynn#6700)  for proofreading, correcting and adding details.