What is Arcane Labyrinth?

The Arcane Labyrinth is one of the most interesting game-mode in AFK Arena. Your goal here is to defeat the boss of each stage floor in order to get the rewards. There are 3 floors in total. The difficulty increases when players get to the next floor/stage.

While participating in this mode, players need to battle with the enemies to unlock helping Heroes, items (Labyrinth Relics), rewards and to progress further in the Labyrinth. 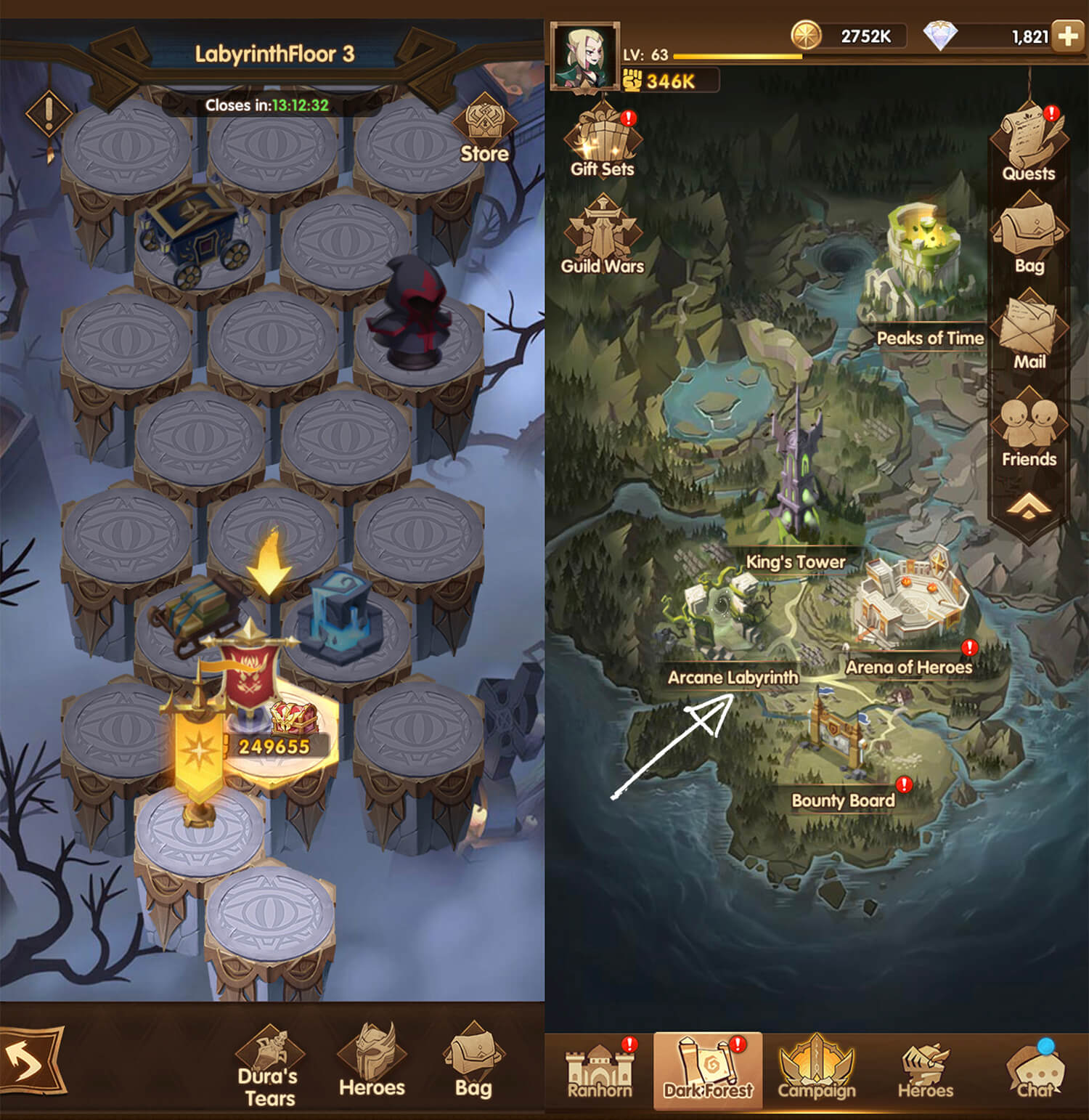 How is the difficulty of Arcane Labyrinth determined?

Basically, when you power up your Heroes, the difficulty of the Arcane Labyrinth also gets increased.

Here are some basic tips that could help you go a bit further If you are getting stuck in the Arcane Labyrinth:

Collecting some support Heroes at the beginning is a must If you don’t have too many Heroes in your bag. This helps you find the strong Heroes to build up the missing parts you are looking for.

If you assure that you have enough Heroes to cover you till the end of the journey, focus on defeating the Flags to get Relic buffs, which is a lot more crucial.

Remember to take the Relics that give buffs to the Heroes you own. Focus on taking Relics for your main carry/damage dealer, or the Factions that have 3+ Heroes in your team. They are the cores that help you get out of the Labyrinth.

The hardest time for most players to beat the Labyrinth is when you have a carry at level 160+ while the other Heroes are under level 141. The enemies’ power will be most likely based on your average power, which means most of your lower level Heroes will get eliminated pretty quickly. The difference between Heroes lvl. 160 vs lvl.141 is very huge.

Actually, defeating Arcane Labyrinth is not hard. It is only hard when you don’t know the proper ways to solve the maze.

Note: After the latest update, purchasing Mythic Gears in the Arcane Labyrinth is not always guaranteed. Instead, now you can also see Hero’s Essence, Enhancement Tokens, and other items.

What are the Labyrinth Relics?

After defeating every grid of enemies, you will be able to pick 1 from 3 relics showing on the screen.

There are different kinds of Relics with different properties. They boost your power based on their properties, helping you progress within the Labyrinth easier.

Once you picked the relics, they will be automatically equipped. You don’t have do to anything else to activate them.

All of the Relics will get removed once the Labyrinth is over.

To see all of the Relics in the game, check out the article Complete Labyrinth Relics List!

What is the Dura’s Tear?

Dura’s Tear is a special item which can only be used within the Arcane Labyrinth.

Once you activated this item, it will immediately revive all of the dead heroes in your team, as well as will give all of the alive Heroes to full HP/Energy.

The easiest way to earn Dura’s Tear is to complete the Weekly Quests.

If you are pretty sure that you can beat the current enemies with the dead Heroes in your team, don’t hesitate to use the Dura’s Tear to revive them.

Finishing the event to get the rewards is a lot more important than saving the Dura’s Tear for nothing.

What are the Rewards?

Players can receive so many rewards by defeating the enemies in Arcane Labyrinth, including Gold, Diamonds and especially the

Labyrinth Tokens, which can be used to purchase many items, including specific Heroes

To read more about the Stores in-game, check out the article Stores – The Complete Guide! 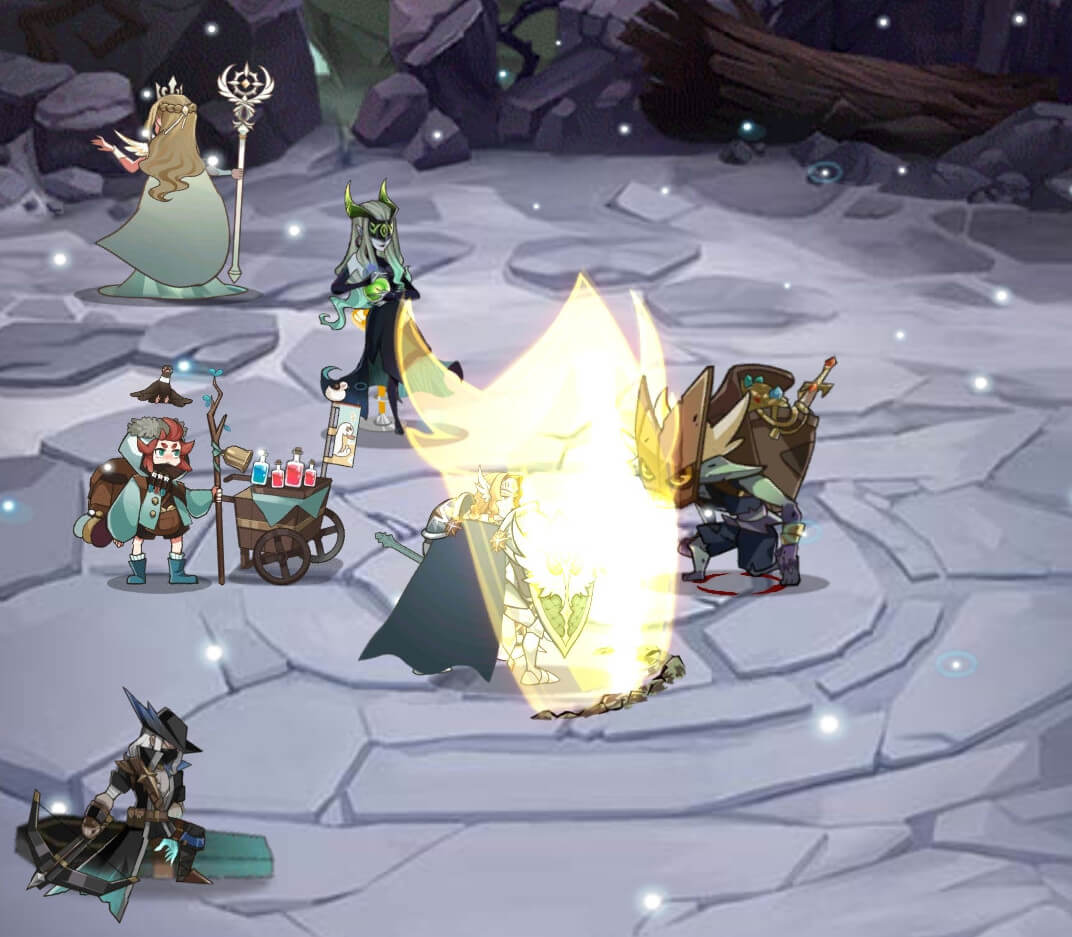 Advanced Guide: How to defeat Wrizz in Hard Mode?

A lot of players finding it hard to beat the Wrizz in Arcane Labyrinth Hard Mode so I’ve decided to write a small guide for this specific topic.

People usually skip the Wrizz because they do not want to lose out on rewards, because they think that their teams are not strong enough. This is such a huge mistake. Basically, you are always able to defeat the Wrizz regardless of your team power, and eventually defeat the entire Arcane Labyrinth. I have been fighting the Wrizz for 6-7 months now and haven’t lost to him any time. Just need to take the tips in this guide and you will be golden!

[…] mode is very similar to the Arcane Labyrinth mode as in Peaks of Time, you explore the map by unlocking to the grids next to you in order to […]