Here is the complete list of all Signature Items in AFK Arena!

What are Signature Items?

Once your heroes have reached the Mythic tier, you will be able to unlock their “Signature Items”. All Legendary Tier Heroes do not have signature items.

These special items will increase their stats as well as grant them some special abilities. Additionally, Signature Items also have their own Attributes [Dynamic]

Attributes [Dynamic] are calculated based on the hero’s base stats. The base stats are the original stats of the Hero while not having effects from any item/artifact/union.

Upgrading signature items increase their attributes as well as the buffs they offer.

How to Unlock Signature Items?

How to obtain Primordial Emblems?

How to upgrade Signature Items? 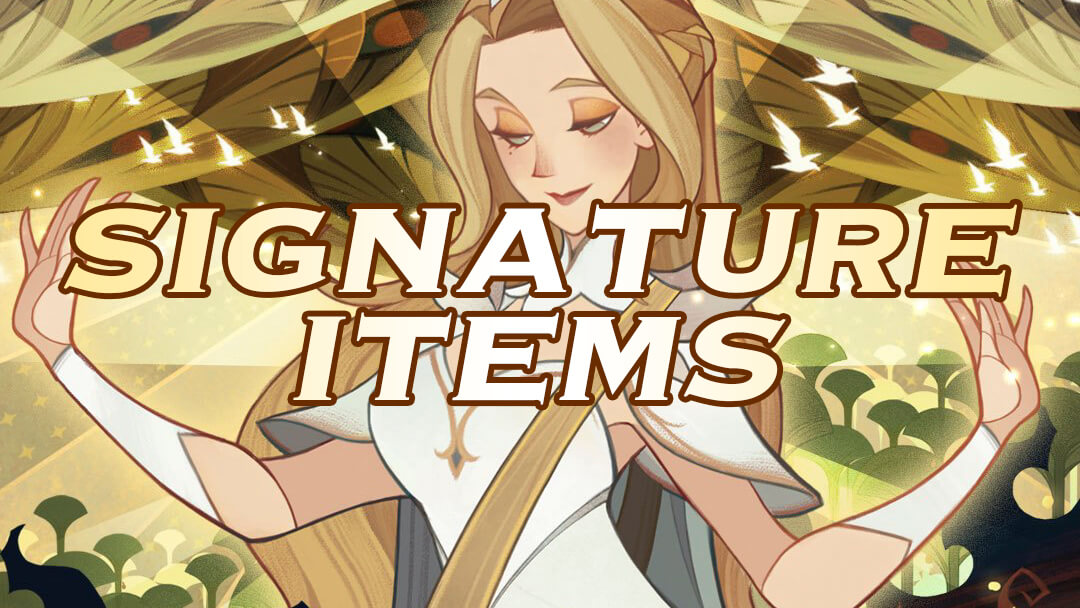 It is difficult to say which hero’s personal signature item should be upgraded first because you never know what heroes do you have from pulls, which one will go top tier first and which one you can get after 1 year of playing.

Personally I can make Tasi ascended Only at chapter 26. And at chap 27 still playing with Myth Lyca. So let’s imagine that you already have all of this 46 heroes Ascended. If you see high priority hero and you don’t have him at the moment, just look for the next one.

Overall priority based on late-game meta.

Phantom Force: For every time 4 phantoms disappear, the effect of the “Phantom Strike” initiates.

Upsurge: Brutus restores 10% of his max HP after using the Last Gasp.

Chill: Eironn’s Elemental Surge has the chance to makes enemies become frozen for 2s. Enemies that have attack speed reduced have the higher chance of getting frozen. Frozen enemies will not get knocked back.

Inspirit: While Estrilda is still alive, for every non-summoned ally that falls in combat:

Can be stacked up to 3 times.

Immolate: Any enemy that has lower than 30% of max HP will get stunned for a while.

Madness: When Fawkes’s Purification ability successfully removes the debuffs that prevent the allies from casting their ultimates, those allies will become immune to Crowd Control skills, their defence will also be increased by 8% for a while.

Reanimation: While he is still alive, summons 1 skeleton every 9 seconds behind the enemy team.

Nature’s Shield: Efficacy of all shields + 15%

Steadfast: Hendrik’s HP is increased by 300% of [attack rating]. The initial HP available will not get increased.

Isabella: Tome of the Dead

Elude: Every time Kaz takes damage, Dodge +13 pts. Can be stacked up to 12 times.
When Kaz successfully doges an attack, stacks of accumulated dodges – 3.

Blood Sap: Any non-summoned ally, who is within 20 levels of his level, is defeated, his attack rating + 20%.

Divine Purge: Triggered when Lucius deals a critical strike with a normal attack, or when they are struck by the Divine Strike, causing Enemies’ energy recovery rate reduced by 30% for 4s.

Vision of the Stars: While Lyca being alive, all teammates accuracy increased by 40.

Looming Death: When the enemy can be slain by her ultimate, she will try to use “Impale” to bring them closer first before finishing them off using the ultimate ability.

Nature’s Touch: Nemora uses normal attacks to heal the weakest teammate for 60% of the attack rating.

Helping Hand: Ally with the highest ATK points is able to recover up to 30% of the HP/Energy Raine recovers, as long as Rainer is alive.

Thirsty Work: Rowan sets up a stall that includes an Energy potion. Any ally has more than 600 Energy can drink a potion, replenishing 60 energy points. Every time the stall is set up, the energy potion gets replenished.

Arcane Power: 1% of Safiya’s total damage output gets converted into attack rating. Attack rating can be increased up to 140%.

Beast Rider: Beast of Burden now no longer drains Energy during the first 5s after being used.

Diminish: After Tasi uses the Teleportation, attack rating of nearby enemies reduced by 10%.

Focused Finesse: If Thane doesn’t receive any damage for 3s, increase his damage by 20%.

King’s Will: Enemies cannot take down Throne during the focusing phase of “Retaliation”.

Brawler’s Resistance: Recovers 3% of max HP per sec for 15s when his Carnal Rage ability cannot stack any further.

Thank you a lot man!

Very useful info, thank you. By the way, the tier list has Nara’s name but with a picture of Kaz.

Wow thank you a lot! I will update it right now!