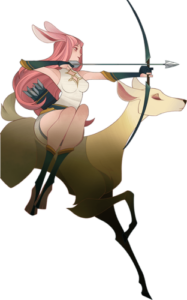 A gift that fell from the sky. Rains destruction in the same way.

Skill: Vision of the Stars

Increases all allies’ accuracy by 40 while Lyca is alive.

Lyca gives her allies the upper hand at the beginning of battle, but in exchange her performance suffers in longer battles.