Greetings Adventurer, below is a list of the AFK Arena v1.50 update’s contents!

4. Added the adventure “Fields Of Stone” to the Trials of God feature. Players can unlock this adventure by completing Stage 28-60 of the campaign and by completing 100% of the same adventure found within the Wandering Balloon.

5. Added a new Warrior Class-Exclusive Artifact called ‘Chaos Bringer’, which can be acquired from the Trials of God – Fields Of Stone instance. 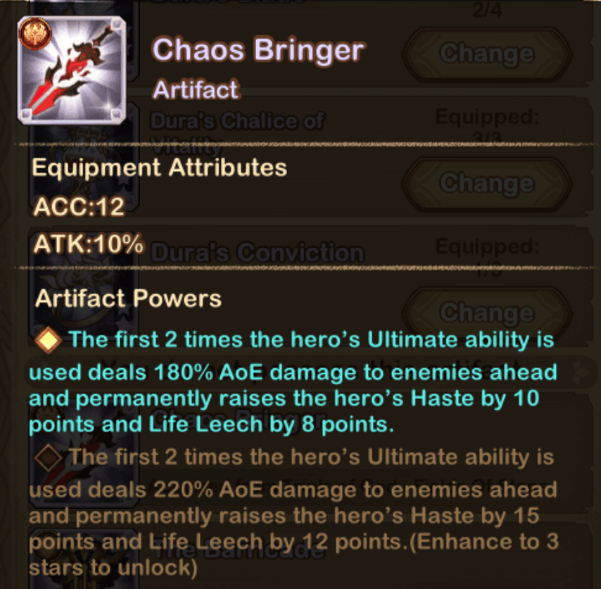 7. Reduced the stage difficulty of stages in Chapters 31 through to 37 in order to make the stage progression smoother.

8. Added new achievements to the Achievement feature as well as the corresponding stickers and badges.

10. Added a new Celestial / Hypogean Hero Replacement feature to the Rickety Cart. Once a player possesses a five star ‘Ascended‘ tier Celestial or Hypogean hero, they can replace a certain number of duplicate Hypogean / Celestial heroes with any non-Dimensional hero of their choice.

11. Optimized the visuals of the ‘Events’ page.

Khasos – The Unruly – Adjusted the effects of the Exclusive Furniture Ability “Almighty Warrior”, for specifics please visit this page.

Grezhul – The Corrupted – Adjusted the effects of the Exclusive Furniture Ability “Shadow Strike”, for specifics please visit this page.

Thoran – The Fallen King – Adjusted the effects of the Exclusive Furniture Ability “Deadly Attraction”, for specifics please visit this page.

Talene – The Rising Phoenix. – Adjusted the effects of the Exclusive Furniture Ability “Burning Sun”, for specifics please visit this page.

Elijah & Lailah – Celestial Twins – Fixed an issue that was causing the skin “Tango D’Anima” to be displayed incorrectly within the Guild Hunting game mode.

Zaphrael – The Righteous – Fixed an issue that was preventing the damage caused by “Thunderstorm” from triggering the effects of “Static Charge” after Zaphrael was defeated.

Lucretia – The Betrayed – Fixed a problem that was causing the ability ” Deathwish” to target allied heroes while Lucretia was entranced.

Raine – Death’s Denier – Fixed a problem that would sometimes cause invulnerable targets to suffer damage from Raine’s “Barrage” ability.

Kelthur – Plaguegrip – Fixed a problem that was causing the effects of the ability “Ethereal Resurgence” to be erroneous.

Ezio – Auditore da Firenze – Fixed an issue that was stopping the ability ” Eagle Vision” from making the screen fade to black for some time when it was used against enemy bosses.