The upcoming AFK Arena Midwinter Feastivities are finally here! Let’s defeat the Ice Shemira, participate in the Midwinter Feast and get yourself a ton of rewards as well as a Hero chosen by yourself! 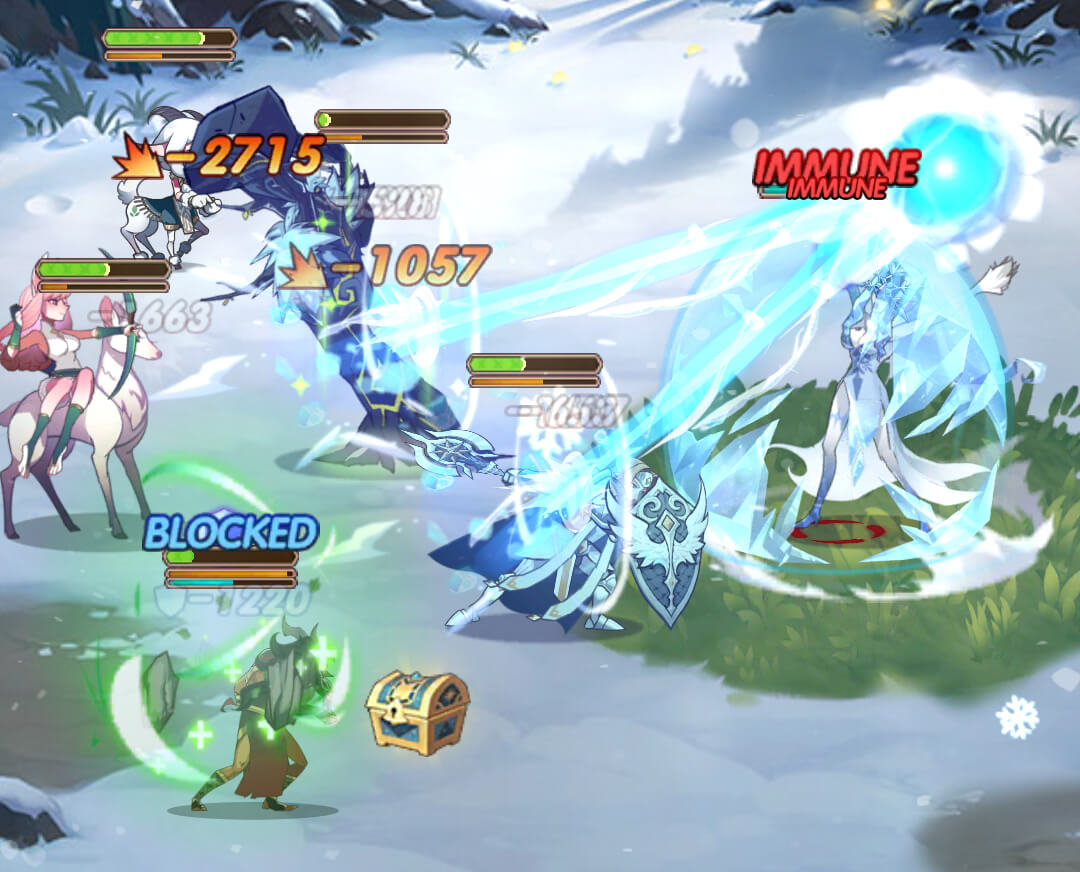 Defeat the Ice Shemira and earn the rewards!

Blizzard: Shemira summons snowfall 10 seconds into the battle which falls heavier every 20 seconds. While there is light snowfall, all of her enemies will be unable to recover any health. While there is heavy snowfall, her enemies will also be dealt periodic damage. Each time Shemira summons snowfall or increases the severity of the snowfall she will receive a layer of frost armor which, when active is immune to all damage that is lower than 30% its total value.

Glacial Beam: Ice Shemira prioritizes her attacks against two frontline enemies, channeling her glacial beams to deal multiple instances of damage over time to the enemies. The glacial beams also possess a freezing quality which stacks over time, reducing the enemies’ Haste.

Frost Nova: Ice Shemira creates an expanding shockwave of ice that damages all enemies. Enemies that possess less than 50% of their max health will become frozen.

When the northern winds batter at the door and frost rims the windows, Shemira becomes reflective. She recalls that winter which now seems like forever ago. Her son, only two years of age and barely able to stand on his own two feet, bundled tightly against the cold seeping into their home and looking out at the driving snow with wonder. She remembers the way his breath, so warm, fogged the panes of glass. This was contentment. She remembers the messenger at the door. The skirmishes were happening with more frequency. They needed more men. More healers and medics, he explained. They needed her husband. Niru left the next morning and though she had been assured that he wouldn’t be at the front lines, she had a nagging feeling that scratched at the back of her mind. She felt as if something was going wrong. As it happened, she was right. The fighting continued unabated. What she had expected to be one difficult season turned into several. Eventually even the longing she felt became a dull kind of pain after the seasons turned to years. She received the news with some regularity, him ever optimistic, but now the letters were more a curiosity than the lifeline they had once been. She read over them distantly, barely internalizing the words on the page. After all, if he wasn’t there then what good was this? It was like talking to the dead. All the while, their son grew. Shemira did the best she could on her own but the burden was heavy. She had good work as a tailor, fashioning dresses for noblewomen and wives of the wealthier merchants. She would spend long hours over the fabric, working her needle with a careful hand. Sometimes she would think briefly of Niru and wonder if he too was holding a needle, sewing up some wound rather than fine cloth, somewhere far away from his true duty here at home. Each year when winter came she would watch out the window as Daimon, getting bigger all the time, would play in the snow. She wasn’t unhappy, not truly, but something was certainly missing. It was a day much like the one that stood monumental in her memory that Niru returned. She surprised herself by recognizing him by his gait alone, guarded as he was against the elements. She surprised herself even more by feeling a flood of relief, a surge of joy, at his return. Running outside, she scooped up their boy and ran with him to the father he’d nearly forgotten. Her joy was short lived. The man who had left their threshold that day years ago was not the same as the man who’d come back. He was gaunt, disheveled, with a feverish glint in his eye. Getting settled back into their old home, he spoke at a frantic pace of the things he’d seen. He went on and on about the graveborn they’d been fighting, saying he’d learned more from them than from all his previous studies. “They don’t tire! They require no food or rest. They feel no pain!” He had exclaimed. She knew now that he had been right about most of his claims, but there was one that he had misunderstood. Years more had passed since his return. Years more than that had gone by since she had herself undergone the transformation. It was true that she never felt hunger. It was true that the icy winds swirling around her caused her no discomfort. It was not true that she felt no pain. She was consumed by it. Every memory of her old life was overshadowed by the memory of Niru’s trial and execution and the subsequent death of their son. She stood alone in the cemetery with only her wretched memories to accompany her. Cold tears froze on her face. She screamed her anguish into the howling wind, and the spirits of winter heard her call. The flurries of snow became ever more animated, circling around her in a vortex. She imagined that once or twice she saw faces in the whirling white. When the winds finally subsided, she was donning gossamer sheets of frost. She was the image of death. A perfect picture of endings.
Show more
Show less 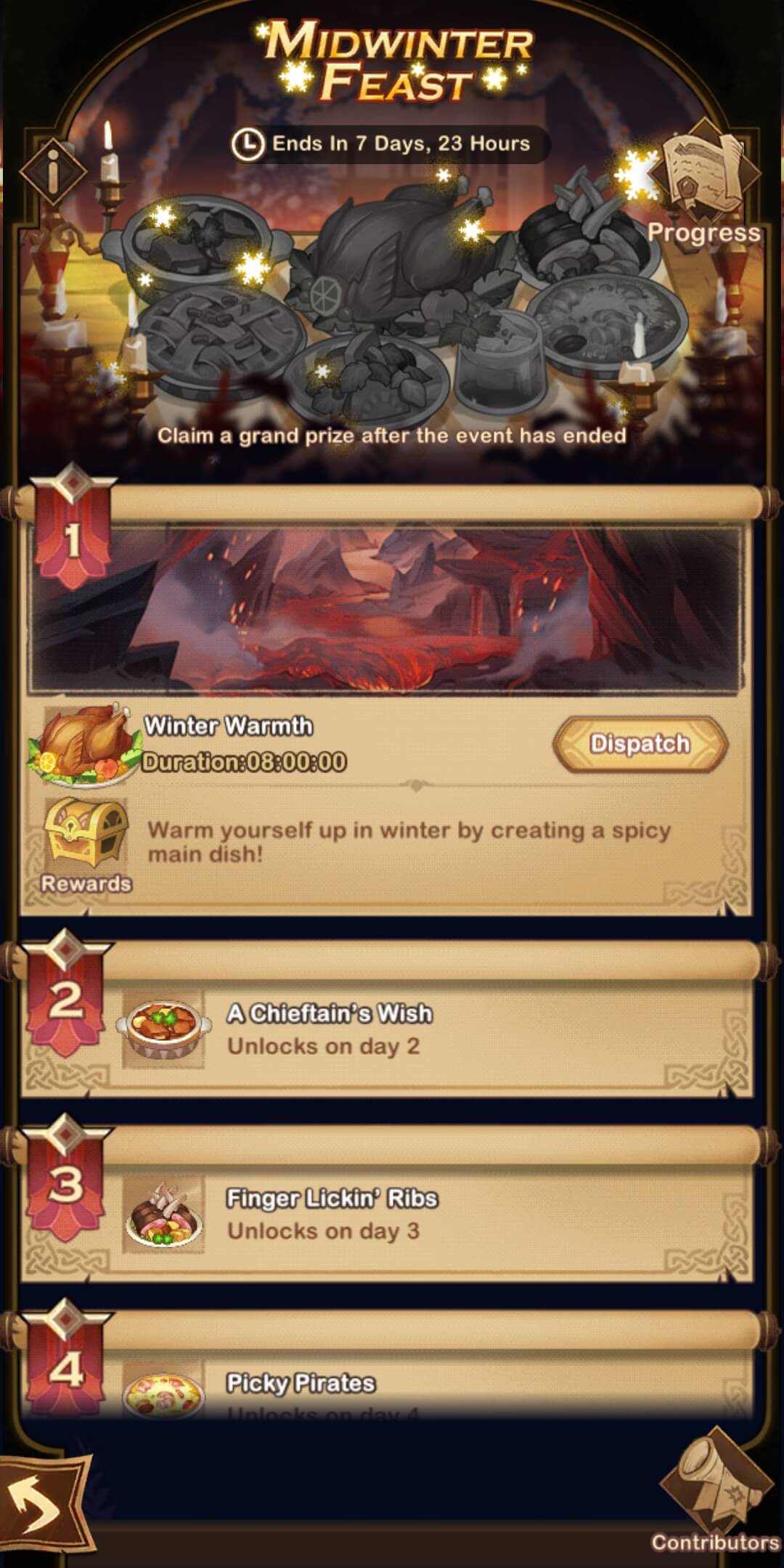 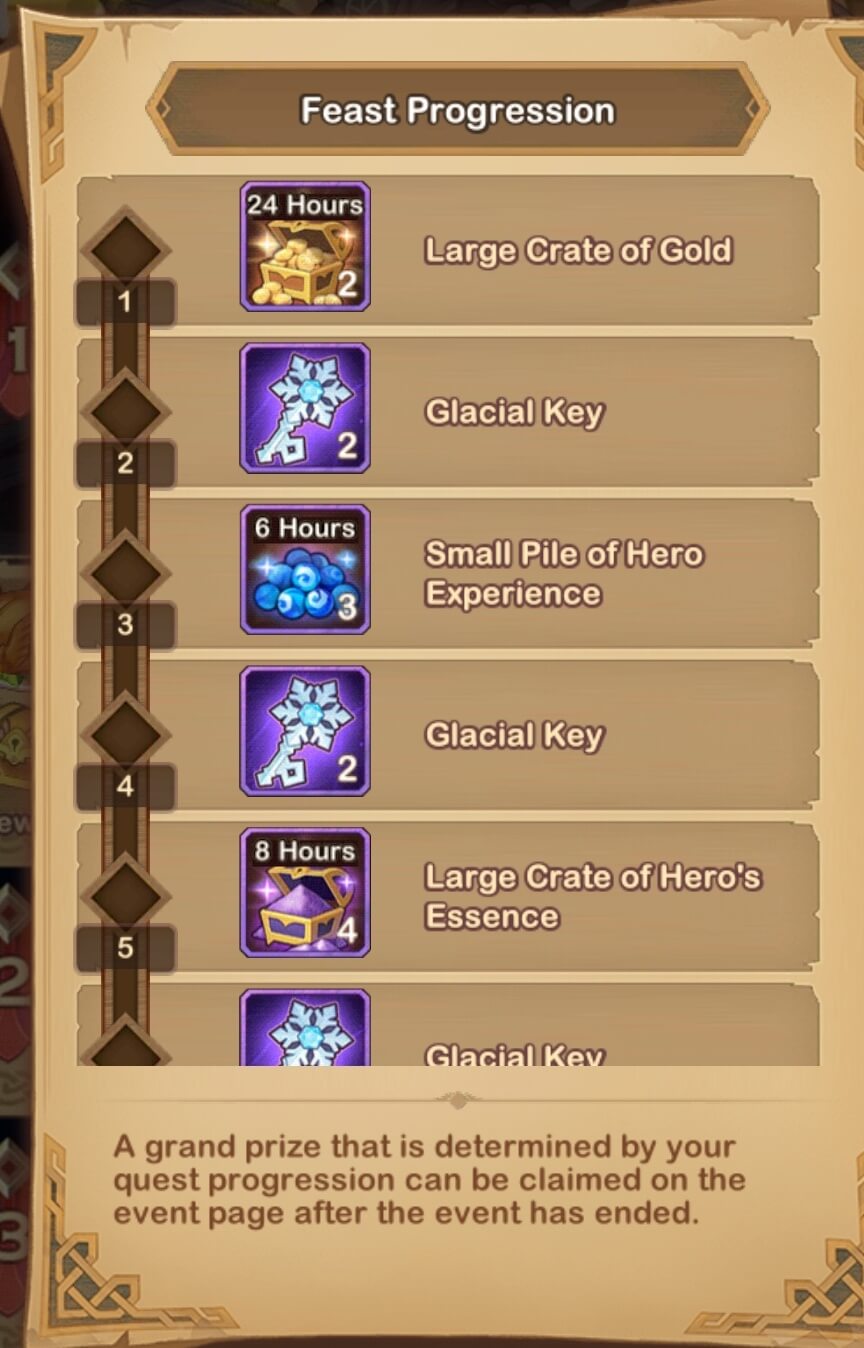 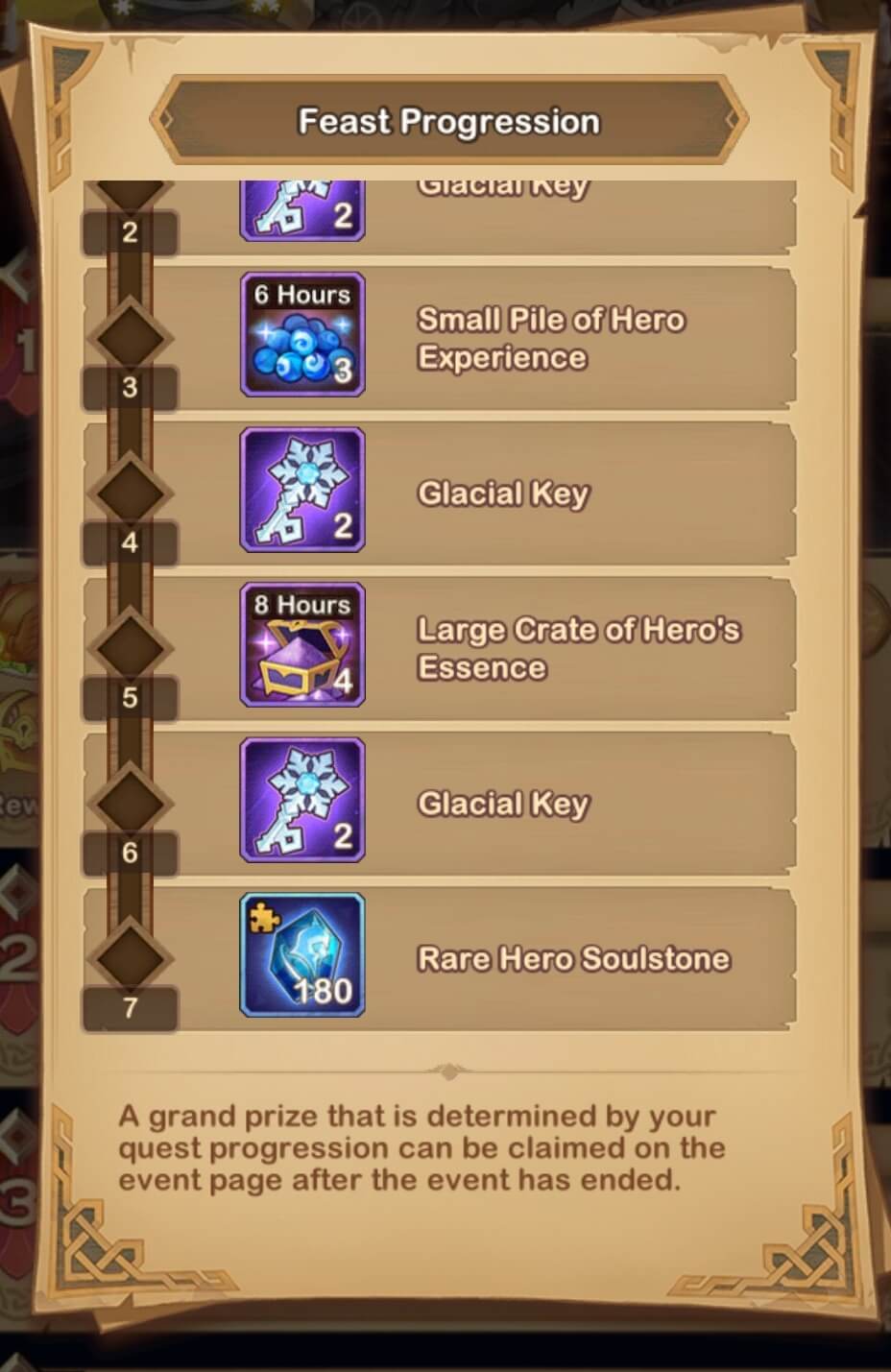 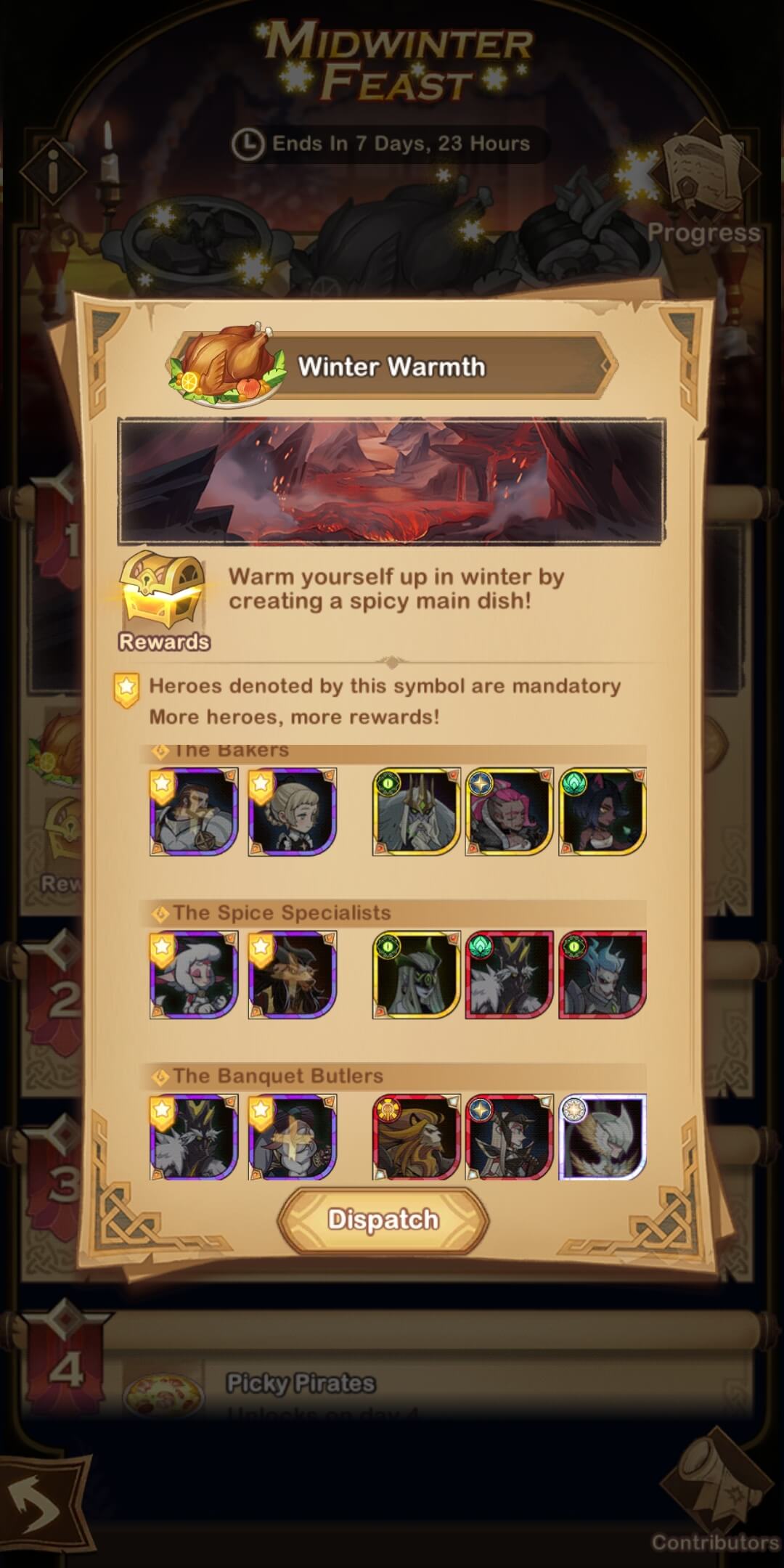 Why you put ridiculous heroes. I need 1 lucius and 1 rosaline for asenced.

Because everyone loves Shemira hehe

When did the event start? I don’t see it, but I did get an update though nothing changed lol

It’s already started. Maybe because your left sidebar is too long so that the event cannot show there?
Try to restart the game and if it’s possible, please upload your game screenshot here!

This sounds stupid, but how do I post a picture because I can’t find a button or an option list to do so.

I downloaded the APP update in the Google Play Store, then I received an in-App update of 201.81M? which downloaded too. I closed and reopened the game, I also repaired the game.

Can you upload the screenshot to imgur.com for now? I will allow users to upload media soon, just testing that function for now :D.

The Event menu is located at the left sidebar of the game.

I have the thing to accept the 2 gifts on the event sidebar but nothing else.

Some proble here. Event is not visible

Is it showing up for you now?

I have the same issue. No event started yet

Sorry for the misinformation. It’s not live for the official server yet. Hopefully it will be live in the next week!

I’m starting to think it’s not gonna go live on the official server :/

I will live a few days after the Voyage. We will have it by Christmas!

Sorry for the misinformation. It’s not live for the official server yet. Hopefully it will be live in the next week!

i have found the special reward but i can’t go to the next island!

What is the next island? Where are you at right now?

How do the Emergencies work ? I haven’t seen one since the beginning of the event.

I also haven’t seen it anywhere yet hahaaa

In another forum they mentioned that is just a pop up notification which you receive in game after clicking on it they said that it gave them 80 contribution points.

It’s the only info I found so far.

Thank you so much for the info buddy!

So far I’ve gotten 3, it might happen every hour at random but I am not sure.

I would love confirmation if this happens every hour or how many times within the 8-hour window. I’ve had the quest popup right in the beginning, right at the end with only 6 minutes left, and right now one popped up at 6:30:00 mark.

So how many keys will you get in total for midwinter feast? Nobodu answered this yet.

Copyright © 2019-2020. All rights reserved.
AFK.GUIDE is an AFK Arena fansite. It is not affiliated with Lilith Games in any way.
Download & Play AFK Arena on PC & MacDownload
29
0
Would love your thoughts, please comment.x
()
x
| Reply