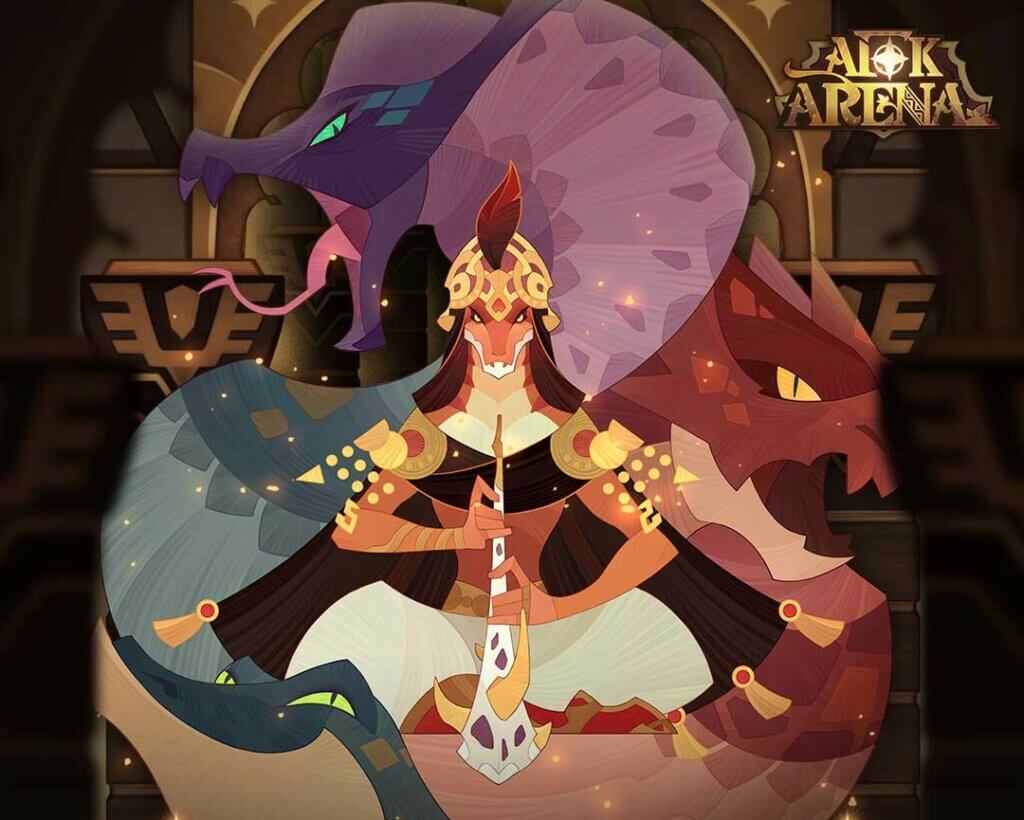 Thesku plays his bone flute and deals 240% damage to all enemies. If an enemy is marked, by more than 3 Serpent’s Marks, they are petrified and turned to stone, becoming unable to complete any actions or recover Energy for 5 seconds.

Thesku commands his snake, Zilsu to spit a deadly neurotoxin at the enemy target with the highest Attack Rating, dealing 220% damage to them, causing, them to become intoxicated.

While in a state of intoxication, the enemy is unable to recover any Energy and may only use Normal Attacks for 4 seconds. During this time, damage dealt by the enemy’s Normal Attacks is converted into health for the target they are currently attacking.

Thesku commands his snakes, Zilsu and Szetzu to breathe fire upon any enemies within range, dealing 160% damage three times to the targets.

When Thesku deals damage with his Normal Attacks and other abilities, targets are marked with a Serpent’s Mark, which causes them to lose health worth 30% of Thesku’s Attack Rating every second, for 8 seconds, but shall not die as a result.

Once the Serpent’s Mark has been stacked 5 times, the mark disappears, and a venomous explosion is triggered, which deals 260% damage to enemies and stuns them for 3 seconds.

Each time Thesku has cumulatively lost 20% of his max health, once his current ability ends, his snake Ilshu grants him a shield that has a value equal to 15% of Thesku’s max health, which exists for 8 seconds.

3/9 Ability: When an enemy is struck by the Ultimate ability “Ancient Terror”, if they are marked by fewer than 3 Serpent’s Marks, they will be marked by an additional 1 Marks.

9/9 Ability: Thesku is immune to fatal damage the first time he is dealt it, and he recovers 25% of his max health, and his Energy is immediately restored to 100%, but he will be unable to use his abilities “Cursed Flame” and ” Serpent’s Guard” for the remainder of the battle.

Thesku is one of an ancient tribe of Sapera, a tribe that has shared its existence with snakes and other vermin for generations within the Bone Glades.
Infamous for his bloodlust and emotional detachment, he bears no love for any living thing, with a special loathing for humans. Only those that can fill the belly of his precious serpentine babies get a taste of his appreciation.
Just moments after arriving in the Land of the Exiles and receiving his commission reward, one of Thesku’s beloved pets took a fancy to some reward of their own, unceremoniously swallowing the smiling benefactor before that smile could be…

… replaced by terror.
Many regarded him as an unpredictable “weirdo”, but just as many far more dangerous people regarded his ruthlessness with awe.
All in the Land of the Exiles, even the deadliest of desperadoes, knew better than to dismiss the gleams of erratic temperament flickering within his serpentine eyes. After all, the whining mewl of his bone-flute told many more tales than the sands of the Lands of the Exiles.
Tales no-one knows. Tales that are about war.
Decades ago, the Maulers and Lightbearers were at war. As the war reached its peak, the usually secluded Sapera were forced into the fray.
Joining the charge with his kinsmen, he went into battle for the very first time. With the four snakes he has raised accompanying him, Thesku got his first taste of combat. He and his snakes were thrilled.
With the Sapera’s expertly bred and trained snakes, their extraordinarily tough scales presented an insurmountable challenge for the Imperial Soldiers. Coiling their long bodies around the humans’ frail frames, their venomous bites and poisonous miasma were a nightmare.
To the surprise of friend and foe alike, this black sheep clan was suddenly the secret weapon the Maulers had needed. However, the pace of battle changed quickly, and it wasn’t long before counter-measures were launched by the Empire.
Masks to prevent the inhalation of the poisonous miasma, anti-toxin to prevent harm from venom, and crucially, specially engineered traps designed to strangle the Sapera’s pet snakes upon capture. Suddenly the Imperial Army was seemingly invulnerable.
With no protection from the other clans, Thesku watched as his people become easy targets. Sapera lack the raw physical prowess of other Maulers, without their pets, they were suddenly mere sitting ducks, their survival chances were slim.
Their numbers were slashed mercilessly, one by one Thesku watched his brethren fall. Brothers, sisters, cousins. Blood relations are a pillar of Sapera values, and when the first fell, it was sure to mean there would be no simple resolution for those that would follow.
Thesku was more alert than the others, ever observant of the state of play, maintaining a constant vigilance. The Sapera are regarded as an ugly clan, a long-lived but unpleasant folk. Keeping the company of serpents in the remotest reaches of the land disinclined other Maulers to engage with them. Intentionally, or otherwise.
With the loss of so many friends and family, Thesku realized that this war offered no reward to his dear Sapera. Nothing but further loss would come to continued participation in this war.
Unfortunately, it was too late. The rest of the Sapera were already overcome by their hatred.

Seizing upon this opportunity to exploit their vengeance-poisoned minds, the Imperial Army planned to wipe out the Sapera entirely. Captured in a single maneuver, the Sapera clan’s chieftain was murdered. It would be in the moment that Nuztei. Thesku’s most cantankerous snake. would ignore the commands given to him, instead breaking off to confuse the enemy in pursuit. Thesku would fortunately escape , but Nuztei would be tragically caught and strangled, the impact on Thesku came to be far-reaching.
From that point on, he gave no further thought to the war, nor did he pay any mind to the plight of his clan. He had made his heartless decision.
With his three surviving snakes in tow, Zilsu, Szetzu and Ilshu, Thesku fled to the Land of the Exiles. The tragedy of the war provided him with all he needed to gain a firm position within the Land’s confines.
Time has flown by, and in the blink of an eye the youngest of his snakes, Ilshu, has now grown to be as huge as Nuztei had once been. Having joined the Quicksand Claws, Thesku barely has time to lose himself in joyless memories of the past.
Only on those rare nights when by after another, enemies and threats are extinguished, does Thesku’s bone-flute whine its low mewl into the darkness, recalling the memories of those warring nations.
But now, he’s no longer a target on the field, but instead the one behind the curtain pulling the strings.
The sound of his raspy flute drifting across the Scorched Expanse, penetrating the veil of sand dust whipped up by the desert winds, striking a deep-seated fear in the hearts of those would-be enemies… The same fear the Imperial soldiers felt upon glancing the snakes on the battlefield.