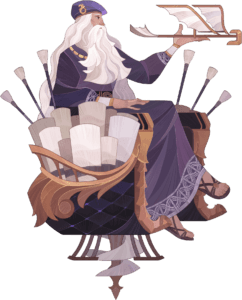 Leonardo creates a work of art on his canvas, and deals 250% damage to all enemies that were splashed with paint, locking them in a portrait frame, paralyzing them for 8 seconds.

This ability can only be triggered when there, are enemies currently splashed, with paint on the battlefield.

Leonardo flings paint at a random enemy, dealing 160% damage to them, covering them in paint for 12 seconds.

The enemy covered in paint has their Tenacity reduced by 10 points and their Dodge reduced by 120 points.

This ability prioritizes targets that are not currently covered in paint.

Each time Leonardo receives close-range damage that is more than 10% of his max health, he launches his seat into the air, carrying himself away from the nearby enemies to land in the safest area of the battlefield.

This effect can be triggered once every 10 seconds.

When Leonardo launches into the air, enemies within a certain radius will be dealt 220% damage and lose 40 Haste points for 5 seconds.

Leonardo creates a cannon which he uses to deal 330% damage to all enemies within the cannon’s scope.

Enemies are dealt more damage from Leonardo’s cannon the farther away they are from it. Damage dealt can be raised up to 30%.

3/3 Ability: Leonardo recovers an additional 10 Energy points per second for every enemy that is covered in paint.

9/9 Ability: Enemies that are struck by the ability “Work of Art” will receive 45% more damage for the following 8 seconds.

In the evening gloom, Leonardo looked over the manuscript on his desk, the manuscript he was preparing to seal away. A gust of wind surged through the window, turning the pages in a flurry, settling eventually on an image of a winged-aircraft. His gaze fell over the design, his mind wandering absently to a childhood dream he held.

The infant Leonardo tucked up in his crib opened his eyes wide with a startle , freshly awoken from a lingering dream; Over his head had hovered a peculiar bird, its large black plumage stroked his cheek and branded his heart. He was mesmerized by this airborne creature.
Standing in the Florence streets, a young artist gently caresses the feathers of a small bird sat in his palm. As a student, Leonardo purchased many caged birds, observing their wing structures, detailing their plumage. Opening up his palm, the bird rose into the air, beating its wings in a fantastic arc, curving them against the azure sky.

In a single deft stroke of a quill | pen, the final arc was set on the sheet. Now in his twenties, Leonardo frowned and enthused as he fussed over a bird-like flying machine. He called it, ‘Aquila’. Inspired by bats and birds, it possessed membranous wings. Under the sweltering Mediterranean sun, he brought out an elaborately pieced-together prototype model of the Aquila, and launched it high into the air. As the wing’s membrane cut through the air as it flew, it generated a high-pitch whistling that accompanied the miniature Aquila’s maiden voyage.
Crashing unceremoniously into the ground, the dull thud of impact wounded the now middle-aged artist. This failure was not the first, nor would it be the last. At 44 years old, Leonardo was no longer a spritely youngster, but his dreams of flight were as vivid as ever. Gathering up the shattered pieces of the Aquila, he took notes on the weaknesses and reasons for failure. He would soon tweak the design and attempt another trial. He could already envision its graceful flight across the setting sun.

The warm glow of the setting sun draped everything in his room in pale gold. Already 67 years old, Leonardo’s wrinkles were deep, and the shadows cast by the sunset carved out their lines. Time has been unkind to this famed artist, his paintings bestowed with eternal youth and beauty, but his body growing elderly and frail. Aware of his growing weakness, he lays on his bed and looks over at his design manuscript. Helicopters, gatling artillery, rotating bridges… So many ideas, all conceived by his hands, yet most fated never to leave the paper they’re drawn on. The materials and technology of this era just aren’t enough to bring these fantastical designs to life. Sealing away the manuscript, Leonardo would bide his time, waiting for an age that could realize its potential.

Laying on his deathbed, it were as though he were once again a baby in the crib. The black plumed bird he saw in his dream materialized from within his manuscript, floating momentarily above him before gradually taking the form of his Aquila. It gently brushed the very tip of Leonardo’s nose as it flew out of the window and across the setting sun. As the Aquila vanished into the boundless skies, the last flicker of life in the old artist’s eyes was extinguished.

Waking up, he was now in Esperia. Met by the sight of so many wondrous creatures in flight, he instinctively reached for his brushes, but of course found none. It was at this moment something miraculous occurred – a mystical light sprung forth from Leonardo’s body, and suddenly a brush was right there, in his hand. Smiling with childlike delight, he surveyed the land before him, rich with the infinite possibility, and set out on a journey to the great unknown.

“Creation is my miracle.”