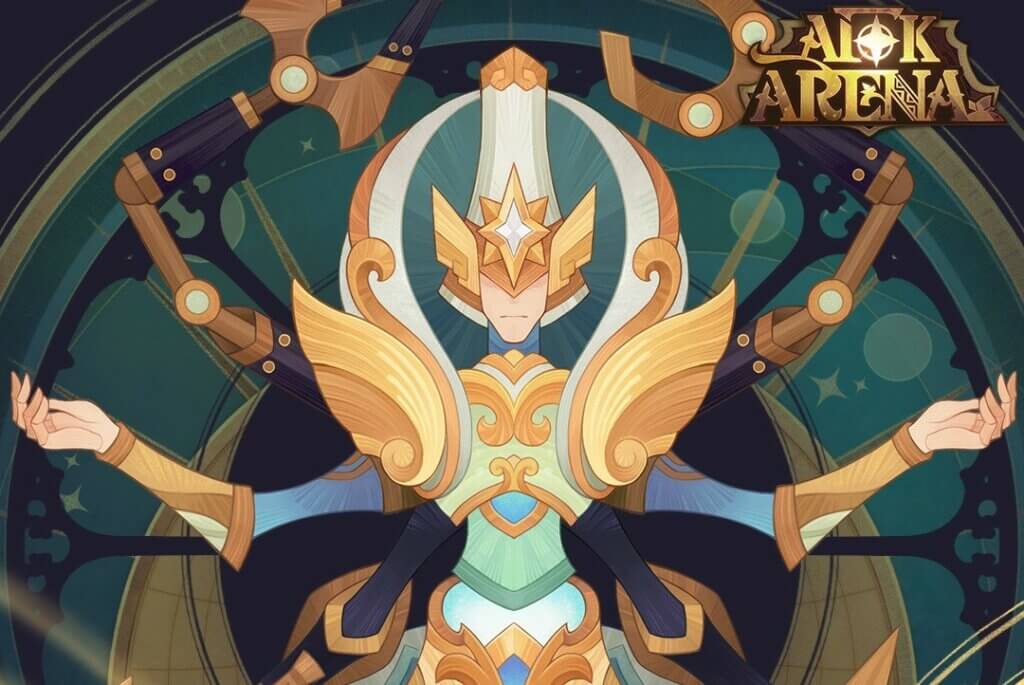 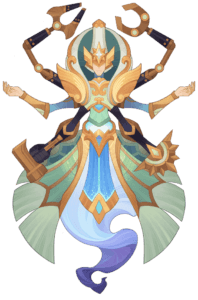 Haelus forges an obelisk in front of himself which is imbued with all of his own starting attributes which is immune to control effects and is able to mitigate 30% damage.

The obelisk will deal 150% damage to the most injured enemy target, and based on the damage it deals, shall generate a shield for its most injured allied target, which is able to mitigate, damage equal to at least 100% of the obelisk’s Attack Rating.

If this Ultimate ability is used while an obelisk is already present on the battlefield, then the obelisk shall have its health fully restored, and shall be leveled up once.

The divine cube shall persist up until the affected ally suffers damage which is greater than 40% of their max health during a single attack.

This ability cannot be used on summoned entities or allied targets that have already been granted a divine cube.

Haelus generates a divine field for the most forward allied hero, which deals 260% AoE damage to any enemies within range, also granting the affected ally a shield that is able to mitigate 220% damage, which exists for 8 seconds.

When any ally receives any type of shield, the shield’s value is increased by 20%, but cannot exceed 300% of Haelus Attack Rating.

3/3 Ability: May be used once per battle. At the start of battle a divine cube is automatically created and placed above the head of the allied hero with the highest Attack Rating (excludes Haelus).

9/9 Ability: Divine cubes will no longer disappear as a result of suffering damage, and will grant the cube’s carrier a shield which can mitigate 270% damage once every 12 seconds.

E30: Enhance the ability Sphere of Craftsmanship, Enemies within range have their shields simultaneously dispelled.

E60: Enhance the ability Born Blessings, When an ally possesses any type of shield, they shall recover 15 Energy points per second. Each ally can recover up to 300 Energy points as a result of this ability per battle, Haelus has no recovery limit.

Haelus had a dream. In that dream, he was aboard a huge airship. He sailed through the cloud and mist, passed obstacles, all the way up to the mountain peaks, where the gods reside. When the brilliant Divine Light gently showered down upon his head, he was like an infant who had received the full understanding of his mother. His tears would not stop flowing. I Born into a family of craftsmen, Haelus was frail at birth and at just one year old, he fell gravely ill. Hopes for his survival were so slim that his grief-stricken father prayed desperately to the gods, hoping they would pity his son. If the child survived this ordeal, he would willingly serve the gods for the rest of his life. Perhaps the gods heard and answered? Haelus’ intense feverish daze lasted for several more days, but suddenly dissipated in a miraculous recovery. The child not only grew up well, but later displayed an extraordinary talent for mechanical engineering. Haelus lived during the period later known as “The Era of Man-Gods” – an era of insanity in which everyone was afflicted with the disease of fanaticism,“ Mania”. Architecture soared higher and higher, people used god-given magic as they pleased, luxuriant materialism was practiced, and pomp and circumstance was indulged in. But despite humanity’s mastery of powerful magics, it continued to be shackled by the fetters of human nature. Few people were able to devote themselves to it, flitting from one thing to another, and most were discouraged by the abstruse and dry philosophies.

Haelus’ academic journey was not a smooth one. His natural introversion caused him to be ostracized by his peers, his unique talent elicited a blend of jealousy and fear as those same peers felt they couldn’t understand him. Haelus had precious few friends, but one was companion was a young man named Gaius. When Haelus was pushed to the ground by jealous students, it was Gaius who stood up for him, sparing the timid genius from greater humiliation. The friendship between the two men continued into adulthood. Gaius, a born member of society’s upper classes, made a proposal to Haelus – build the “Airship” he had designed as a student. An airship. Haelus had imagined a flying mechanical creation, capable of long-range voyages that could surpass the dragons and even reach the distant mountain peaks. With Gaius’ considerable financial support and material resources, Haelus devoted himself to his airship.

Through countless days and nights, beneath the papers stacked up to the ceiling, Haelus watched as each part of the ship he designed on paper was realized into a final product. The recurring dream he had so often recalled as a teenager may be on the verge of becoming reality. After ten long years, the very first man-made airship was born. Such a historic success inspired the people of the world, and Gaius achieved an unequaled level of prestige. He took center stage in the realm of men, wielding incredible authority, and began drafting a blueprint for humanity to become “Man-Gods”. Inch by inch, Gaius ran his fingers over the airship hull, savoring the sensation as if he ran his fingers along a freshly sharpened blade edge. “Haelus, do you not want to control your own life? Do you not wish for Esperia to be the master of its own fate? If the gods are willing to impart the secret of eternal life unto me, then my airship will present them with the finest of tributes, but if not… The hull shall be laden with weapons.” Hearing Gaius’ words, Haelus was struck by alarm. Such ambition didn’t sit well with him, and for the first time in his life, he raised an objection to Gaius, “This is blasphemy, I cannot agree with this.” “My dear friend, have you so easily forgotten those that once trampled upon you?” Gaius reached out his hands,“ The gods of Esperia are above all beings only because of their immortality. You know , Those Above have always had choices to make; they can grant humanity their magic, and they can also choose to trample us underfoot.” Gaius continued in his persuasions, urging Haelus to help him design weapons and armor, “Humans have a short life, so of course the gods can choose to turn a blind eye to us. But on what merit? After all, humanity is already on par with the gods, why not follow the natural progression of matters and simply take their place? Ultimately, there isn’t a soul that can guarantee the gods will not one day choose to trample us into the mud. Building an airship or purging dissenting political enemies was all the same to Gaius. There is one single objective – to become the Supreme Authority Above. This aspect of Gaius’ agenda was something that Haelus could never come to understand or reconcile. He refused to play a role in any more of Gaius’ schemes. Influenced by his father’s devotion to the Divine Light, Haelus grew up in reverence for the gods, always in awe of them. Shortly after their disagreement, there was a devastating explosion in Haelus’ workshop. Some say the explosion was Gaius’ political enemies removing his right hand man, whilst others speculate that it was Gaius himself, rattling those he regarded as beneath him. Whatever the truth of the matter, Gaius was a military officer well-versed in the arts of warfare, and this occurrence made for a fine excuse to launch into war. The whole country was plunged into violence, with countless heads falling and rivers of blood flowing, as Gaius finally established himself as the dominant warlord. Amidst the explosion, Haelus’ body was instantly ripped asunder, shattered into tiny fragments. When he next opened his eyes, he came to discover he was somewhere utterly incomprehensible. A place so far beyond the limited understanding of humanity, a higher plane only accessible to the gods. Here, he can see time, where mortals carve myriad things, and time carves mortals. He also saw how humanity is the architect of its own confines, influenced by the laws of the mundane world and the weaknesses of human nature, ensuring they can never break through their limitations. A gentle sigh echoed across an unknowable distance. A god thumbed through pages upon pages of Haelus’ blueprints and design notes, his admiration for the pieces sincere and heartfelt.“ Humans are insignificant, but their creations can be truly remarkable. Your wisdom and focus have already brought you closer to the essence of creation than anyone else in this world. Creation will always be more meaningful than destruction. Intention is the golden rule of creation.” The god’s voice was accompanied by a tremendous wave of energy that surged through Haelus’ fragmented corpse, reshaping him with sparks of light as the haze before his eyes began to clear… Haelus had been chosen by the gods themselves, and now he too, would be a god – the Master Architect. In that very moment, he came to understand the true essence of creation. “It was always right there, but only now do I truly see.”