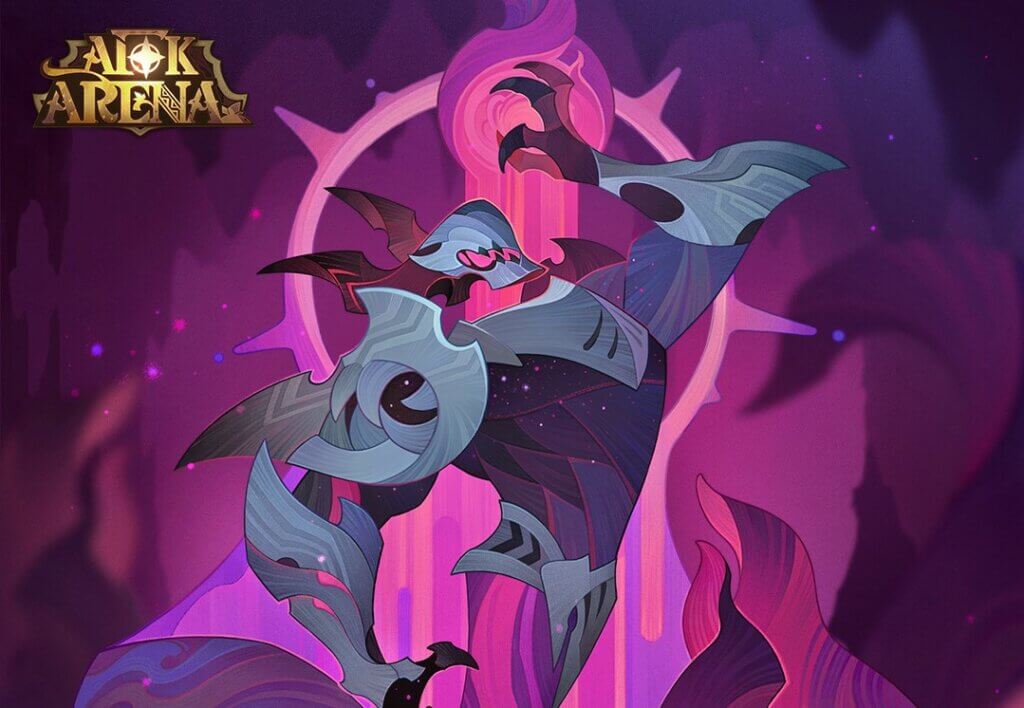 Ezizh produces a Nightmare Shockwave that deals damage equal to 280% of his Attack Rating to all enemies, rendering their Ultimate skills unusable for 2 seconds.
The shockwave ’causes the battlefield to be transformed into a hellish nightmare for 10 seconds.
Ezizh is unable to recover Energy while the battlefield is transformed into a hellish nightmare, but he will produce a Nightmare Shockwave once every 4 seconds.

At the start of battles, Ezizh causes the enemy mirroring his own position to fall into a nightmare state, up until they receive damage equal to 40% of their max health, or 10 seconds have passed.

Ezizh uses an abyssal tentacle to deal AoE damage to enemies equal to 260% of his Attack Rating that also drains their sanity, forcing them into a state of insanity for 8 seconds.
All enemies that are insane lose 12 Tenacity points, and all allied heroes gain 6 Tenacity points.

How to ascend awakened heroes:

Lvl 2: Passive. When Ezizh suffers from a control effect, the damage he receives over the following 6 seconds is reduced by 10%.

Upgrade her furniture to upgrade the Mind Fay skill level.

3/9 Ability: Enemies that are currently in a state of insanity are additionally terrified for 2.5 seconds if their sanity is drained again.

9/9 Ability: If an enemy is in a state of insanity when they are dealt damage from Ezizh, the following damage dealt to them from Ezizh, is increased by 6% per attack, up until 24% is reached. The stacked damage bonus shall be reset when the insanity effect wears off.

[Engraving Lvl 60] Each time nightmare energy is transferred to a target in a state of insanity, the damage caused by following energy transfers is increased by 15% of Ezizh’s Attack Rating, and will also cause enemy targets to enter a state of insanity.

“If you could choose, would you pick a wondrous dream, or a spine-chilling nightmare?”
The patient sat before me asked.
Meeting his bloodshot gaze, it was clear his question was asked in all seriousness. But simply saying “a wondrous dream, of course” was becoming increasingly harder to say.
Laughing at himself with a mocking chortle, he began to tell me of his experience.

I live in a far out backwater village, right at the cusp of the Empire. It doesn’t have much to do with the rest of the world, but there’s enough to get by on. The villagers live a simple life, it’s tough, but not so tough that they can’t handle it. At least, that was the case until a few months ago…
A few months ago, folks in the village started having nightmares, lots of nightmares. Farmers would see their crops fail and families starve, merchants would see bandits pillaging and raiding. The military veterans who’d served with the Frontier Regiment would see blood-soaked Maulers, cascading over the border and slaughtering the townsfolk… In short, they all dreamed of the things they feared most, the things they didn’t want to confront.
In the beginning, folks were a little anxious about it, but found comfort in reassuring themselves that it was mere ” coincidence”. But then as time went on, the number of folks having nightmares grew, and so did their anxiety. The whole village was enshrouded by a sense of unease.
The Village Head sent for help from the Temple, but the village was so out of the way that getting there and back would take the best part of three months. There was nothing for it, we had to wait.
Things carried on this way for about a week, the entire village plagued by nightmares. Everyone was on edge, their dark-ringed eyes heavy with sleep deprivation, they were afraid to sleep but too exhausted to avoid passing out. Unable to fend off the exhaustion, they would eventually pass out, only to be reawakened by those horrific nightmares.
One night, I slipped into yet another nightmare. However, something about this one was different. A little pink-haired girl with butterfly wings appeared, fluttering around, a shower of magical glittering dust falling through the air as she flew. Whatever the dust covered, the nightmare beneath it seemed to dissolve as if it were snow in the sun.
“Ezizh! I will not permit you to foul people’s dreams any longer!”
She yelled out. Opposite her was some sort of demonic creature, it rose from the nightmare that the dust had not yet touched. Its arms had been tied up with vines and an ominous black mist permeated the air around it.
“Go ahead Tasi, try your best.”
That was the moment it dawned on me. This demonic thing, a Hypogean called Ezizh, was responsible for the villagers’ nightmares. Just before I lost consciousness, the two began to face off against one another.

When I reawakened, the villagers were thrilled, all talking about Tasi and how she appeared in their dreams. Even though the nightmares hadn’t gone entirely, there was now a ray of hope for us.
Several days continued in much this way, as Tasi appeared in everyone’s dreams and fought fiercely with the Hypogean. The decisive battle happened in my dream, a wondrous dream and a spine-chilling nightmare mingling and alternating. Sometimes I would find myself enveloped in an ocean of flowers, other times a sea of flames. The endless back and forth between dream and nightmare was seemingly going to swallow me, and yet I was fully prepared to be swallowed.
On the brink of losing my grip on the world, Tasi fluttered her wings vigorously, glittering dust gushed forth shattering the stalemate between dream and nightmare. The nightmare was totally dispelled, and the Hypogean fled. The dust spread all around, weaving the most extraordinary dream I’d ever seen… Where once stood desolate, barren wastes, now grew never-wilting blossoms, rivers of fine wine, and a fruitful field of golden wheat. No poverty, no famine, no pestilence to be seen. I saw the Village Head embrace his long deceased wife, I saw the military veteran return to the barracks in perfect health, and I saw the merchant smile as he opened a business in Savannah, greeted by an endless flow of customers.
The very next day, no-one roused from their sleep until after midday. One by one they stepped out, teary-eyed with emotion as last night’s incredible dream still lingered. Having awoken from the dream, life could gradually be restored to normal, or so I thought. But truly seeing the impoverished land and run-down village after being immersed in such a beautiful dream left me with a feeling of disappointment.
Three days later, the villagers erected a statue of Tasi, giving up whatever food they had by way of offerings. Passing by it, everyone bowed with reverence, perhaps hoping that Tasi would return and bring everyone another wonderful dream.
A week passed and Tasi did not appear. The food left in offering was reclaimed, and the villagers no longer bowed to the statue.
Another few days went by, and still Tasi didn’t appear. The village folk’s hopes turned to disappointment, and then unbridled rage. Some even began to curse Tasi under their breath, condemning her selfishness and neglect.
I’ve no idea who cast the first stone, but one night someone did. By the time the sun rose, the statue had been smashed to pieces.
The villager’s desire to return to that beautiful dream didn’t wane with the passing of time. Every glance at the barren land and shabby houses swelled their desire to return to their dreams. Eventually, some folks just shut their doors and stayed in bed, hoping beyond hope that the beautiful dream would return. But it never did.
The wheat crops became overgrown with rampant weeds, uncared for by the people. A constant reminder of the difference between dream and reality. The worse reality became, the more we wanted to go back to that beautiful dream. The village folk became increasingly irritable, their desires never being met and the feeling of dissatisfaction welling up. Trivial matters were enough to spark brawls.
Then someone threw the first punch, then a second, and a third… The village descended into chaos. Dazed, it seemed like I could see an eerie dark mist emanating from everyone. Like vines, it climbed and wrapped itself around them, spreading and condensing into a foggy cloud that enshrouded the entire village.
Suddenly, a huge, ghastly mouth appeared from within a void, swallowing the dark mist.
“Nightmares give rise to fear. Beautiful dreams give rise to indulgence…” The Hypogean’s words rang true. “The will of mortals is truly fragile and easily broken, but the power of its desire is beyond compare.”
The Hypogean’s silhouette emerged. It had broken free of its bonds, the huge figure of a beast materializing into something more solid. Tentacles twisted and writhed from its back, reaching out and blotting out the night sky.
Then, I understood. It had never left us. It had allowed itself to be defeated, to make us feel the relief of Tasi’s aid, and to feed on our negativity when it was gone. Our negativity had become the sustenance for it to break free and descend into our reality…
“So how did you escape?” | couldn’t help asking after hearing all this.
“Tasi.” The patient replied, smiling bitterly. “I suppose the Hypogean wasn’t quite free of the dream realm yet, when Tasi charged in and both vanished from sight.”
“Vanished?”
“Who knows where they went. I don’t. Maybe they’re still in the dreamworld fighting?” The patient paused a moment before continuing, “I really want to see Tasi again… To thank her in person.”
Although the patient’s expression conveyed a sense of genuine sincerity, I couldn’t help but catch a flash of madness in his bloodshot eyes.