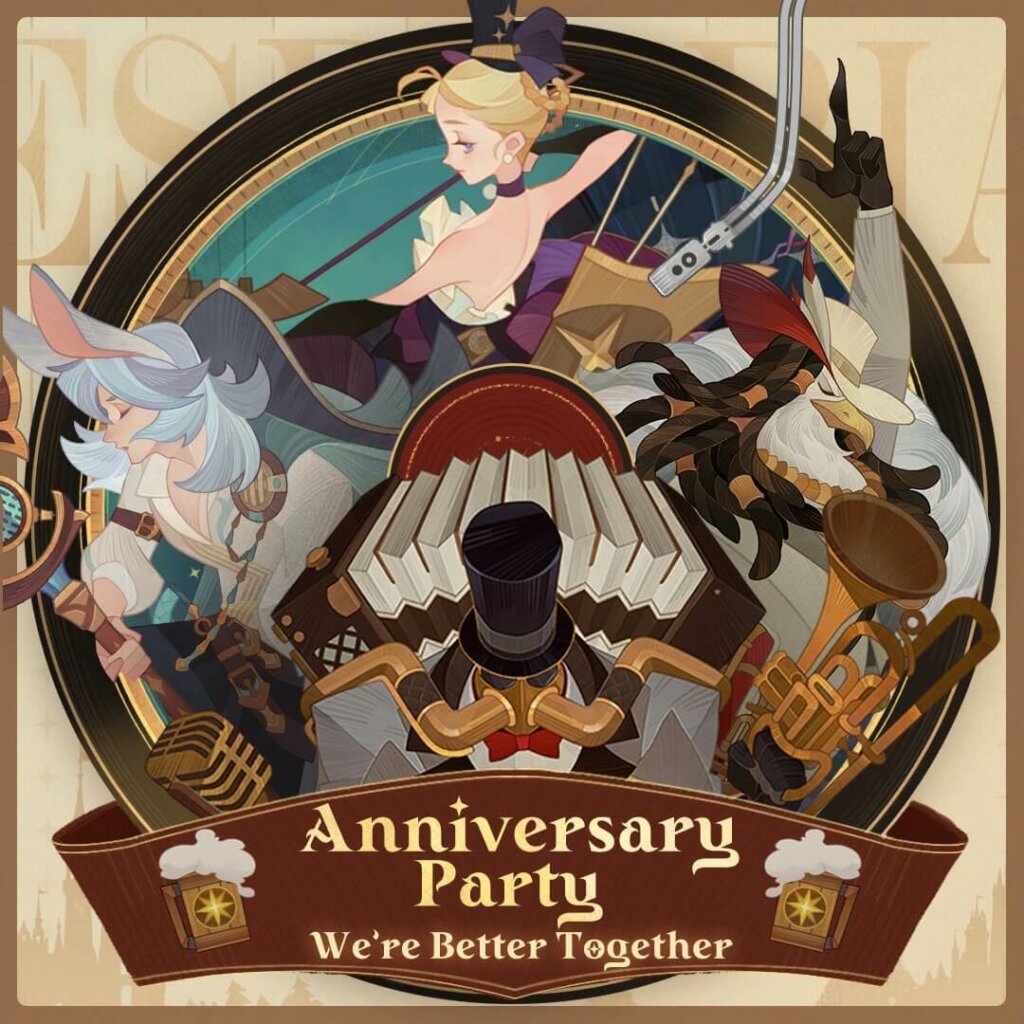 Since the AFK Arena 2nd Anniversary Event is gonna be very huge, we decided to create this specific page to upgrade all information regarding it!

When is the AFK Arena Anniversary Date?

It’s April 9th! Stay tuned for a lot of events in AFK Arena during the upcoming weeks!

Skriath Skin can be acquired for free. Gwyneth skin costs for $10.

A Musical Tribute: Login every day to receive rewards in 7 days. Find 7 musical notes with the given clues to unlock the final chest sooner.

How to find Clues (Easter Eggs)

The Forest Escapade: New challenge opens each day, defeat the enemies to earn the rewards. Rewards include Raku, Peggy, new Dolly skin, Skriath Skin, and a lot of other stuff!

Players who deal the most damage to the boss also receive extra rewards daily.

Best Teams for The Forest Escapade?

A Look Back: Interesting function that shows your and the game’s historical records since the beginning: Your best summoning day, who are your best friends, who helps you the most, how many heroes you have obtained, etc.

The AFK Arena 2nd Anniversary Event is happening soon with a ton of special events & valuable rewards, including the 4 new skins for Gwyneth, Lorsan, Izold, and Skriath! 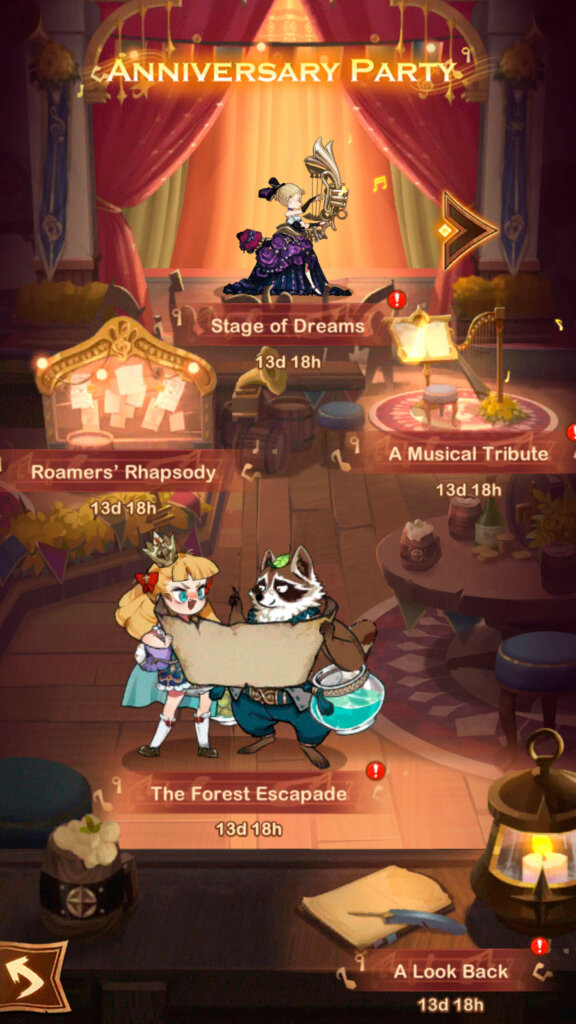 Find all clues in-game to open the final chest sooner!

1. During the event, players are able to claim up to 7 daily login rewards. 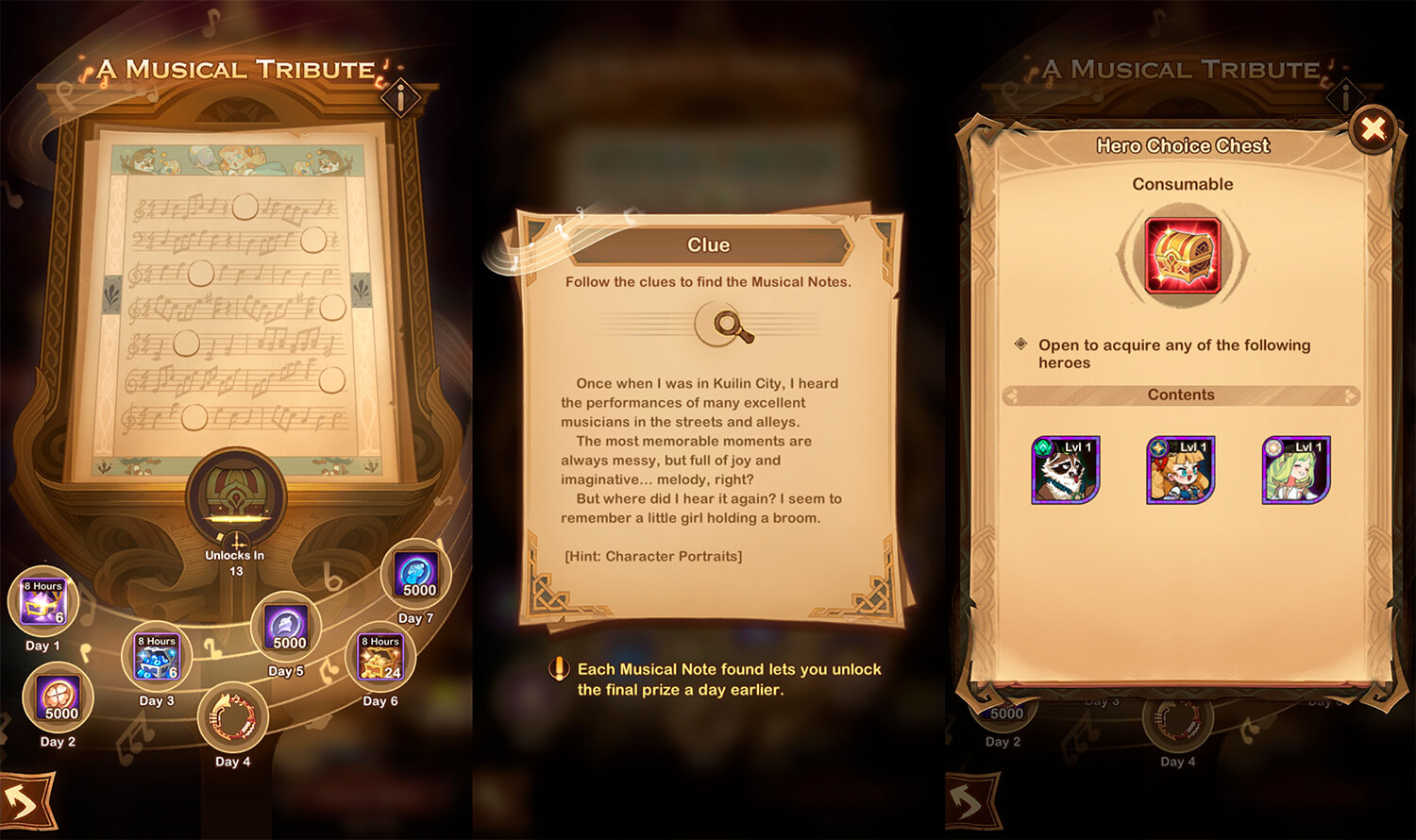 3. In addition to daily login rewards, a final reward chest will be unlocked on day 14 of the event. Players can unlock this reward chest in advance by illuminating Musical Notes.

5. Players can tap on each illuminated Musical Note to play its corresponding tune. When players illuminate all of the Musical Notes and claim the final reward chest, the complete musical score can be played. 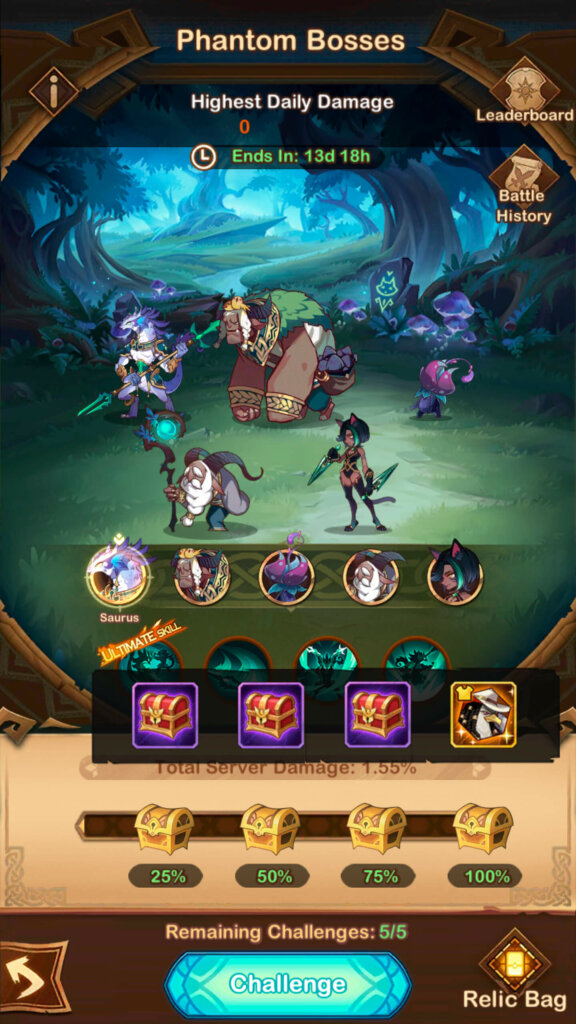 During this event, players need to do different types of battles to collect rewards. New battles and rewards get unlocked every day.

Acorns after these battles, which can be exchanged for Relics to raid the Phantom Bosses. Players who deal the most damage to the boss will receive extra rewards.

For more details, please take a look at our The Forest Escapade guide.

During the Anniversary party, participate in the Voyage of Wonders: Roamers’ Rhapsody to obtain a lot of valuable rewards and read the interesting story between Rowan, Angelo, and their friends regarding the party! 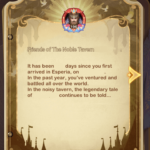 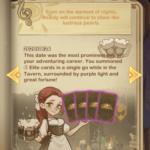 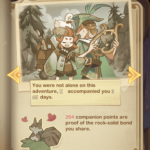 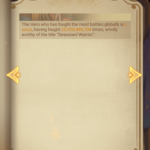 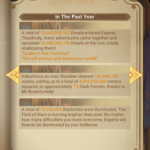 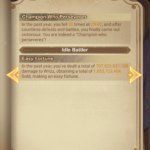 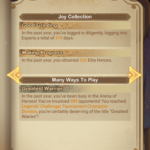 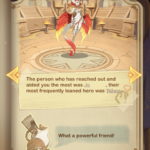 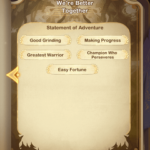 An interesting function that most players will enjoy! Here you can find all of the historical records you and the community have made since the beginning! 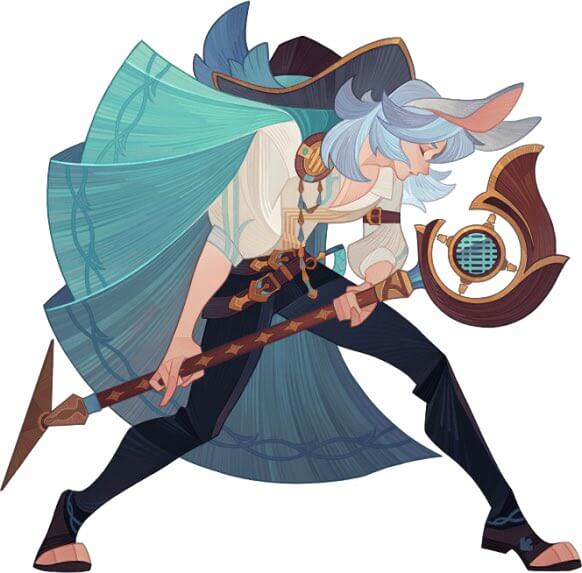 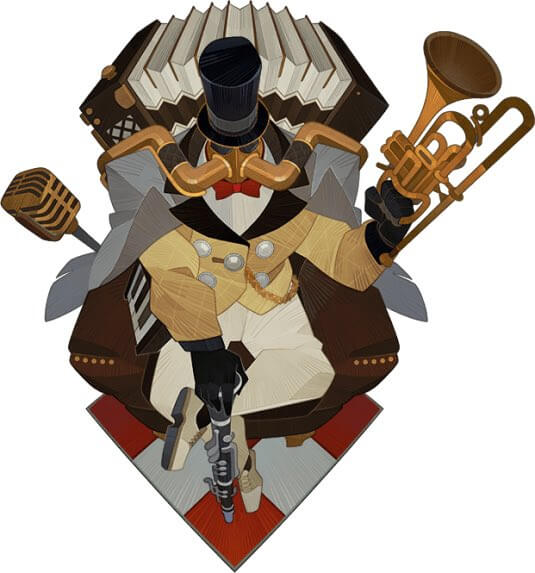 Below is something huge that will be released during the event.

You can check out the 1.36 Patch Notes page for more details, for now. Don’t forget to bookmark this page and come back later for more information regarding the event! 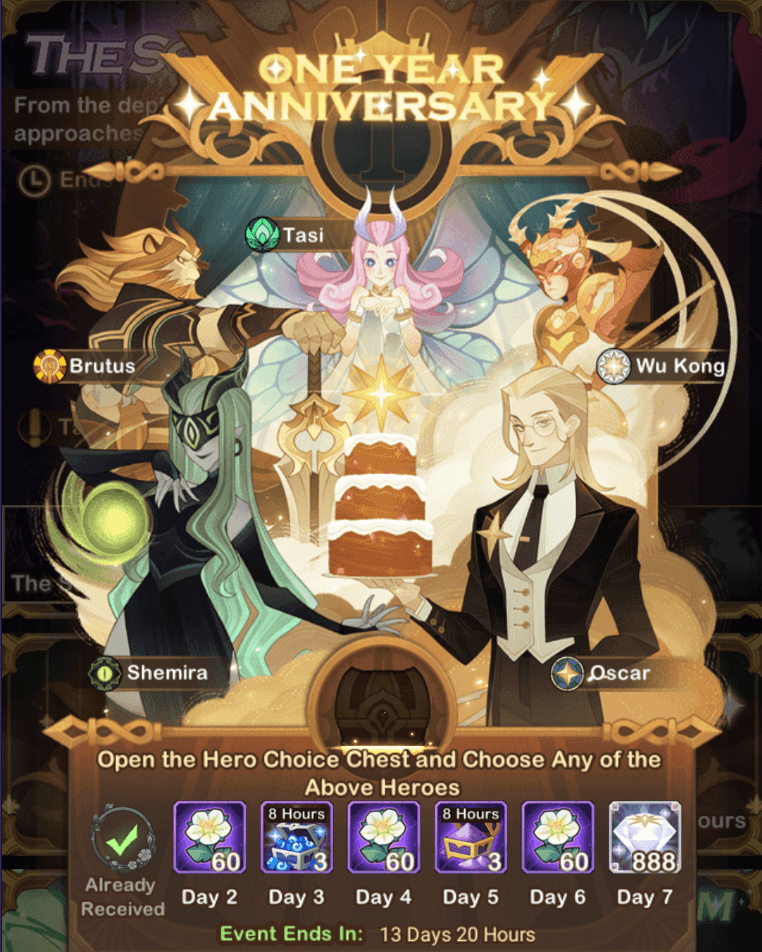 Login into the game every day and receive the rewards as shown below. Vibrant Blooms can be used to get various items (see more below).

After 7 days, you will be given the Hero Choice Chest which contains all of the Heroes below. You will be able to pick one of them.

So what are the best hero to pick out from the Hero Choice Chest? 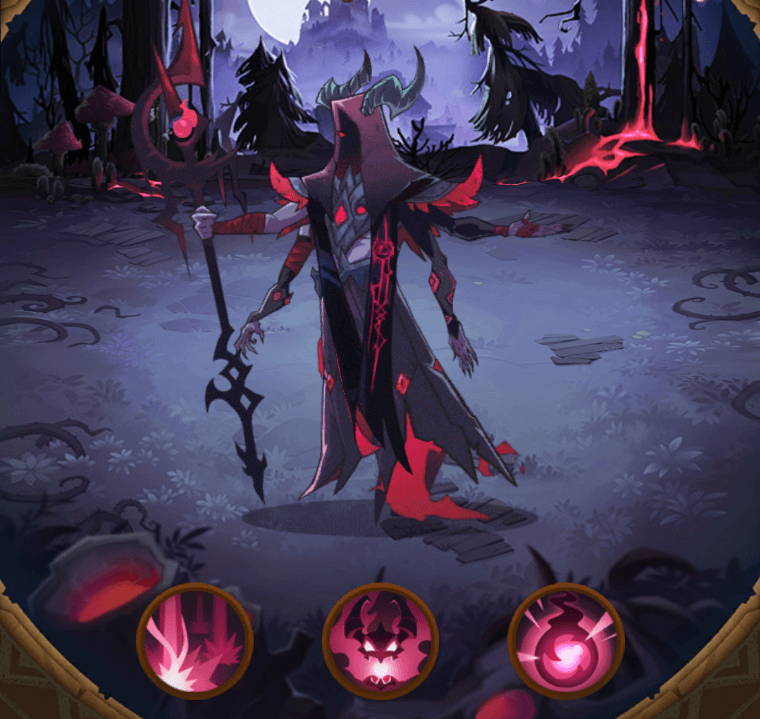 Defeat the Soul Reaver to get Vibrant Blooms.

Play around with his Soul Erosion skill is key. To do so, there are a few ways

Thousands of years ago, during the first Hypogean invasion, there lived a great mage named Azmonath. Though the peoples of Esperia were best by the depredations of the monstrous invader from every side and fought united, ferociously, against this otherworldly invader, there were a few among them whose allegiance wavered. Promises of power were offered to the strongest and brightest of the defenders in the world to come under a Hypogean victory. Such it was that Azmonath gave over his body, soul, and expertise to the demonic forces that sought to subjugate his homeland. In the end, Azmonath was vanquished by Esperia’s defenders as his masters were pushed back into their prison. He left nothing behind save a secret tome containing the dark knowledge he’d gained under their foul tutelage.

Several millennia later, on the very grounds were Azmonath had made his last desperate stand against the vengeful onslaught that claimed his life, a student by the name of Percival studied day and night in the Astral Academy. As with many of the higher arts, the study of magic and the academy itself was dominated by noblemen and the heirs to great fortunes. This was the one thing that set Percival apart from his fellow scholars. He was born neither to a noble house nor to a wealthy merchant family. His placement in the academy had been secured by a burning desire to uncover the secrets of magic and an unrelenting will that supplemented his inborn talents. Due solely to his humble origins, every step forward was accompanied by no shortage of struggle.

Unable to pay the staggering tuitions at the academy, he agreed to assist the institution’s librarians in their constant organization and recategorizing of the innumerable tomes in their collection. He took on these duties happily, savoring the chance to be among the wealth of knowledge afforded by the academy’s library. It was while dragging up bundles of ancient works from the deepest of the library’s depositories that he came across something which he’d never before heard referenced. Between a book of common potions and an antiquated bestiary was a thick, dusty tome with the title The Whisperings of Azmonath, Seer of the Underworld Ascendant.

He felt the power that lurked within its pages as soon as he laid eyes on it, and never suspected while tucking it secretly into his satchel that it could be the book that found him rather than the other way around. Whenever he found a spare moment, he would lock himself into his cell and pore over the strange scrawling spread over the yellowed parchment. Night after night, his understanding of the arcane increased exponentially. The writings and glyphs seemed to speak directly to him, revealing their meanings readily under his hungry gaze.

Outside his cell, his already strained relationship with his peers grew more tense. Where once he was fearful and timid in the face of the regular torment he received from the privileged pupils surrounding him, he began to behave arrogantly. The resentment he felt toward the other students began to color their every interaction. Who were they to condescend to him? If they had an inkling of the progress he was making in secret, they would change their tune. He longed to show them their place.

It was the son of a shipping magnate, Goddard, who became the unfortunate recipient of Percival’s wrath. Goddard was one of Percival’s most hated enemies at the academy. Derisive and sadistic, the boy had found a fair bit of sport in making Percival suffer. Peasants had no business in the ancient arts of magic, and he would make sure his lowborn classmate was regularly reminded of this. It was during one of their many altercations that Percival would reveal his true power. With a bloodied nose, amid a volley of insults and threats, Percival struck down Goddard with a curse. The incantations had seemed to jump straight from his memory of the Whisperings to his lips of their own accord, but still he felt a perverse glee at watching the withered husk that had once been his classmate fall to the ground smoldering and lifeless. The murder would usually have been answered by a sentencing worse than death, but the academy’s rectors found the cell of their young charge devoid of life. The only things left in his cell was his copy of the Whisperings and scattered papers covered in vile incantations. They tracked the wavering light of his soul to the libraries, but something in his presence was amiss. A darker energy than that of a common murderer was subsuming all that Percival had once been. When they arrived at the library from wherein the auras were emanating, they found not their familiar student, but a figure of swirling malevolence. Azmonath’s spirit, formerly bound in its tome, had found a new home in the body of the young man who had once desired nothing more than knowledge and perhaps a modicum of respect.

Knowing that there was no hope at retrieving their bright and promising pupil, the mages of the academy launched a desperate magical assault on the entity. They would become the next victims of Azmonath returned, their essences harvested to fuel his mad arcana. The time of reaving had come again.

“Your life is a small price for my power” 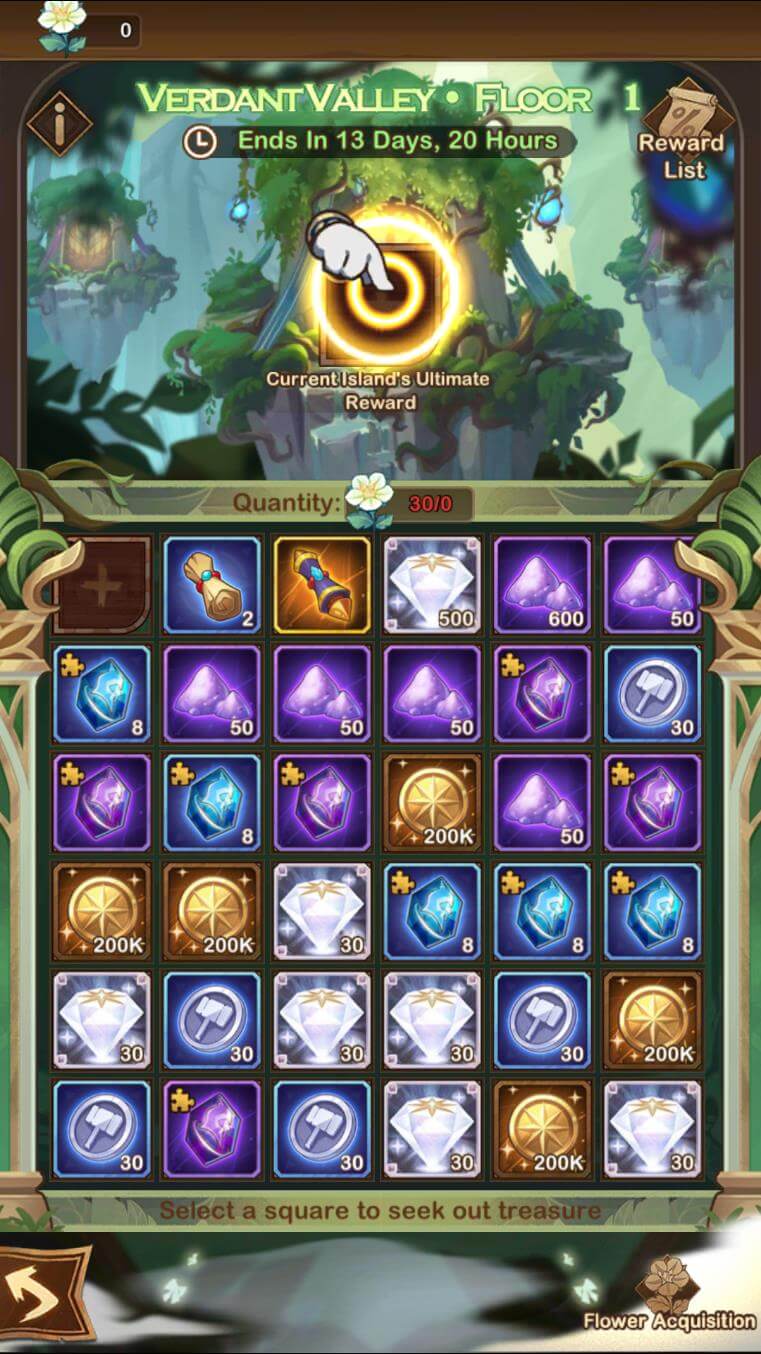 How to get lowers? 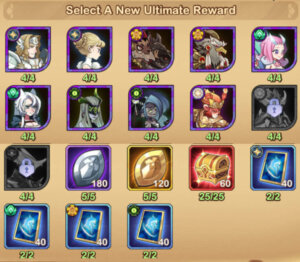 5. Players can pick the Ultimate Rewards from one of the above lists.

What are the best Rewards to pick? 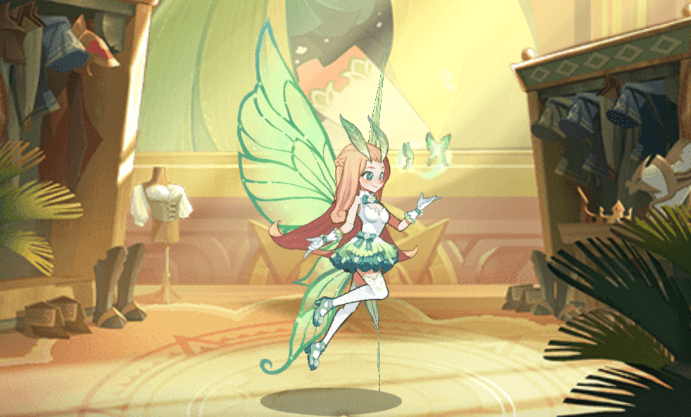 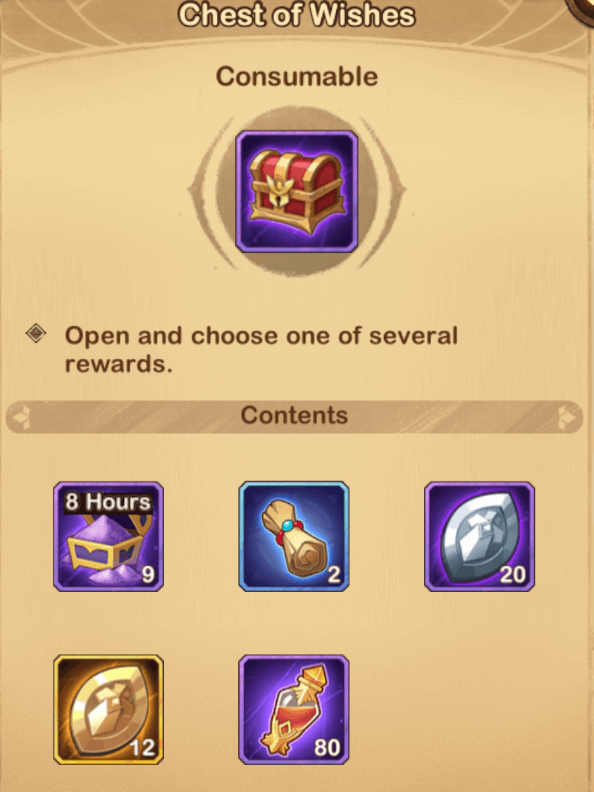 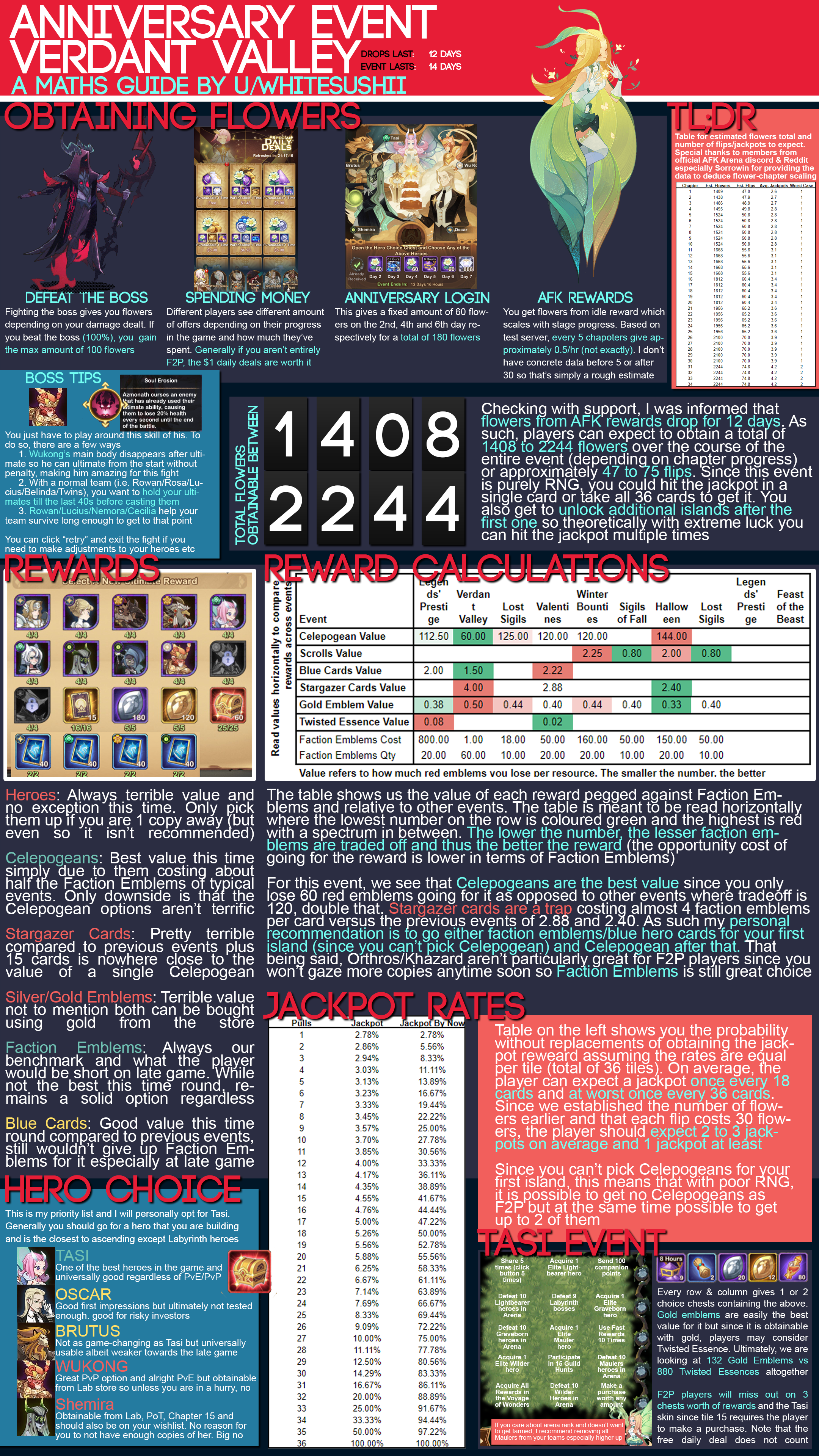