Firstly, If these are not the AFK Arena hacks most of you are looking for, I am sorry.

There are absolutely no diamond hacks or gold hacks in AFK Arena and any other online games, they are just trying to fool you. If there are, why would they share them for free in the first place?

These are actually some of the best tips and hidden information that most of the new players would find it helpful!

Whenever you defeat the boss of each floor, there is a chance of getting a chest that contains either

You can actually increase the chance of getting this chest by not collecting your AFK Campaign chest for more than 12 hours, not doing any daily mission, and not collecting the Fast Rewards before you actually attacking the Arcane Labyrinth Boss. 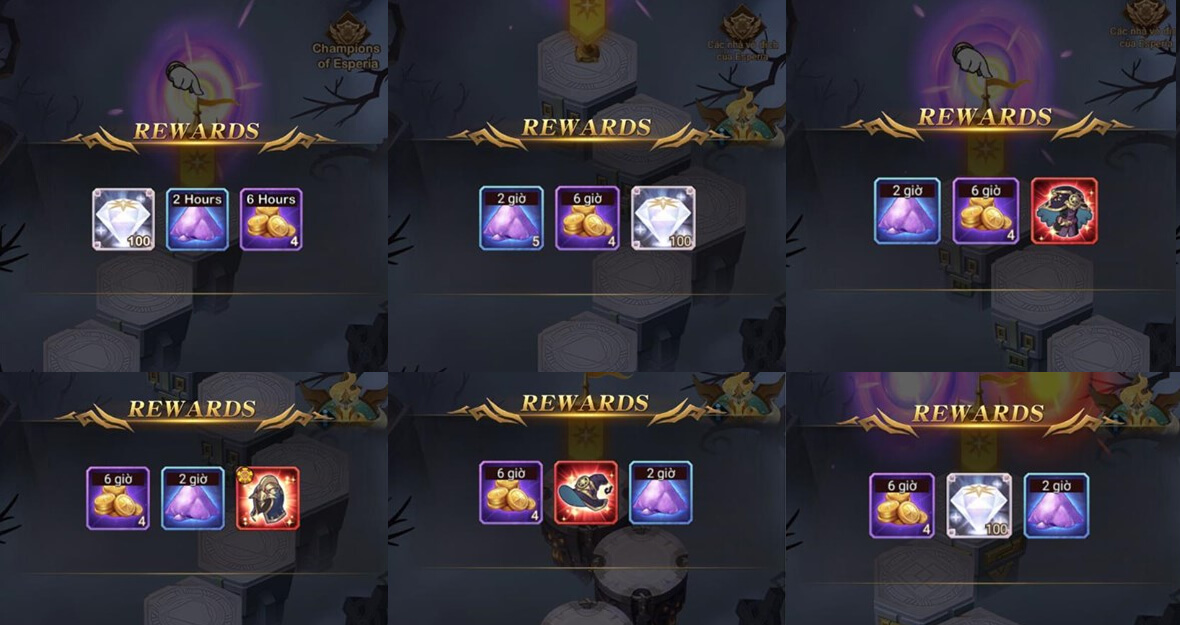 At the moment, you usually receive 500x

If you are in the early-mid game and you have a great carry in your teams such as Saveas or Shemira, you should spend all of your resources on them before working on the other heroes.

This trick works best when you have 2 Heroes in your team whose levels are 20-30 higher than the others. Simply follow the steps below to get the idea of the trick.

Improve The Gears of Mercenaries

You can actually improve the gears of the rented mercenaries in the game! This trick works when the hired Heroes only have less than 2 Mythic items! 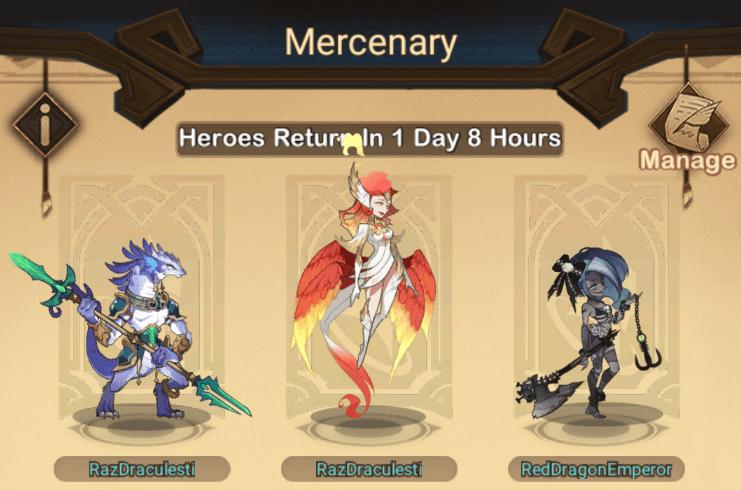 If the gears of the rented heroes do not change after you follow the steps above:

Do not underrate this trick! It is super useful if you usually rent Heroes from your friends!

Get Extra Resources for New Players

Most new players don’t know this, but you can actually visit other player’s Oak Inns and collect gifts from their hotels.

To do this, you need to add players who are at high levels and have Oak Inn enabled. Every day, you can collect 3 Red Boxes. Each chest gives you either 100

How New Players can defeat Voyage of Wonders with Ease

Undoubtedly, it’s quite hard to defeat the Voyage of Wonders as a beginner at map 6 when you still don’t have a decent team formation yet.

Here is a special AFK Arena hack that helps you to defeat it as easy as ABC.

While the signature items of the normal factions can only get to level 30, Celestial/Hypogean signature items can get up to level 40. These extra levels come with the addition stats, however, there will be no extra special ability.

Also, it is impossible to tell if a hero is using a +30 or +40 signature item or not by just watching their icons.

The more money you spend in the game, the more deals you will get in the Store.

In the screenshot below, the left side is a paid player’s screen, the right side is a free-to-player screen.

Players can actually get to VIP level 20 instead of VIP level 15 as shown in-game.

The table below shows you the full benefits of being VIP level 16-20 in AFK Arena.

There are a lot of offers in the game store with various price/rewards values so Whitesushii has created a wonderful sheet below for you to easily compare the different offers in AFK Arena.

Do note that the main focus here is Heroes, not Emblems.

Do Battles Against Friends

You can have at max 30 friends in the game, but you can only receive

Companion Points from max 20 players every day. Having friends not logging in for a few days doesn’t give you too much loss.

In addition, there is a lesser-known feature of the Friends system. It is you can actually fight against your friends for testing purposes.

There is actually a test server allowing you to have the earlier access to new game contents and to help the developers test out new features.

Head over to our Test Server page for more details.

There are also other official servers of the game that you don’t know about, including Korean version and Chinese versions.

There are some interesting tweaks you can use in the game by clicking at your game avatar and go to the Settings section. 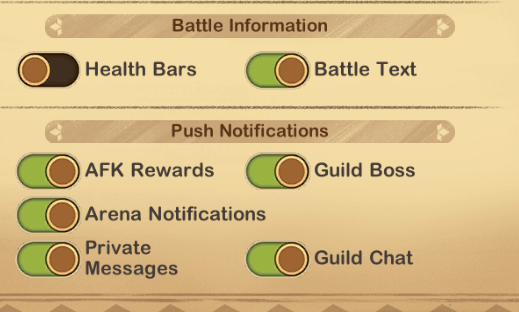 In this same section, you will find a way to enter the game redemption codes and receive some special gifts from the developers.

Follow our AFK Arena Codes page to get those codes as soon as possible.

You can actually change the chat channels in-game by going to your Profile → Language Channels and pick the lowest number channel or the green ones.

However, If you hate the quite and want to eat some drama after finishing all of your daily quests in just 2 minutes, go to the red channels. Not many players know this AFK Arena Hack. 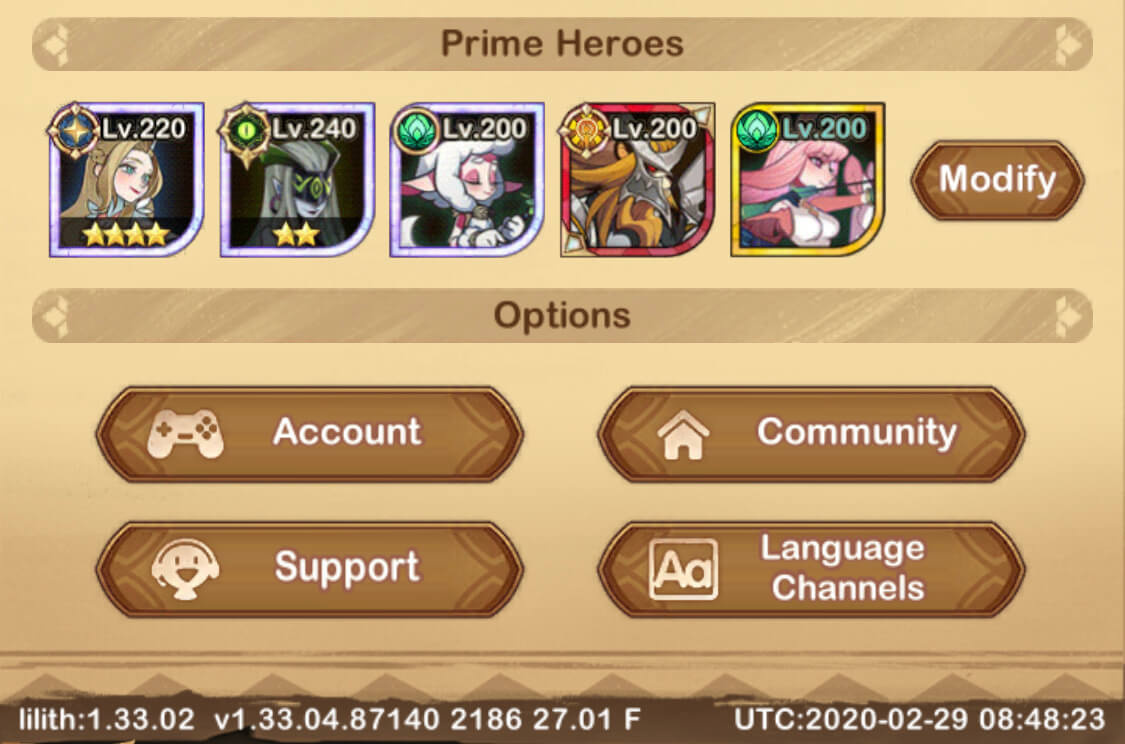 You can actually check the server time with ease at the account profile menu.

The server timezone is UTC +0. Daily activities reset at UTC 00:00

The game has some faction counters, which is similar to Pokemon and many other teams building video games. You can easily check it out by going to the team building section before a battle then click at the “i” icon at the bottom left. 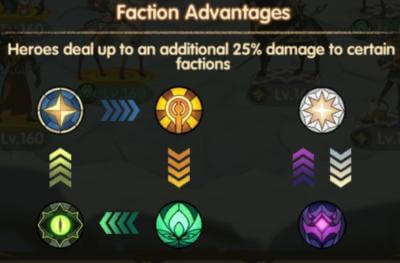 Having plenty of Heroes coming from the same faction gives you some great stats boosts during the battle. More details can be seen in the screenshot below.

If you are trying to re-roll your game to have a better starting Heroes, you don’t have to create another account, redownload the game nor clear the game data. Simply go to the Settings and pick a different server and use the AFK Arena redemption codes to test your luck again.

That being said, If you want to focus on a specific server and get to the top of it, usually the latest server, it’s better to clear the game data.

If you are looking for a tier list, head over to our AFK Arena Tier List page.

However, please note that this game is not about having a fixed team of 5 Heroes. You will have to change your team a lots due to the game meta changing and specific enemy formations.

In addition, later on, you want to focus on at least 1 Hero from each faction for the Faction Tower (unlocked later in the game via the King’s Tower).

There are about 30 top Heroes you want to have at the end of the game (for now).

Also, you can test new Heroes by going to each Hero Portrait and press the Test button at the bottom. The game will summon that specific hero and some common enemies into a battle. This isn’t a perfect system, however, it is enough to give you the rough idea of the hero skills.

Check the time you have defeated Arcane Labyrinth

Hopefully, you have found some interesting tips in the article, new players. And remember, there is no working AFK Arena Hack out there. If there is, why people would share it for free in the first place?