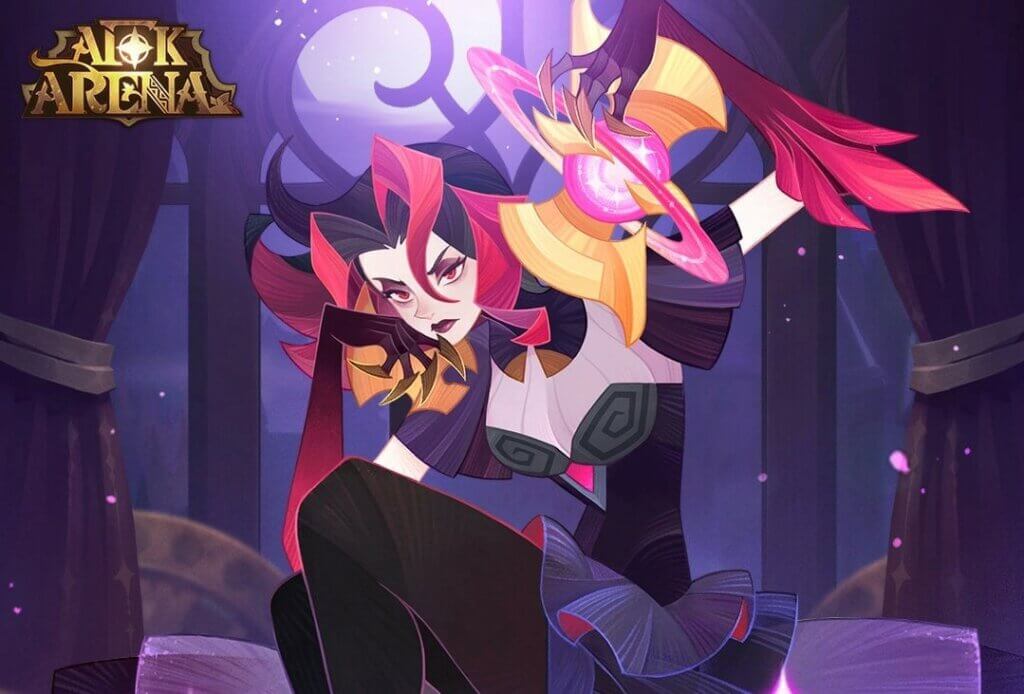 Scarlet unleashes dark energy onto the battlefield, resulting in up to 12 attacks. Each attack strikes a random enemy target for 190% damage.

Struck enemies are cursed with 1 layer of Dark Miasma, which lasts for 5 seconds, and can be stacked up to 5 times. This skill has a 20% chance to strike allied targets, but will not curse them with Dark Miasma.

If an enemy target is cursed by 5 layers of Dark Miasma, they enter a state of Shaded Corruption, causing them to be unable to move or use skills while corrupted.

Each time any target on the battlefield has lower than 15% health, a Dark Aura is manifested underneath the most densely concentrated area of enemies, after which the target is teleported into the center of the Dark Aura and blown up.

The target and all enemies within the Dark Aura are dealt damage equal to 8 20% of Scarlet’s Attack Rating. This effect can only be triggered once every 20 seconds.

Residual dark energy surrounds enemies who are struck by Scarlet’s Ultimate skill, which randomly explodes within a span of 8 seconds. Enemies within range of the explosion are dealt damage equal to 150% of Scarlet’s Attack Rating.

3/9 Ability: Every time Scarlet uses her Ultimate skill permanently increases its damage by 50% of Scarlet’s Attack Rating the following times it’s used, up until it reaches 250%.

E30: Enhance the skill Arcane Absorption, Leeching health from an allied target dispels the majority of debuff effects they are currently afflicted by. Each time Scarlet successfully dispels an ally’s debuff effects, she recovers an additional 60 Energy points.

E60: Enhance the skill Dark Aura, Enemies struck by this skill have their Energy Recovery reduced by 70% for 10 seconds.

Scarlet still remembers that day, being torn away from her mother and left in an orphanage.
Crazed and delirious, her mother kept repeating herself, over and over. Her voice was filled with hysterical panic, one moment asking “don’t you hear that, sweetheart?” and the next angrily berating Scarlet, “You lying brat! How can you not hear those noises?!”
“I don’t hear anything, mother. Nothing at all.” No matter how insistently her mother pressed, Scarlet remained tight-lipped and took the abuse.
Gradually, with Scarlet’s repeated…

reassurances, her mother’s frenzy calmed. For a brief moment, she was lucid.
“You’ve done well, Scarlet.” She leaned down, her fiery red locks falling forward. The very same flaming hair that was a symbol of Scarlet’s matriarchal curse.
With a love in her eyes, she gently stroked Scarlet’s face, a tiny self-satisfied smile creasing her lips. Perhaps she could see the power within Scarlet to break this awful inheritance…
Before she had succumbed to insanity, it had been her sincerest wish to see Scarlet raised as a true Lady. A Lady as graceful and virtuous as her own mother had been, Scarlet’s grandmother, the finest opera singer in all Kuilin City. I
Alas, at age just six years old, Scarlet dashed her mother’s dreams of such a path. Tearing up her suffocating corsets and disrespecting the rules of her elders, she eschewed it all. I

Once her mother was safely locked away in the confines of the asylum, Scarlet was taken in by the Violet Orphanage.
Duchess Georgiana is famed for her philanthropy and acts of charity. She sponsors the efforts of the Violet Orphanage, citing it to be a fine and reputable institution.
Just one night after her arrival, Scarlet was already planning her escape. Something seemed amiss here. The superficial care ladies, the bizarre mealtime prayers offering worship to the Duchess, and those weird… “tests”.
Her most successful escape attempt was to a little town one hundred miles away from the orphanage. She was caught and returned to the facility, along with her recently assigned roommate. Assigned to her by a care lady as part of a “test”, the girl was known only as Number 095 and could supposedly interact with the wandering spirits of the deceased.
Scarlet is Number 063. Word of Number 063’s escapades reached the ears of the Duchess. The repeated escape attempts from her charitable establishment irritated her, after all, she is trying her utmost to be a paragon of generosity in her senior years.
A care lady took Scarlet away and threw her into a “test”, raising the intensity of the process to several hundred times that of the previous tests. Her will was diminished as something connected with her mind. Her consciousness fading, the sound of sinister, acrid whispers finally reached her.

Scarlet found herself stood in pitch black upon a stone bridge choked with purple vines.
Lurking amongst the vines were unsettling shadows that gathered together to become a pack of terrible monsters. Though their features were unclear and their faces seemingly a blur, Scarlet could feel them prying into her mind, their eyes boring into her, searching out her thoughts… and fears. Just as she was about to be ensnared by the frightening creatures, a soft voice called from the other end of the bridge.
“Scarlet.” A familiar voice… Her mother.
Her mother stood quietly opposite her, staring at her daughter.
The very same moment her mother appeared, the monsters clinging to Scarlet s arms and legs fled in an instantaneous exodus.
Scarlet ran to her mother. Her mother ‘s eyes were clear and alert, and her vibrant red hair was pulled back into a tidy coiffure. This was not the bedraggled crazy women of recent, but Scarlet’s mother from her childhood, before she turned six years old.
Straightening up her daughter’s jacket, she then took Scarlet’s hand and spoke, “Scarlet Laurence. That is your name, and also your grandmother’s name.”
“This curse of madness has clung to the women of this family like a terrible miasma, neither dispellable nor alleviable.

We are special, sensitive to certain things, rather like a medium…
Those vile creatures will not let us rest, constantly pestering us with their noise. There are great evils, grotesque ancient spirits that lurk in whispers, trying to corrupt your soul and strip you of your sanity.
Your grandmother took her own life during a performance, unable to tell reality from fantasy. I became overwhelmed by the shadows and chaos, chipping away at my sanity, it dragged me into a hopeless delusion, much as you just experienced here. It drove me totally insane. But that darkness is a power we possess, it flows through our veins, bringing us both pain and incredible strength.
I have always believed you to be capable of discerning reality from fantasy.
Farewell, my dear daughter Scarlet. I am going to join my mother now.”
Scarlet’s mother let go of her hand and took a step back. Scarlet frantically clawed at the space before her, trying to touch her mother but instead finding her hands passing through the silhouette, as if she were a ghost. Letting out a loud cry, her mother’s body erupted into a cloud of countless fireflies, spreading throughout the pitch blackness to disperse the darkness that enveloped the bridge and Scarlet.

“Mother!” “Motheeeeer!!”
“Are you okay? 0,063?” A whiny moquitoesque voice buzzed in Scarlet’s ear.
Scarlet awoke from the hallucination.
Standing in front of her was her roommate, Number 095. For some unknown reason, she had an unfamiliar girl with her. Number 095 hurried to explain herself, “ S-She’s my sister, Silvina. You’ve been out cold since you were brought back, I thought maybe, maybe…” Silvina piped up, urging her sister, “ Well she’s fine, so we need to go.”
Silvina opened the window and yanked her sister up after her.
Before vanishing through the window, Isabella turned to Scarlet, “063… I used to always see this red-haired spirit with you, but since you were brought back… she’s gone.”

Deep into the night, the Violet Orphanage is blanketed by quiet.
Under cover of darkness, two little girls, hands locked together tight, flee desperately into the night.
“Well well, how many naughty bunnies do we have here tonight, then?” A burly guard, iron baton in hand, blocks the girls’ way forward.
Pointing his baton at Silvina as her sister cowers behind her, he counts, “One.”
“Two.” He nods his head mockingly at Isabella, her body shaking uncontrollably as she tries to hide behind her sister.
As the two parties stood in confrontation, neither noticed Scarlet calmly stroll down a different path. Catching sight of Scarlet, the guard clenched his teeth with anger, knowing well this old nemesis who has escaped his vigilance so many times before. “Three!”
“Why hello there, my old buddy gate-watcher. I received a gift from the Duchess, so… I have something I wish to give her in return!”
“Number 095’s big sister, please take her away. She cries every day, from dawn’ til dusk, it’s driving me nuts. Oh, right, ”Scarlet turned to Isabella, “Wimpy Number 095, I’m Number 063, Scarlet.”
Just as Isabella was dragged away from the scene by her big sister, the sound of a commotion was heard from behind them as more guards assembled.
Unable to contain her curiosity, Isabella turned to look back, and what she witnessed would stay with her for the rest of life.
Around Number 063, a searing purple-red flame was burning outwards, engulfing all in its path, as a furious torrent of black turbulence surged from her body. The colliding elements created a cacophonous racket as the sky seemed to shake and a dragon formed of flame and cloud engulfed the entire orphanage with one thunderous roar.
“At the time, Scarlet was like a queen that had taken center stage. But that expression on her face, that smile… there was a flicker of insanity.”