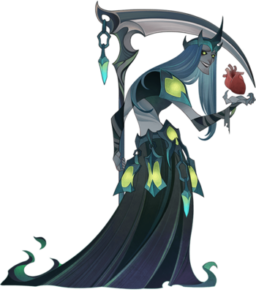 Niru starts off weaker than most, but absorbs the strength of fallen enemies and allies alike to grow into an unstoppable juggernaut if left alone.

► Position Niru at 2 with a tank at position 5. This makes Niru survive for a longer time in the battlefield because he will only be targetted by the enemy tank at this position. Their position 5 dmg dealer will target your pos 5 tank making that dmg dealer not attack Niru until your tank is down. Niru will suffer from getting hit by CC more as he is faced against the enemy tank but with his healing, he will create a trade by having your tank survive longer to tank damage for him. His death will also only serve to heal Niru, negating most dmg he’d take from the enemy tank.
► Due to Niru’s 2nd skill (Life Leech) and 3rd skill (Soul Reaper), his position is being frontline as a tank despite him being an intelligence-based hero.
► Niru’s 2nd skill (Life Leech) can heal himself and nearby allies, making him the only Graveborn who can heal teammates.
► After 101, Niru’s 3rd skill (Soul Reaper) increases his attack and defense by 15% of any other hero who dies. This attack increase scales very well with his ultimate, making it increasingly effective as more heroes die, whether they be allies or enemies.
► Niru functions best as a tank when your team can kill enemies quickly, due to his 3rd skill healing him when other heroes die.
► Starting from level 61, Niru’s ultimate will target the enemy with the lowest hp. This will be overkill when said enemy has very low hp. It is advised to manually activate his ult to maximize his potential.
► Labyrinth is Niru’s best mode due to him being able to heal and aquire durability from enemy and allied deaths, making him a Tank that does not need any healing from any support. His ability to gain durability off any heroes deaths also makes him a powerful sweeper in a mode where allies will be dying early at difficult stages, allowing Niru to power up and get healed early as well.

►When Playing Niru in Guild Hunts, equip the Artifact, Dura’s Call to grant Niru the ability to perform the Double Ult Strategy.