Isle of Gold is the new interesting monopoly-like game mode in AFK Arena where players need to roll the dice to build up their own base (island), upgrade buildings, and attack other players!

Below is an example defensive base for everyone. Designing your own to enjoy the game even more!

Or If you don’t have Ainz comp, or you just are not able to defend against almost all attacks, use the following setup. It’s not a joke if it works (but boring)

1. General strategy is to upgrade attack towers for percent bonus for damage to guarantee your victories in the battles. You can just ignore defense (it will even be beneficial for you to be attacked, see point 9).

2. IMPORTANT: Try to find an ally for yourself in the early days among those you attack. If you see a person with an island of flowers, then feel free to write to him, and agree to take turns attacking each other every day through the “revenge” function. So you can attack each other 2-3 times a day and save a lot of nerves and resources. Remember, for attacking an empty island, you will receive 300 diamonds (and 3 more types of resources). When you are pillaged back, you will lose only 11 diamonds.

As alternative, you may jump between the stones and take the risk of being left empty-handed!

At the start, you will get 30 dice rolls (in fact, more, due to the possibility of getting into the stables). Our task at the start is to pump the fountain and flowers as much as possible, and then put 4 resource towers of the 1st level.

We start by putting a fountain and 3 different flowers (they should be maxed out if you come to them). If you hit an empty slot, we also add 3 energy towers – they will also help strengthen the fountain.

The MVP of this event is a fountain, it gives a huge bonus to resources from attacks. Ideally, it should be maxed out to lvl 30 in all possible ways and as quickly as possible. Also put all three flowers: firstly, they have very important abilities, and secondly, they give + to damage. The latter is very important because it will allow you to easily kill any enemy formation in the late game.

When you have 7-8 rolls left, it is worth start to set up the resource towers. It is optimal to put diamonds, poe, dust and lab coins. You don’t need to upgrade resource towers, even the first level is enough (that’s why we put them so late so that they don’t take random upgrades from workshops).

You also need to build and pump up to level 5, and then up to level 10, two or three energy towers. Their advantage is that they will allow you to upgrade the fountain at +6 or +9 levels, and at the same time increase the damage due to pumping flowers.

The rest of the building slots can be skipped. At the same time, you can add 2 more flowers to cover empty double-spaces. Bonus +attack from extra flowers stacks, so it’s worth it. Ideally, you should have (1 fountain + 3 different flowers + 3 energy towers + 2 flowers for additional attack + 4 resource towers lvl 1).

Before rolling the dice, move the buildings under the construction phase. This can be done shortly before you are given roll attempts. When you already have attempts, it will not be possible to rearrange.

You need to arrange the buildings so that the important buildings that you want to upgrade are one after the other with single free slot between them. So that at each outcome you upgrade something useful. The most valuable buildings (especially the fountain) should be placed in front of the stables or in front of the harbor. In this region you will spend the most time, so they will rise faster than others.

5. A long tap when throwing more often gives a large number of moves, and a short tap often gives few moves. Therefore, if you are 5+ cells away from a stable or harbor, throw a long tap, if you are 1-3 nearby, then throw a short one. Even if you don’t hit the harbor/stable, you will upgrade important buildings 2-3 times in front of or just behind it. The same approach should be used when rolling dice in an attack. This will increase your chances.

Below are the stats for the throw frequency that has been collected during the second Isle of Gold. 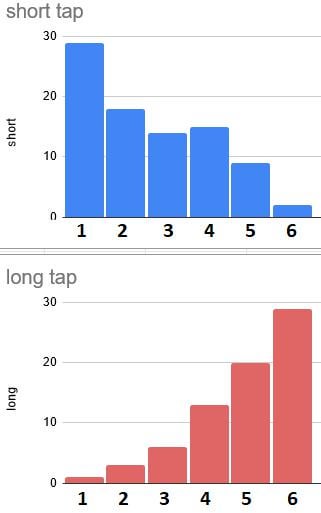 You may be attacked no more than 3-4 times per day, and you will lose 8-11 diamonds for this. Therefore, you should not worry about losses in defense at all, they are negligible. Therefore, all that can be done is to help those who come to visit you to calmly pick up the maximum rewards.

For this, you will receive a huge bonus to karma (and avoid curses on your head), or maybe you will find a player with whom you will exchange attacks on empty protective cells every day.

· Firstly, you can put no defense or easy defense (single hero) in the towers.

· You can put resource towers right around the harbor so that you don’t miss them.

· You can also put a purple tower in front of the resource towers so that the enemy doesn’t miss them for sure.

· Don’t take the global debuff with decrease of Morale for attacker.

· And you certainly don’t have to build thousands of purple, red and green stones all over the island.

7) Attack: Before the attack, it is necessary to prepare and set up. Energy towers should buff the fountain and flowers. If possible, you need to make the fountain +4 or even +6 when you get one (two) energy tower to level 10. When you fountain reach maximal upgrade +30, you should swap energy towers into the additional flowers of any color.

8) Choose an opponent: You have 5 chances to change your opponent. The choice should be made according to the criteria:

Life hack – you will be attacked mainly by those who also build attacking buildings. Therefore, it is usually very pleasant to attack them. Therefore, if you have spent all reset attempts, and there are still attacks left, then you can go to the journal and attack those who beat you.

An important detail: if you attack through the “revenge” button, you can see the enemy’s defense and go back without wasting an attempt!!! (with a normal attack – if you enter, you will not exit). Therefore, the resource of good opportunities to take revenge is very important.

Ideally, it should be saved up at the end, so that in the last days there will be a choice of convenient islands for attack. Opportunities for revenge do not burn out. You can attack the one who beat you on the first day at the very end.

Therefore, when you are beaten – it’s even good. You will lose only 8-11 diamonds, but you will get a chance to attack suitable enemy and knock out a full 300 from him, and not go into the swamp to lovers of a defensive strategy. A typical win-win interaction from game theory (in biology this is called symbiosis).

9) Spend attacks every day. If you haven’t used up old attacks before the server refresh at 00:00 UTC, you won’t get +2 guaranteed attacks per day.

On the first day, the meta is almost the same as the usual. But closer to the end the Isle of Gold has a very specific meta where you get a 100-200% damage buff from flowers, and your opponent also gets a damage buff from stones. Therefore, the effect of the glass-cannon works here, and the heroes die from the single punch. So the burst meta is coming: A-Thane, Athalia and so on. Also invulnerable heroes like A-Brutus or Alna will be nice.

The Isle of Gold event will run for a total of 14 days. Players can build upon their islands and reap an abundance of resources.

Players can roll dice to move across their islands.

After rolling the dice, players can walk the corresponding number of steps shown on the dice, and build or upgrade structures on 2 nearby tiles. For the full list of buildings, please take a look at the next section!

In the starting, each player has 30 initial dice rolls.

Players shall receive 6 dice rolls every 12 hours, but no more than a total of 30 dice rolls can be accumulated.

Players may construct up to 4 Resource buildings, from which they can obtain the resources they want.

Players may construct up to 14 Defensive buildings to help defend against other players pillaging their island. The defensive buildings can only cover any resource building within 3 types, so it is recommended to mix them up so that any all buildings are covered.

Building upon the island provides Island Experience, which can be used to raise the island’s Island Level, unlocking the corresponding reward in the process.

Functional Buildings cannot be upgraded; however, special rewards can be acquired from these buildings when a player lands upon them.

If your buildings get destroyed, it will take time to rebuild and start generating resources again (about 1 hour).

Press the Pillage button to search for other players, and then you can attack them. The max cap is 3 attacks, but you can gain 1 more chance to attack by going to the building Shipyard of your base.

You have 5 chances to refresh the target. If you want to attack the found island, simply press Pillage to start raiding it.

You will be placed on a random tile at first. Then you can roll the dice 6 times.

After moving, you will be able to target 2 nearby buildings.

Whenever you go to an un-garrisoned building, you can just collect the loot it has. If it is garrisoned, you must attack the camp to get the loot, or you can skip it and roll the dice again.

Whenever you walk to a defensive building, it will trigger its effects.

The more Morale points you have, the more rewards you can get from pillaging. It also gives you some special buffs:

After 6 rolls, the raid ends.

1. Resource buildings produce resources every hour. The quantity of resources produced by the building is determined by the player’s campaign progression at the time of unlocking the Isle of Gold event.

Note: Upgrading resource buildings doesn’t increase their production speed, but increases the additional resource yield by 7% per level for a successful defence (capped at 100%).

3. Stones have the ability to curse enemies when stepped upon, weakening their pillaging efforts.

4. Flowers have no defensive properties, but will increase the player’s own heroes’ Combat Ratings while they are pillaging other player’s islands.

The log shows the battle logs of the battles that you raided.

It also shows the logs of your base getting raided. From there, you can easily choose to avenge the enemies.