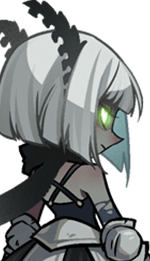 Silvina is an assassin in the purest sense, infiltrating enemy ranks to target the weakest enemy from the beginning, with the tools to take them out.

► Silvina’s 2nd skill (Abyssal Shield) at level 81 provides her ability to kill her target faster, while being immune to cc with her shield. At level 81, she gains attack speed while the ability is active, which helps her gain energy faster as well.
► Her 3rd skill (First Blood) is a game changer, especially after level 101. At the start of battle, she immediately teleports behind the enemy mage with lowest defence. This is especially useful against mages with non-global AoE abilities as Silvina will make it so that these abilities only hit her instead of potentially devastating a few of her allies at once instead.
► Silvina can also be really good against Nemora, as Nemora’s low damage makes it hard to break Silvina’s shield, and the shield can also absorb and negate Nemora’s 2nd skill (Beguile). However, if Silvina’s damage is not high enough, or she lacks assistance from her team, she could potentially give Nemora a faster ultimate instead, which is detrimental instead.
► Starting from level 61, Silvina’s ultimate will always target the enemy with the highest energy and teleport to said target while doing damage, which may interrupt her from finishing off her previous enemy.

► Back Turn with 3rd skill (First Blood) and ultimate. Will teleport behind Soren at the beginning of the battle. Turn off auto for best results, as she will likely get charmed at some point, and due to her short attack range, Silvina will walk up to attack one of your frontliners while charmed. This will cause Soren to turn around to face your team again, but her ultimate should be available to make her teleport behind him again and cause him to turn back around before he uses the next charm.