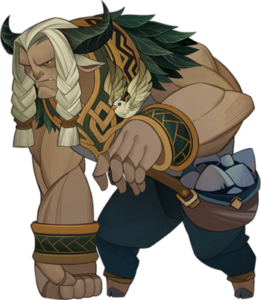 Ogi is a hyper control oriented tank who relies on having specific damage dealers who can take advantage of his unique strategies to quickly gain an advantage.

► Ogi’s Strength comes from his ability to displace an enemy on his 3rd attack due to his toss being a basic ability. Taking advantage of this early toss is key to Ogi’s success. However in exchange for this powerful early displacement, Ogi is the most fragile tank due to his durability being locked behind his ult.

► Strong at Mid to End-Mid Game:Ogi behins to shine once the player is past Chapter 6 as from Chapter 7 onwards, it will be a long time until the next Mauler Chapter so Ogi will be facing alot less Saveas from this point on. Around the end of Chapter 6 is also around the time when the player is slightly past lvl 81 so by this time, Ogi will have unlocked his strongest upgrade which allows him to stun lock the enemy frontline for 3 whole seconds. This upgrade makes Ogi an extremely an extremely powerful frontline against the upcoming Graveborn Chapters (8-11). Though Ogi highly suffers early game due to the 2 consecutive mauler chapters, he also comes online at the same time as the Graveborn chapters, perfectly ready to take damage and provide powerful Stuns.

► Very Strong Against Graveborn: Ogi is extremely powerful against most Graveborn heroes due to his 2nd Skill – Ground Fissure which stuns enemies in a very wide AoE. This ensures that Ogi interrupts both Shimera’s laster attack and Isabella’s Energy Drain ability, hidering both heroes’ damage output extremely well. Ogi’s toss also ensures that he steps even more forward to make sure the 2nd Ground Fissure stunss them for an even longer time. Against Vedan, Ogi also provides a long 3 second stun combo with his skill 2 and 3, reducing the speed by which he can generate energy. A vs Silvina strategy is also mentioned below. However, the incoming Mauler Chapter, Ancient Ruins(Chapter 9) will be a tough wall to break as Ogi is very weak against Saveas; despite him being able to hard counter Brutus, he struggles alot against Saveas’ damage output. However, once Chapter 9 Passes, Ogi is back to being an amazing Tank!

► Position 2 is Ogi’s ideal location. This is because at this position, only the enemy backline Pos 5 will be attacking him. Pos 3 and 4 backline enemies will attack your Pos 1 tank. With Ogi’s weaker initial durability, taking advantage of the enemy AI’s targetting is key to Ogi’s success as a tank and will help him survive till he gets his ultimate.

► Ogi’s Throw(Skill 3) is Ogi’s greatest strength and your team’s strategy should be focused around it if you are running an Ogi on your Team. The throw singlehandedly gives Ogi 3 strategies he can play that changes depending on Ogi’s position in the battlefield:

►►Assassinate Enemy Pos 5 – Pos 2 Ogi, Pos 5 DpS(Saveas Best). As soon as Ogi will use his throw, Dps will change target to the enemy Position 5, this will quickly kill a high priority Pos 5 target. Pos 5 is a very defensive position that Ogi essentially negates unless the enemy tank has displacement as well. Requires Ogi to have high Movement Speed. Without it, Ogi will not run far enough and enemy tank will walk forward, maintaining target priority. This makes Ogi very weak without good boots. Strategy is guaranteed once Ogi gets purple boots.

►► Assassinate Enemy Pos 1 – Pos 1 Ogi, Pos 3 Dps. A riskier version of the first strategy. Basically the same idea but Ogi will be taking damage from 2 enemy backline now instead of 1. Highly not ideal but viable when you have a defensive team to protect Ogi and a strong DPS to assassinate a high priority Pos 1 target. You can also try an offensive Pos 4 to the mix but the risk just gets higher for you.

►► Weaken Enemy Pos 2,4,5 – Pos 2 Ogi, Pos 5 Targetted AoE(Belinda, Morvus, etc.) This is a more long term strategy that takes advantage of Ogi’s toss to whittle down the 3 bottom enemies while your top team gets to be more dynamic. The most flexible strategy Ogi has as it is the least 1 dimensional but also the least game winning. Its strength comes from Ogi amplifying your AoE damage which can pay off long term as your backline gets 2-4 AoE shots to 3 enemies. An advantage basic AoE heroes don’t usually get to enjoy from the start of the fight. Least flashy but deadly.

►► vs Silvina – Place Ogi infront of your ally that Silvina will attack. As soon as Ogi throws enemy tank, he will turn around to attack Silvina.

► Lvl 121+: Despite being a tank, Ogi deals the highest Guild Hunt Damage out of all Legendary Tanks in the game, making him a viable option in Guild Hunts if you need a damage dealer who can also tank damage for your team. Ogi’s damage is abe to rival most fragile damage dealers in the game, losing only to the top tier dedicated Guild Hunt damage Dealers, You can try to take advantage of his combination of damage and durability if you need one.