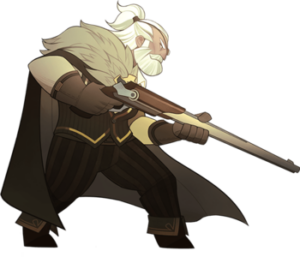 Morvus is an artillery type damage dealer who provides fire support with his high AoE DpS, stuns and the ability to snipe weak enemies.

Morvus’ greatest weakness is his average Guild Hunt DpS and being at a faction disadvantage against Soren. This is crucial as in the Early-Mid game, you would not have many heroes thus you would likely lack the hero to Switch Morvus out of against Soren. (Or the hero you switch with Morvus will have lower power than Morvus). This will put you at a disadvantage against other players who utilize heroes who are able to get high Guild Hunt scores as they can acquire more equipments and crystals from Soren.