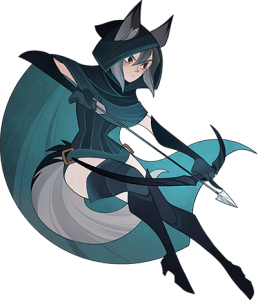 Ira – Rogue of the Forest

She is additionally the best Guild Hunt Damage Dealer in the game.

► Positioning: Ira must be placed at 3 or 5 to limit the spread of her ult. While her ultimate has global range, it highly prioritizes nearby enemies so positioning her at the corner will limit her Ult spread even more, allowing her to focus its dmg on nearby enemies.

► Frontline Dependent: All ultimate dependent heroes needs a good frontline but Ira needs it more for the same reason she needs good positioning. This is to limit the spread of her ult. If her enemies close in on her, her ult will spread more, making its lethality less reliable. Additionally, it can miss moving enemies so try to make sure your tanks dont die during Ira’s ultimate.

► Union Buff Dependent: Ira greatly needs full Union Buff to be considered an A Tier hero as before then, she is team dependent due to her low pre-ult dmg, wavering around D or B tier depending on the situation and her team composition. But the Union Buff Solves her low pre-ult dmg as she gains access to an RNG based burst, greatly leveraging her team dependence. Before The Union Buff, Brutus is almost necessary to make Ira work as a solo carry as she will have a hard time shredding the enemy frontline without Brutus providing damage at the same time. Another option is to play Belinda to grant Ira Crit Rate for a duration. Otherwise, if neither is available, it is better to play a Defensive Team and wait for Ira’s ultimate damage.

After the Union Buff, Ira is almost nearly support independent. Recmmended supports however are: Lyca and Estrilda for their Attack Speed and Energy Regen Buffs.

► Pre-Union Buff Battle Strategies: because Ira is not yet as strong before she gets the +15 Crit Rate buff, she needs specific strategies to work outside Guild Hunt. With these Strategies however, Ira can be a strong hero.

►► Aggressive Snowball:
Ideal Position: 3 || Best Allies: Brutus & Raine.
Employs Support heroes who specialize on assisting Ira to quickly kill the enemy frontlline infront of her. Quickly eliminating the frontline infront of Ira means her ultimate will have less targets, becoming more lethal. In this strategy, Raine is the best support as she provides Ira the ability to cast her ultimate 3-4 times in a single battle. However, Raine alone is not enough as Raine deals very low damage. Utilize Brutus to tank for Ira and provide additional damage to set up an early kill. Or Belinda to grant Ira crit rate for a short duration. Belinda’s weakness however is that she is a 3rd backline hero so you are either forced to play Support as frontline or no Support at all. When playing a support frontline, Khasos is a great option.

►► Defensive Snowball:
Ideal Position: 5 || Best Allies: Nemora, Tasi & Luscius
Employs a very defensive team that has a lot of Control, Durability and Healing for Ira to safely build up her energy. As long as the team survives, Ira will eventually get her ultimate and begin killing the enemies 2 by 2. And with every kill, Ira recovers 200 energy, quickly setting her up for the next cast of her ultimate skill. So long as the enemies do not break your Defense, victory is sealed. An advantage of Ira over Shemira is that Ira is a burst hero so once her ultimate is cast, a kill is almost always guaranteed and the kill is quick, amplifying your team’s durability with a few enemies dead, sooner than Shemira ever will.

►► Saveas Counter: Despite the Faction disadvantage, Ira is a viable counter against Saveas due to a combination of her lethal ultimate damage (especially on higher levels) and her healing reduction poison. Both effects work well in countering Saveas’ survivalist niche as he can get bursted down by Ira’s ult with little way to recover health for a duration. Just make sure Ira is not directly infront of Saveas and instead is at the opposite location to set up an easy Sweep for Ira with her ultimate. utilizing Raine with this strategy is extremely lethal against Saveas and Shimera which are very common mid-game carries.

►► Shemira Counter: With both of them being an ultimate dependent character, they both function similarly in how they want to deal damage. However, Ira has the advantage in every way against Shemira due to a multiple reasons: Ira has faction advantage, making even normal attacks deadly against Shemira on Crit, Poison counters Healing Strategies and her ultimate is a very lethal burst while Shemira’s ultimate damage is low. These 3 quirks grants Ira great advantage against Shemira that the match up becomes too easy as Shemira will have a hard time suriving Ira’s Ultimate with its high damage and anti-healing properties. Place Ira directly infront of Shemira (position 3 vs a pos 4 Shemira) to quickly shred the tank protecting Shemira and set up a focused ultimate attack.

► Early Game: One of the best Guild Raid damage dealers in the early game due to her good attack damage and extremely high damage ultimate ability (800% BURST damage). Although she is a non-Survivalist hero, she is the best non-Survivalist Guild Raid hero due to her high DPS. If one does not have any Survivalists, Ira is the next best option to achieve a high guild score that can still rival Survivalists to an extent, especially with Luscius and/or Nemora.

► vs Soren: Ira is a great pick against Soren as Ira has a relatively low basic attack damage(this makes her a less lethal charm target) while also having Faction Advantage against S. Her high burst dmg is also great as Survivalist strategies are harder to work against Soren because of his charm, so dealing as much damage possible in a short time is one of the few strategies one can utilize to work around the charm.

► Energy Regen Artifact = BEST DAMAGE DEALER: As soon as Ira gets the Energy Regen Artifact, she jumps from a good Guild Raid dps into the Absolute Best Guild Hunt DPS hero in the game. When Ira equips Dura’s Call [Energy Artifact], Ira will cast her ultimate 2x every time Wrizz attacks with his ultimate (except the first Ira ult). This is because Ira will cast her Ultimate before Wrizz ults with the artifact. Wrizz then ults after Ira’s ult, refilling Ira’s Energy bar fully for a 2nd ult cast. This effectively doubles Ira’s Ultimate Damage output, the highest burst damage skill in the game! From 800/1200/1600% to 1600/2400/3200% BURST damage!
And it being a burst damage means it doesn’t matter if she casts her ultimate again immediately after her previous since she does not have to worry about her Ultimate Damage not stacking (Unlike Shemira).

► Sustain: When Ira gains the Energy Regen Artifact, she is best paired with Khasos as he is capable of regenting her health back to full when Ira casts her double ultimate. This turns Ira from a Top Tier DPS to a Top Tier Survivalist DPS in Guild Raid. However, without the Artifact, Khasos doesn’t heal Ira enough, making Nemora the better option as Nemora’s healing is more consistent throughout the whole team. And with this amount of healing and damage, (based on experiments) she is able to consistently deal about 50-100% more damage than all survivalist heroes in the game even on equipment disadvantage.