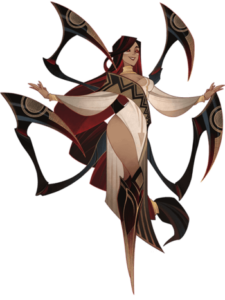 Ankihira is a fragile frontline hero who specializes in forcing the game to be Burst heavy by weakening the enemy frontline. With her very powerful, yet early defense reduction debuff, Ankihira makes sure the game will play her way. Fast and Deadly.

However, despite her burst heavy nature, Ankihira also has tools for the long game which includes a long duration stun, energy drain and a high damage non-lethal poison.